Robbie Williams could work for Mercedes-Benz

Robbie Williams could sell just about anything to anybody. Give him the famous pen test and he’ll sell the damn pen for a million dollars. Probably one of the best entertainers still alive, Robbie Williams turns out to be an amazing actor, too. He recently said he would love to work for one of Germany’s carmakers, because he is so tired of being a rock star.

“I’m a bit bored by the pop star rock star thing”, Robbie Williams starts his speech and he has an anguished expression upon his face that makes you believe he means every single word of it.

The man who gathered almost 400 000 people in one place for three concerts held in Knebworth 10 years ago is now touring the world and seems to have plenty of fun doing it, so please, don’t take his words for granted.

Apparently, the 25 years spent by him in the music industry, doing backing-vocals for Take That as he always complained and then going to rehab and getting fat and writing “Angels” and becoming famous and getting fat again, have been quite enough for him.

“I had a great career, but now I want to do something different. I want a job-job for the first time in my life. I’m a daddy now, so it’s only right that I should have one. I’ve been thinking through my options, of what my job-job could be… Soccer in Germany, maybe? No, I am too old for that! Something to do with fashion in Germany? No, I am too fat for that. Then I thought to myself: Germany has amazing cars… Give me a call”, he asks. Kind of a “Let Me Entertain You” call, isn’t it?

Actually he really got a call from Mercedes-Benz, but that was long before his mock announcement. In 2009, Robbie Williams starred in a TV ad for smart, correcting the guy misinging the words of his most famous hit “Angels”.

We can’t tell for sure whether Mercedes-Benz trusted his words, but back then, they replied to him on Facebook. They even promised him a Mercedes-AMG GT: “Robbie, your contract as social media manager for Mercedes-Benz Mixed Tape is awaiting for you. As is your company car.” 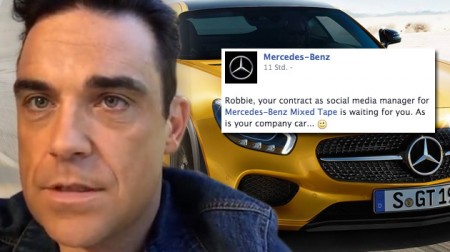 But Robbie never got the car. He is touring the world in his private jet instead. Oh, God, the life of a rock star can be so harsh at times…