Rioters torch cars in a Mercedes-Benz dealership during protests in the U.S.

Rioters have torched and trashed cars in a Mercedes-Benz dealership in Oakland, California. The protests have been taking place following the death of George Floyd due to police brutality.

The images are hard to watch. Protestors have torched several brand-new cars with zero mileage on the clock. George Floyd’s violent death, under the knee of a police officer, while being handcuffed, sparked furious protests across the country. The vandalism acts have become viral on the internet.

Oakland, California has become the capital of violence, after rioters robbed several luxury stores and broke into a Mercedes-Benz dealership. 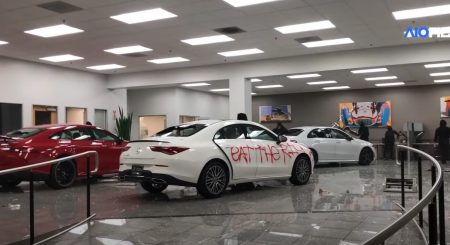 They sprayed paint on the body of the premium cars, broke windows, smashed hoods and torched them, while yelling “We can’t breathe”. Those were the last words that George Floyd uttered. The videos posted online show several C-Class, CLA, GLE and a Mercedes-AMG GT Coupe destroyed. They even drove in with construction vehicles stolen from construction sites, causing further destruction.

The barbaric acts have come to an end with the arrival of the police. Protesters also ransacked a Honda dealership in Oakland. They also drove off several cars from the showroom floor, with the driver intending to cause more damage.

Similar protests have taken place in New York, Atlanta, Minneapolis, Dallas, Chicago and Los Angeles. Most of them were peaceful, as people asked justice for George Floyd and required the stoppage of police brutality, especially against Afro-Americans.

The aftermath of the riot that destroyed the Mercedes-Benz dealership

The demonstrations were peaceful on Friday evening, but they turned disruptive through the night to Saturday morning.

Following the demonstrations, authorities have taken 18 people into custody. Six police officers were injured and are recovering. One federal security officer was shot dead at a federal office in Oakland, but authorities do not know yet whether this incident was related to the riot or not.