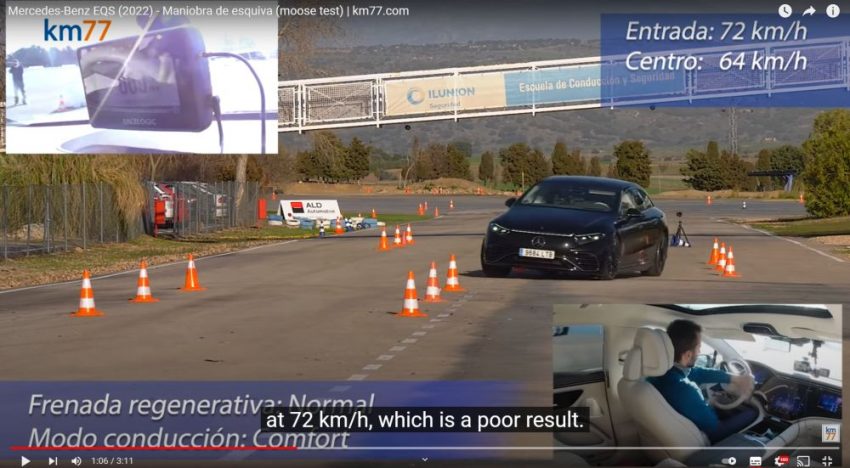 The Spanish website www.km77.com has tested the new Mercedes EQS in the very demanding test known as elch test. km77.com made this kind of test with all new models. The entrance speed was modest, only 72 km/h, and in the video you can find the explanations.

Everyone remembers the 1997 moment when the Mercedes A-Class rolled over following a previously unknown evasive manoeuvre. Because this test was carried out by a Swedish magazine and simulates an evasive manoeuvre by a moose, an animal that can appear unexpectedly on Swedish roads, it was named the elch test. Following this result, Mercedes then fitted ESP system standard to all A-Class models and then to all Mercedes models. Since then this test has been introduced into the test procedure by both manufacturers and major car magazines.

The Spanish website www.km77.com carried out the elk test with the new Mercedes EQS, a manoeuvre they perform when testing every new model. The test car, a Mercedes EQS 580 4Matic+, was equipped with an integral steering with a 10-degree steering angle. In all tests, the energy recovery system was set to Normal mode.

Thanks to the integral steering, the driver didn’t have to turn the steering wheel too much and too fast because the integral steering helps the car turn more easily. After a few attempts in which a few milestones were broken, the optimum speed at which the Mercedes EQS passed through the milestones without breaking them was 72 km/h. But this speed represent a poor result.

The Spanish website states that regenerative braking was on Normal mode and suspension was set to Comfort but body roll was moderate. The exit speed of 52 km/h was relatively high compared to the entry speed which means that the ESP system did not come into action too much.

Yet why couldn’t the EQS, which has such a sophisticated drivetrain, all-wheel drive and integral teering, pass the elk test at higher speeds?
One reason is the high kerbweight of the EQS because Spanish colleagues managed to achieve a higher speed with the Mercedes S-Class. And in the case of the S-Class, the test car was not equipped with the integral steering that is optional on the S-Class. Also, the S-Class performed better despite having a slightly softer suspension than the EQS.
The Mercedes S 580 4Matic Long has a kerbweight of 2115 kg while the Mercedes EQS 580 4Matic+ weighs 2585 kg, 470 kg more.

Colleagues at km77.com tried to pass this test at higher speeds, but failed at 76 km/h and 79 km/h when the car showed a rather strong understeer tendency. The attempts at 76 and 79 km/h were made in Sport mode but the test driver noted that there was no clear difference between Sport and Comfort mode.