November will be a busy month for Benz fans with both the facelifted 2017 Mercedes GLS full-size SUV and the SL roadster expected to debut at the 2016 LA Autoshow.

Following the successful Frankfurt launch of the C-Class Coupe and S-Class Cabriolet Mercedes strives further and prepares two confirmed fresh models before the end of next month. True, Daimler has not yet officially confirmed the name of its show stars, but it’s more than safe to assume these will be the aforementioned GLS and SL.

The only significant motor show planned for the end of next month is none other than the L.A. Autoshow (held between the 20th and the 29th) so again it is easy to pin point this particular venue as the exact location of the two confirmed launches.

Heading back to the actual show stars, the 2017 Mercedes GLS and SL, we’ve already covered extensively the design and technology modifications meant to give the two a significant boost. 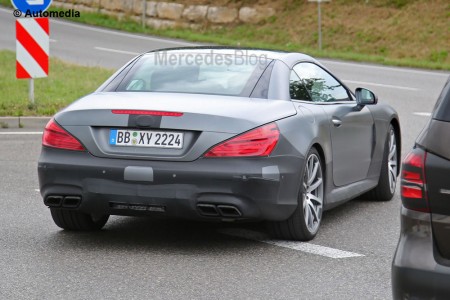 Don’t expect big changes under the bonnet for the refreshed Mercedes-AMG SL 63. The current line up will carry over mostly unchanged with both the V8 and V12 (SL 65) powered variants pegged to remain on offer. Even the old-school 5.5-liter supercharged V8 will likely live on in spite of the newer ballistic 4.0-liter twin-turbo counterpart of Mercedes-AMG GT fame making the rounds these days – it will only show up on the next-generation SL.

Design-wise, the 2017 Mercedes SL’s facelift will mainly revolve around the redesigned headlights – similar in style to the ones used on the S-Class Coupe. These are joined by newly-shaped lower air intakes, the newest iteration of Mercedes-Benz’s front grille, as well as a pair of redesigned taillights and rear bumper with more prominent exhaust pipes, at the rear. Inside, the infotainment system will get a major overhaul with the C-Class’ style rotary control system and larger touchscreen all expected to make an appearance.

SEE THE FINAL DESIGN OF THE 2017 SL HERE

The 2017 Mercedes GLS on the other hand will feature more significant modifications starting with the all-new name. The interior was also the main focus of the revision campaign. Mercedes knows the GLS will face fierce competition in the new Bentayga, Bentley’s first-ever SUV making a big step up in therms of fit and finish plus an all-new infotainment system lifted straight from the recently upgraded GLE smaller sibling, 8-inch color screen and rotary controller included. 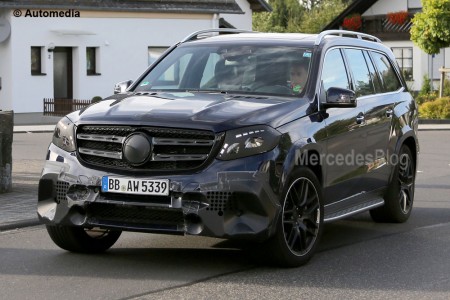 Also borrowed from the GLE is the adaptive drive train and the off-road mapping with its four different settings. At the exterior, the 2017 Mercedes GLS comes with new headlights, grille assembly and bumper plus a new pair of tail-lights featuring LED technology.

No big technical surprises in the GLS’ sleeve. The GLS 350, GLS 450, GLS 550 and GLS 63 AMG variants will carry on unchanged alongside the recently introduced GLS 400 equipped with a twin-turbo V6 3.0-litre producing 333 hp.

November couldn’t come any sooner, then. More new models mean more success and since Mercedes is already growing faster and healthier than its arch-rivals BMW and Audi it is only a matter of months, not year, till our favorite brand becomes the number one premium carmaker in the world.