Raptor vs Predator: the American pickup truck vs the German G500 4×4²

The world famous Top Gear car show put the American pickup truck, the Ford Raptor, on the same off-road playground (or should we say “fighting ring”?) with the German Mercedes-Benz G500 4×4². Let’s see what came out of the third degree encounter.

The duel of the monsters is a 2-minute long video, a teaser for the upcoming Top Gear show. The clip starts by showing muscle details of the two behemoths, all presented in slow motion, while a slow-paced country song plays in the background.

But the music suddenly switches to a rumble and the bullfight begins. The Ford Raptor jumps over some sand dune and looks like it is just going to just glide along for a while.

The Mercedes-Benz G500 4×4² is no goof, so the German giant braves upgrades and runs to catch the Raptor through water and mud. Power slides in the puddle, you don’t see that very often, don’t you?

The American Raptor and the German Predator swoosh through the swamp and march along, courteously switching the leading spot and flashing at the camera. 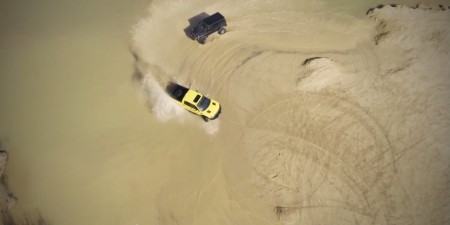 Those are figures that anyone would be green with envy for. Even the Raptor! With a 6.2-liter V8 engine under the hood, the pickup truck can boast with 411 HP and a 588 Nm torque. But it only features a 760-millimeter fording angle, only a 29.8° approach angle and a 22.85° departure angle.

Now that the two monstrosities displayed their giant muscles and got their hands (actually we mean wheels, body, windshield and everything!) dirty, we are dying to see the whole thing.