Rafael Nadal, not happy about the Mercedes-AMG GT S he received

Rafael Nadal received a Mercedes-AMG GT S after winning the Stuttgart Open in 2015. A 510-horsepower beast, that can do the 0 to 100 km/h in just 3.9 seconds. The Spaniard has though recently shown a bit of disappointment. He just hates the color of the sports car.

“I don’t know if I can change the color, because the color is a little bit too much for me”, said former number one, Rafael Nadal, after receiving his Stuttgart Open trophy and prize. 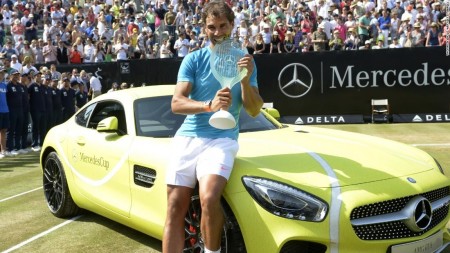 Mercedes-Benz has been the sponsor of the annual tournament for 35 years, providing the car for the winner. However, the winner is not always content. And this particular one can’t even begin to look at the bright yellow GT S, that resembles the color of tennis balls. The former King of Clay has been a brand ambassador for the South-Korean-made Kia for almost a decade. “It’s not a Kia, but it’s still good”, Nadal tried to make up for his lack of diplomacy.

Currently listed 10th in the ATP ranking, the 31-year old Spanish player defeated Viktor Triocki in the 2015 final. It was his first title on grass since 2010, before flying to United Kingdom for the prestigious Wimbledon. We bet the Serbian would have loved the AMG with eye-damaging color more.

The Mercedes-AMG GT S is powered by the already familiar 4.0-liter V8 and can hit a top speed of 310 km/h. That is way faster than Rafael Nadal’s service speed.