Rafa Nadal gets a Mercedes-AMG GT S. Isn’t he a lucky guy?

Rafael Nadal gets the first Mercedes-AMG GT S ever awarded after winning the Mercedes Cup tournament in Stuttgart. The Spaniard defeated the Serbian Viktor Troicki and got his first title on gras since 2010.

This past Sunday was the best day of his past four years for Rafael Nadal. He proved he’s still in the game on grass, even though the last tournament won by the Spaniard on this surface was Wimbledon, in 2010. He played two sets against Troicki, 7-3 (7-6), 6-3 and got himself the Mercedes Cup and the Mercedes car.

Rafael Nadal is the very lucky owner of a Mercedes-AMG GT S, the first car even awarded as a prize in a competition.

It has been a bumpy ride for Nadal towards the final of the tournament. On Saturday, the former number 1 had defeated Gael Monfils in a straight sets victory and made his way into the final for the first time on a grass court this year. The success in Stuttgart will be boosting both Nadal’s confidence and position, since he had dropped to number 10 in the ATP rankings. 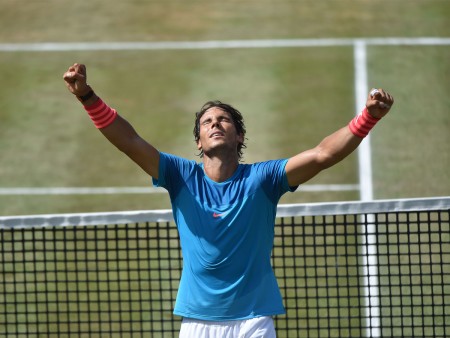 Except for the solarbeam AMG GT S, Nadal will get 104.600 euros and 250 ATP ranking points. It was a big fight along the way for the 510 HP latest sporty built by AMG. Another Spaniard, Nadal’s good friend Feliciano Lopez, was dreaming of getting his hands on the wheel of the car: “If you want to beat me, you have to give your best. Grass is my best surface and I want to win the car”, he had warned Nadal.

The man who won the trophy in Stuttgart 31 years ago, Henri Leconte, has already tested the GT and wanted to keep the car keys: “This is an outstanding car with a great facility of driving. I love it! It is such a beauty, especially in this colour”, the Frenchman said. And yeah, Rafa Nadal is one lucky guy! He got behind the wheel on the grass court, but was not allowed to start the engine. Just wait to get on the highway, Rafa!