Elena Luchian, May 6, 2016
2.64K 0
Home Lifestyle Queen of Parts – Elizabeth II gets her portrait made entirely of car parts

Is that a Mercedes-Benz suspension? Is that a BMW wheel? How about those Jaguar axles? A car service made Queen Elizabeth’s portrait entirely of car parts to celebrate Her Majesty’s 90th birthday.

What does the Queen have to do with car parts? It may seem completely out of place, but, before she was a queen, Elizabeth II was a mechanic. During the Second World War, she served as a car expert in the Women’s Auxiliary Territorial Service.

Still a teenager back then, young Elizabeth insisted on learning change wheels and even dismantle and rebuild engines. She also learned how to drive an ambulance. 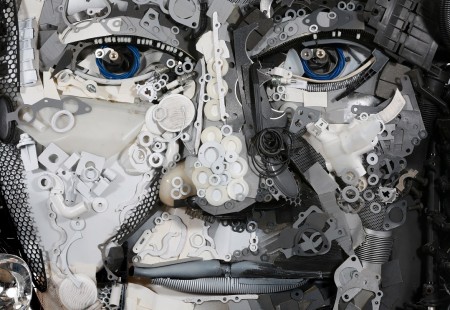 To honor the Queen’s service and pay homage to her work as a mechanic, a car service from UK, Kwik Fit, teamed up with artist David Parfitt and created a very unique piece of art and called it “The Queen of Parts”, hinting at Lady Diana’s moniker “Queen of Hearts”.

The portrait of the royal mechanic and driver incorporates no less than 800 car and truck parts, mostly British ones, and over 50 meters of hoses to build the monarch’s iconic hairstyle. Her blue eyes are made of blue hoses rolled again and again. The queen wears a crown made of spark plugs, earrings made partly of headlights and a necklace made of wheels. The mechanics spent approximately two weeks on the 3-meter tall portrait that weighs 115 kilograms.