If we enjoyed the presence of a new Pullman generation this year, at the Geneva Motor Show, built under the Mercedes-Maybach designation, we found it is well-timed to go back a little, through the scent of past, to the moment the Pullman became a benchmark brand in the industry of genuine luxury.

As in the previous feature of fascination, in which we made acquaintance with the history of a superb Mercedes-Benz 540 K Cabriolet (click here to see), the encounter with a new full-hearted iron occurred in the enclosure of the Ţiriac Collection, in Otopeni (on the outskirts of Bucharest), in an authentic halidom of the automobile god. It is the place where, as in any grand auto museum in the world, you step into, gulping nostalgically, but with eyes sunk in bliss. The place where you will meet the dreams of childhood all over again and which you leave wuth dodgy steps.

This is sure thing, that the most baffling moment is the one you leave behind the jewels which did, do and will  mesmerize you hereafter and the moment I stepped away from the ’68 Pullman certified this. Because it, the presidential, has, together with the cluster of Rolls-Royce “phantoms” in the great tennis player Ion Ţiriac’s collection, a particular statute. It is demanding to talk of luxury and of premium concept in 2015, a year when each carmaker, once a vile one, now has something for the superior segment in their household. It is effortless only if your name is Mercedes-Benz and not because you moved up in this league, but because, most of the times, you where the one making the rules. 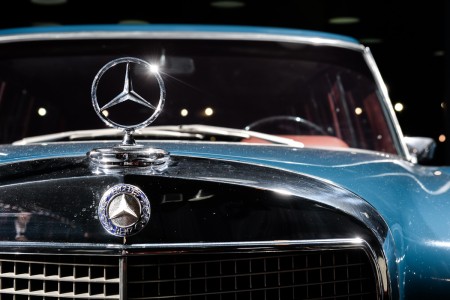 Just as much as it happened in 1963, when coming out of the product design line and going into the production one, there was an automobile that is still carrying it off with a high-hand, generation after generation – the Mercedes-Benz S 600. The generation with the W100 code name, an automobile that aimed luxury, refinement, nobility and exclusivity. 2.677 Mercedes-Benz S 600 ”guys” were produced between 1974-1981. 2.190 of these jewels were built on a short chassis version (the SWB), 59 were the Landaulet type (an elongated chassis with a semi-convertible roof – leaving only the back seats unhoused, and 304 were LWB versions, baptized as Pullman. The crown jewels were the 124 units that had the fortune of being metamorphosed into Pullman versions with six doors each. And we now present one of them right here. 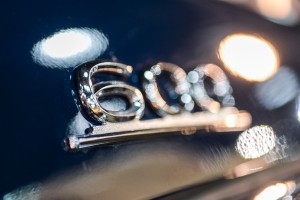 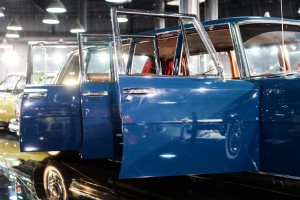 With all due respect, from Romania!

Thus Mr. Ion Ţiriac is the owner, among so many wonders, of a gem conceived by the magic eyes of Bruno Sacco, Friedrich Geiger and Paul Bracq, during an era of universal beauty. The automobile in the Ţiriac Collection was manufactured in 1968 and wasted tires around the world for 57.395 km. Now, it sleeps such a beautiful sleep next to another S 600 Pullman, but his brother only has four doors. 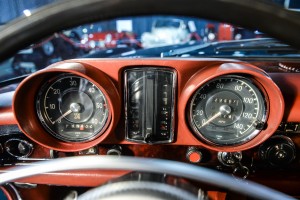 If we mentioned the covered mileage, it is all right to stick our noses under the colossal, massive hood, which reveals a power mill, reminding you exactly of the times when the German automobiles earned their proverbial aura from which they still benefit today. 6.332 cc where divided to 8 cylinders in a V layout, which produced 250 HP and 500 Nm (from 2.800rpm). We are not talking about some arresting power, but it was not about course force, but about refinement; lots of it. An automatic 4-speed transmission made the most of the power and engine torque, and its lever was placed, as for the most contemporary Mercedes-Benz models, on the right side of the steering wheel. 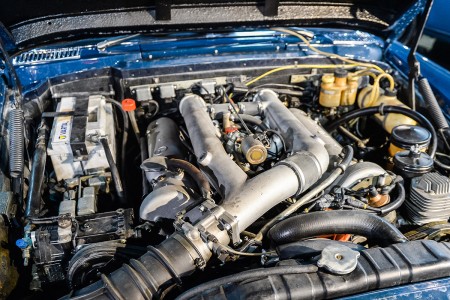 The engine used to be cooled off with water, it embraced and effective solution of a single SOHC type cam shaft for the distribution system and the injection system was built by Bosch. I guess if no one should have complained about the fuel consumption (approximately 26 l/100 km), especially during those bohemian times even at the supply pump, for an aircraft-automobile, the range was so important, that the Germans fitted their spoiled one with a 112-liter fuel tank. And it was pretty much needed, as the chubby had a 2.770 kg kerbweight and was able to flawlessly function with a total weight of 3.340 kg.

A sophisticated hydraulic system ensured the efficiency of the windows and of the electrical seats, of the boot lid and of the automatic closing gear, as the adjustment of the ground clearance was automatic even back then. 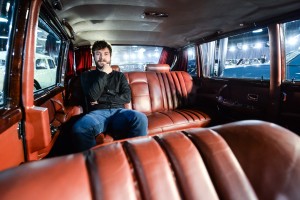 Back then when, in order to become the owner of a Mercedes-Benz S 600 Pullman, you had to carry 60 000 Deutsche Marks out of the treasury. Quite small fortune. Well, it was not for no reason that only 124 fortunate people enjoyed to creep their lives through the four doors which seemed to teleport them into the mobile living room. Life on board was a fairytale. If there is not much to say about the front seats, maybe only the fact that the driver took time to fit in with all the controls, all the switchers and little buttons, at the rear, there was a whole different story. Only the flight attendands were missing, to make this metaphorical, because otherwise, the terrestrial aircraft supplied for everything. 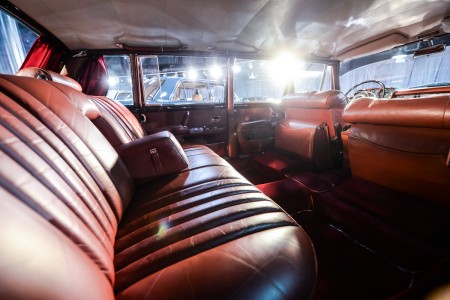 The best quality leather covered the armchairs prominently comfortable. The 3.990 mm wheelbase (the total length was of 6.240 mm) allowed travellers to feel as if in a spa. And there is more. Two seats were draped into the floor for the eventual bodyguards, but when they were not on duty, there was serious airing inside the mobile living room. The thick fine windows curtains, the climate control and the audio system were adjustable from the rear, the partition glass wall between the driver’s cabin and the master’s lounge (optionally provided), all of these pulled together the supreme auto ambience.

The sweet taste of power

This is what this is about, once you were on board the terrestrial aircraft. The great names that owned or still own this automobile, some in impressive car collections, stand to prove it. Apart from Ion Tiriac, the welcoming of the W100 Pullman generation was cheered by John Lennon, Aristotel Onassis, Hugh Hefner, Elvis Presley, Coco Chanel, Eliyabeth Taylor, Jay Leno, Jack Nicholson, Pablo Escobar, and even the Pope’s garage was quietly waiting for one. And stars are not the only ones to benefit from the boundless glamour, as many of the world leaders marched, on special occasions, with such an entourage – Fidel Castro, Kim Il Sung, Pol Pot, the Emperor Hirohito, Saddam Hussein (he loved being admired in a Landaulet), Kim Jong-Il, Josip Broz Tito, Mao Zedong or even the Romanian dictator Nicolae Ceauşescu. 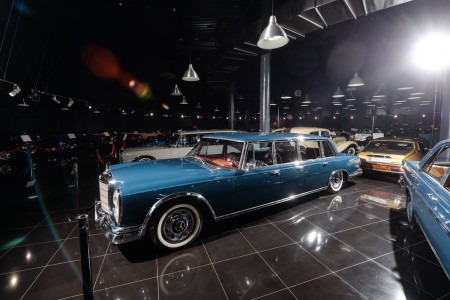 Even now, decades from the moment you could call it a high-end vehicle, the Mercedes-Benz S 600 Pullman (W100) leaves you mused when you hover around it. It is undisputably glamorous! August and good-natured both. It is repulsive for the feeble-minded, but welcoming for those who have the bravery of reading stories, thrifsts, histories on it. And everything climaxes the moment you take a seat on the bench, where once, history was (actually!) made. You feel it in the air how it is to play the people’s fate in chess, to have absolute power, to tacitly move your finger; or, artistically speaking, how it feels to bring beauty among your people as the minstrels once did.

Starting this year, we get a new Pullman, a proof that Mercedes-Benz takes its brains from the history. The Lord is more glamorous than ever, a reasonable ground for being part of the ultra luxury Mercedes-Maybach new division from this moment on. In order to understand the aura that a Pullman declination even had in the past, we tell you this much: the purchase price for the 2015 generation starts somewhere around the 500.000 euros figure. Caution, it is only the starting price (!). 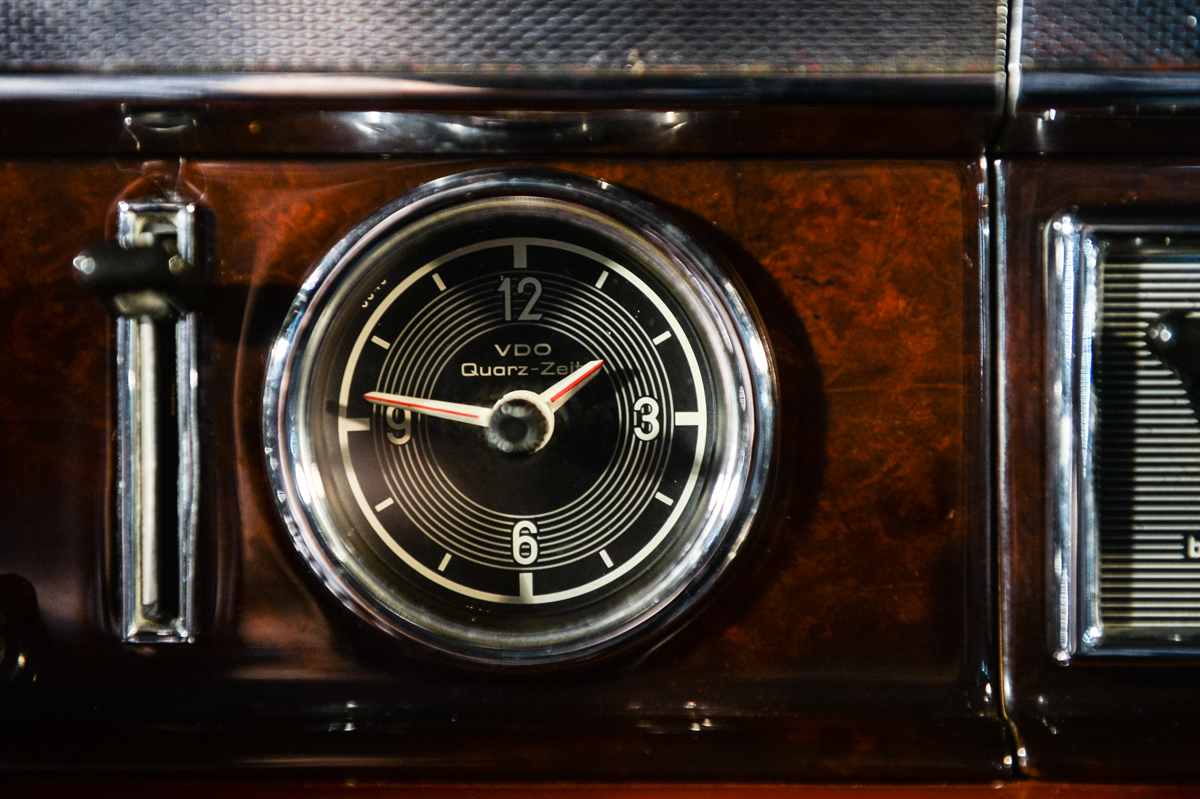 And for the money, you get a 4.418 mm wheelbase, because this is what it is mainly about. About the indulgence offered to the 2+2 passengers of the lounge that is divided from the driver’s ”cabin” by a partition electrical glass wall. The armchairs can recline to 43,5 degrees, to recreate the private jet atmosphere. Leather? It only makes sense, everywhere; the best of it. A refrigerator, a 18,5-inch display and and just about all you can think of. More than that, if you get cold feet, you can select an armoured skin done by the book to the 6.499 mm long ”little” one. But for that, the price starts at about 1 million euros.

The new Pullman will be enlivened by a refined 5.880 cc engine, in a blue blood structure – the V12. 530 HP and 830 Nm are delivered to the driver, but not for some dynamical joy, but for a particular experience of terrestrial transportation. Keeping the spirit of the original model is truly important. Meaning the exact same spirit that you can ”scent” and gets under your skin when you get by the beautiful W100. A spirit for which doctor Dr. Rudolf Uhlenhaut, one of the pioneers of that generation, got, at the moment of his retirement – a coupe; one of the two units ever built. 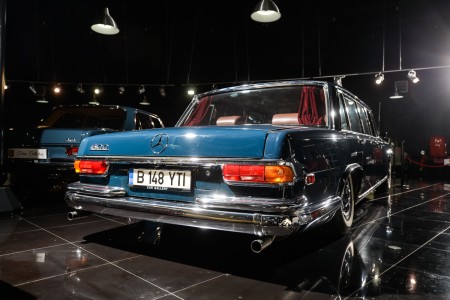