Vision GST was presented first on an american international event because it fits much better to the american style. The americans want spacious and comfortable cars, qualities which are seen in sedans, station wagons, monospaces or SUV.

Vision GST was different from all of these categories combining the best features of all these concepts.

Vision GST was a long distance tourer for up to six people and had a very generous interior. Vision GST had a length of 5.13 metres, identical to the length of the long wheelbase Mercedes S-Class, it was 1.92 metres wide and 1.65 metres tall with a wheelbase of 3.22 metres. 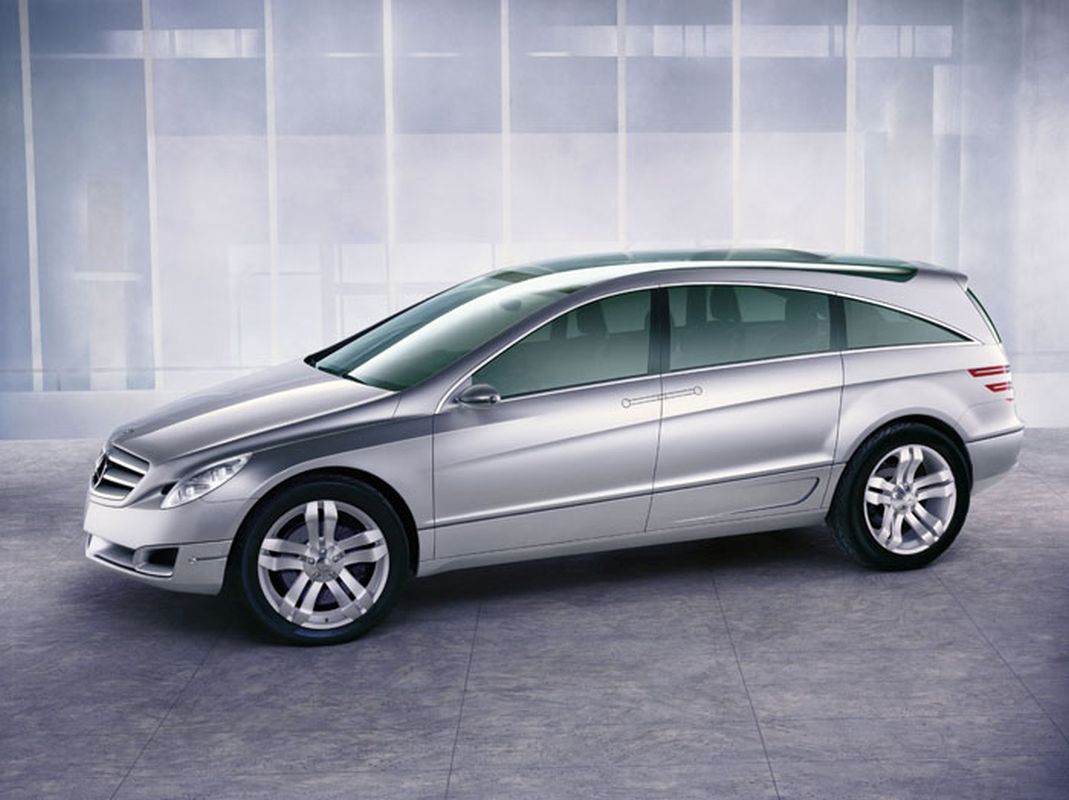 Mercedes declared that more  than 44% of the body volume was dedicated to the passenger compartment – a ratio unmatched by any luxury class sedan.

Vision GST was a very spectacular concept. It has no B-pillar, the door handles were integrated in the doors and glide out at the touch of the sensor button and the long roof, streched from the A to D-pillar, was made from special electrotransparent glass. The level of tinting could be varied depending on the intensity of the sunlight at the press of a button.

The doors are opened at an angle of 90 degrees which provide a very convenient access.

Vision GST was equipped with a high-quality rear seat entertainment system: two eight inch colour screens in the back of the front head restraints, a CD/DVD player and a digital TV receiver for the second row and a swivel mounted colour monitor plus another CD/DVD player for the third row. The interior was very practical and modular: the all four individual seats from the second and third row could fold and the rear centre console could be removed increasing the cargo space to an excellent value of 2030 litres.

Vision GST was powered by an AMG modified V8 with 5.5 litres and 360 HP which distribute the power to all four wheels.

Vision GST 2 used a diesel hybrid propulsion which combine a V8 turbodiesel with 250 HP and an electric motor with 68 HP. The electric motor was powered by a rear mounted 270 V nickel metal hybride battery with a capacity of 1.5 kWh. With this propulsion, Vision GST 2 accelerates from 0 to 100 km/h in only 6.6 seconds and reach a maximum speed of 250 km/h, thanks to an impressive torque of 860 Nm. The propulsion system was a full hybride which means that the electric motor could move alone the car at low speeds helping to achieve a fuel consumption of 7.9 l/100 km.

Both versions GST and GST 2 had new front an rear axles in combination with Airmatic suspension and 4 wheel drive.

Vision R appeared in autumn 2004 at Paris Motorshow and was more adapted to the european requirements. The wheelbase measured 2.98 metres, with 23.5 cm less than Vision GST 2. With 4.92 metres, Vision R offers a configuration with 4+2 seats.

Vision R was powered by a prototype of the new V6 diesel 3 litre capacity with common-rail and variable turbine geometry which deliver 218 HP and 510 Nm.

Vision R was the last stage before the series production car which was named R-Class. Unhappilly, R-Class was not a successful car despite the fact that public response was massive after the first presentation at Detroit in January 2002.

The configuration with two individual seats in the second row was one of the problems, but even after Mercedes offer aditionally a rear bench at the facelift, the sales were not booming. On the other side, in the configuration with six seats, the boot volume was extremely low.

R-Class does not have rivals from other carmakers because it was unique, but it has to face an internal competition with ML-Class and GL-Class.

The good news is that Mercedes does not give up to this idea and there are big chances to see such car concepts in the future Mercedes model lines.