Mercedes-Benz is opening the gate for the new EQC. The premium car maker has made several photos public, showing a third-degree encounter between the pre-production model and the concept revealed last year.

The Mercedes-Benz EQS will hit the showrooms in 2021 and will be revealed later this year, but until then, Mercedes-Benz shows teaser images of the future electric luxury sedan. The photos posted on social media were accompanied by the caption “Magic moment” and they show how faithfully the pre-production version follows the lines of the Vision EQS concept. 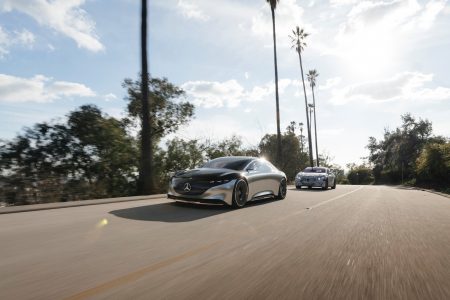 The prototype still wears the black-and-white camouflage that it is covered with each time it is caught by the spy photographers, testing on public roads. But it can still be noticed that it echoes the shape of the concept. A front fascia with a flowing rounded shape and a tilted windscreen can be seen in both. The roofline descends towards the rear, hinting towards the forms of a future 4-door coupe. Yet the prototype seems to be somewhat taller than the concept, as Mercedes might have had second thoughts concerning the headroom.

As the previous teaser images have shown, the EQS will future a couple of angular headlights, which may integrate as many as 940 individual LEDs. 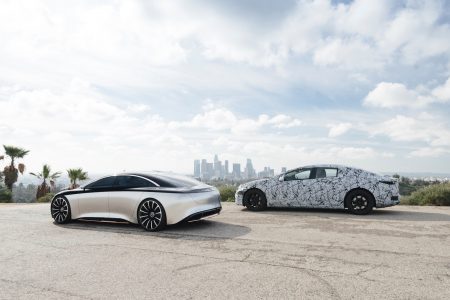 The interior of the sedan should receive the freestanding digital instrument cluster and the tablet-like infotainment system, similar to that of the redesigned S-Class and to that of that previewed by the EQS concept.

A lithium-ion battery with a capacity of 90 kWh is expected to be paired with two electric motors that will deliver more than 400 PS. The data regarding the range of the electric sedan is still under wraps.