Pope Francis blesses the first ever Vito made in his home country, Argentina

Pope Francis has made a reputation for himself to be the most open-minded pope the Christians have ever got. His latest stunt was a ceremony held at the Vatican for the first Vito produced in his home country, Argentina.

The car traveled half-way around the world to get the blessing. The Mercedes-Benz Vito that was blessed at the Vatican was the first such vehicle to roll out of the assembly line of the Mercedes-Benz plant in Buenos Aires. The head of the Roman Catholic Church has also put his autograph onto the chassis of the bright white Vito Tourer. The vehicle so blessed by the Pope was donated to the nonprofit organization Scholas Occurentes, supported by Pope Francis. The car is to be auctioned later on and the money fetched will be forwarded to sports, art and technology projects run by the organization. All these actions target the integration of the socially disadvantaged children and teenagers into society.

Mercedes-Benz has been involved in helping the children with social needs in Argentina for a year already. In the country of Maradona and Messi, the carmaker offers support to a football school for socially disadvantaged young people between the ages of 6 and 18 years old. The soccer school was founded by the employees of the company together with the SMATA Union. Argentina Scholas Occurentes is also active in about 70 other countries around the world. 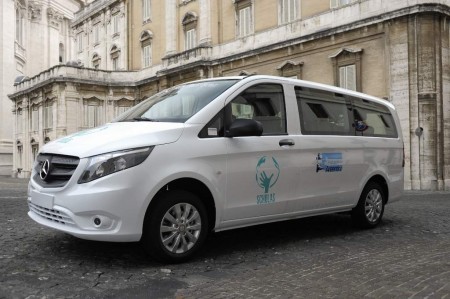 June 2015 was the month that saw the production of the Vito start, at the Mercedes-Benz “Centro Industrial Juan Manuel Fangio” plant in Argentina. The production and market launch of the mid-size van in the South American country is part of Daimler’s growth strategy “Mercedes-Benz goes global”. That is a business strategy targeting the further extension of the technology leadership of Mercedes-Benz Vans, expanding the current regional activities and tapping new growth potential outside the European markets.

220 million dollars were invested in the plant located in Buenos Aires starting 2013 up to the present date. About 1600 people work for the three pointed-star brand. The Vito will keep the Sprinter company. The Mercedes-Benz Sprinter has been produced in Argentina since 1996.

Pope Francis has recently ditched his Mercedes-Benz Popemobile for a Hyundai, claiming that the Benz was far too good for him.