Elena Luchian, May 1, 2019
1.66K 1
Home Mercedes Benz CLA-Class “Play by your rules” – This is the video promoting the new Mercedes-Benz CLA

An emotional short movie accompanies the sales release of the new Mercedes-Benz CLA. The 5-minute film tells the story of youth and adulthood and focuses on the attempt to fit in.

The video reveals an adult character looking back on the dreams of his younger self. It is the manner that Mercedes-Benz encourages people to follow their inner voice and to do the things that matter in life. “Play by your rules” is the slogan that accompanies the campaign.

“A unique car for extraordinary people – this is how we see and present the new CLA Coupé. The film speaks the language of a young, confident target group which is true to itself”, Bettina Fetzer, Director Marketing Mercedes-Benz Cars, explains the idea of the film.

The new CLA campaign goes beyond the usual, as the premium car maker virtually opens the door of an imaginary world, via the Instagram Augmented Reality Filter #PlayByYourRules with several variations. The filter modifies photos using the typical neon lights inspired by the Japanese capital, Tokyo, where for the photo production of the CLA Campaigns print ads. 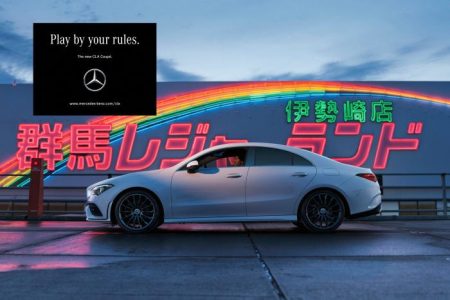 The all-new Mercedes-Benz CLA Coupe was introduced in January, at the Consumers Electronics Show in Las Vegas. Equipped with the artificial-intelligence-based MBUX (Mercedes-Benz User Experience System), the high-tech coupe keeps its sleek silhouette in a more modern approach and taking ever further the values of the 4-door coupe.