The all-new Mercedes-Benz G-Class is preparing for its debut, but little does Mercedes know about keeping secrets. As the anticipation grows, more and more photos end up online. Today, more images of the G-Class interior have surfaced to show us that the military icon is now one plush means of transportation.

January the 15 is the big day of the official debut, but we have already been treated to a few official photos of the interior and a few leaked others of the exterior, that confirm that the G has kept its iconic boxy design. A warrior with elite manners its seems to be, since the interior has gone through a complete makeover, borrowing details from the company’s exclusive sedan, the S-Class. 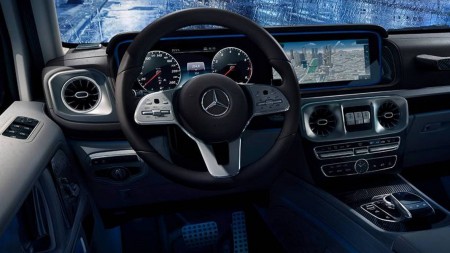 PHOTOS OF THE EXTERIOR OF THE NEW MERCEDES-BENZ G-CLASS

The retro design, loyal to what it was from the very beginning, a military vehicle, hides a plush interior that perfectly makes sense in the company’s design trend. Keeping the outside appearance of the off-roader that saw the light of day in 1979, Mercedes fitted a luxurious extravagant modern interior into it.  A new infotainment system, a Burmester sound system, high-end assistance systems and a significantly roomier cabin, since the G is expected to grow in width and length, will all fit in the revamped G. 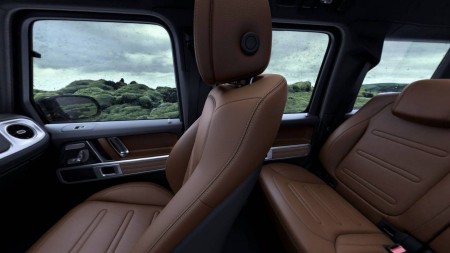 The nine-speed automatic transmission together with a torque convertor will also be fitted in the 2018 G-Class, together with a new independent double wishbone suspension at the front and a rigid rear axle. The buttons for the three lock differentials are still in place. The Mercedes motorized soldier will receive an increased ground clearance, standing proud at 241 mm from the ground (6 extra from the previous model). The technology upgrade will surely include a 360-degrees high-definition camera that can provide further safety on rough terrain, where the G feels at home. The new G-Class has already been tested. Find out HERE how it behaves in the great wilderness.

In terms of engines, the G550 model is supposed to take the AMG-made 4.0-liter turbocharged V8 with 415 HP, while the G63 will settle for the same engine in a more potent variant, at 603 HP. The G65 should drop the V12, with a hybrid powertrain filling the space left empty by the super power unit.