Fresh-air cruising down the highway or flying low with 300 km/h? Open-Air-Turbos treats. But how do fast cabrios fare on the track? Auto motor und sport pits the Mercedes SL 63 AMG with 585 hp against the BMW M6 Convertible Competition package with 575 hp.

The two open-air athletes already engaged in a similar comparison test, last July. So what changes since then? Mercedes SL 63 AMG 5.5-liter V8 biturbo engine got a power bump to 585 hp and, more interestingly, a standard limited slip differential. The new SL accelerated a tenth of a second faster to 100 km / h and was three seconds faster to 200 km / h. 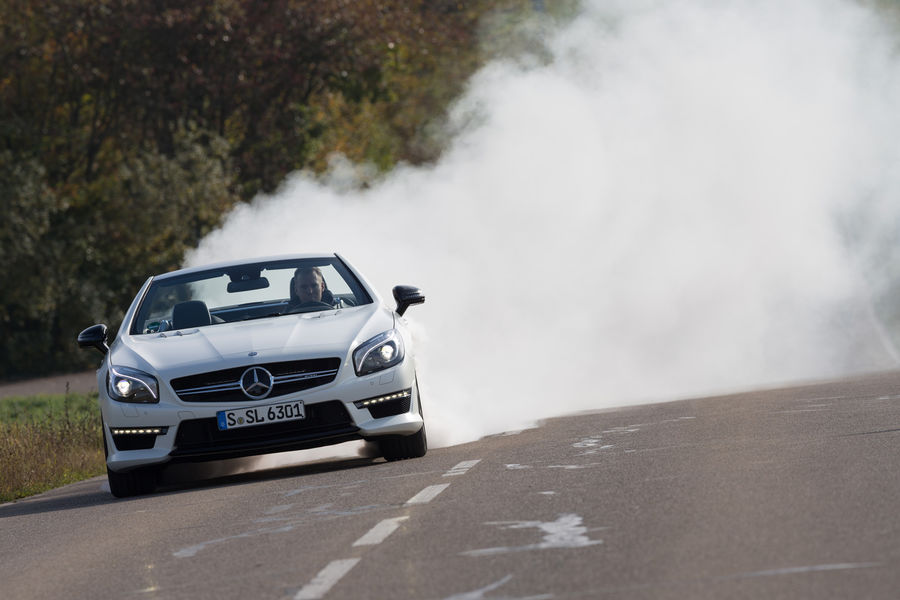 Significant improvements showed up in the SL’s braking system. Fitted with the optional ceramic discs (€ 8,270), the mighty Merc was faster to react with a 36.7 m braking distance, compared to 39.4 m last July. Fading or other failure symptoms are out of question. The M-carbon ceramic braking system (8,800 euros) equipped BMW M6 Competition Package gets similar levels of efficiency (36.90 m). 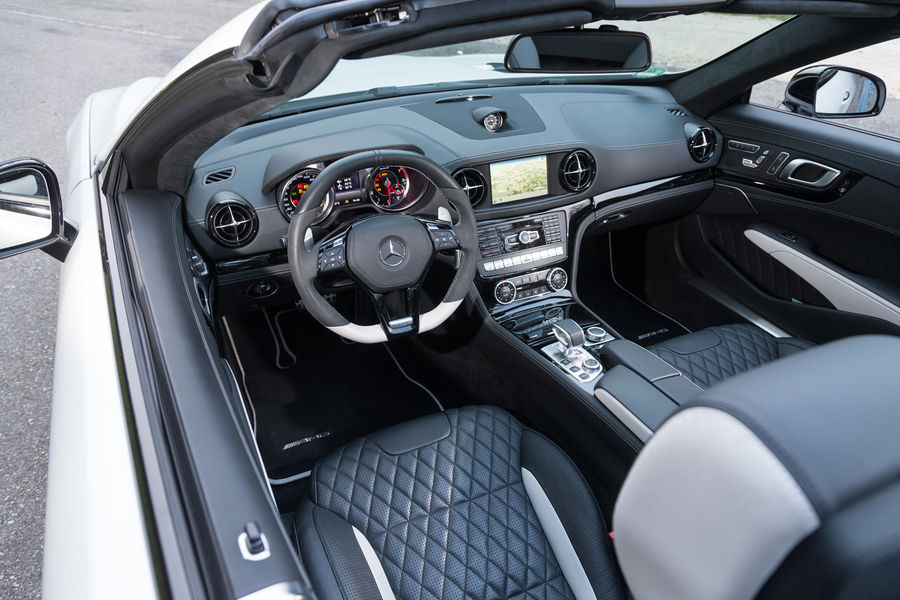 Roof down, enjoy the sound enjoy! If the V8 biturbo BMW rather deafened the tester with its artificial bass, the powerplant signed by AMG sounds throaty and meaty. However, the emotional carnival made by the naturally aspirated engine of the previous M6 and SL-63 aggregates cannot be equaled by their newer Biturbo counterparts.

Maximum torque of 900 Nm helps the Mercedes eclipse the 680 Nm in the BMW. Leaving the driving aids enabled best suits the SL 63 gallant nature, the Merc being more comfortable than the BMW M6 Convertible.

How often the electronics in the SL really release the full power of the car, you do not know, only seldom you see a nervous yellow flashing ESP lamp. Whether on highway transverse joints or road bumps: the ESP lamp flickers like a billboard in New York’s Times Square in the BMW M6 Convertible. 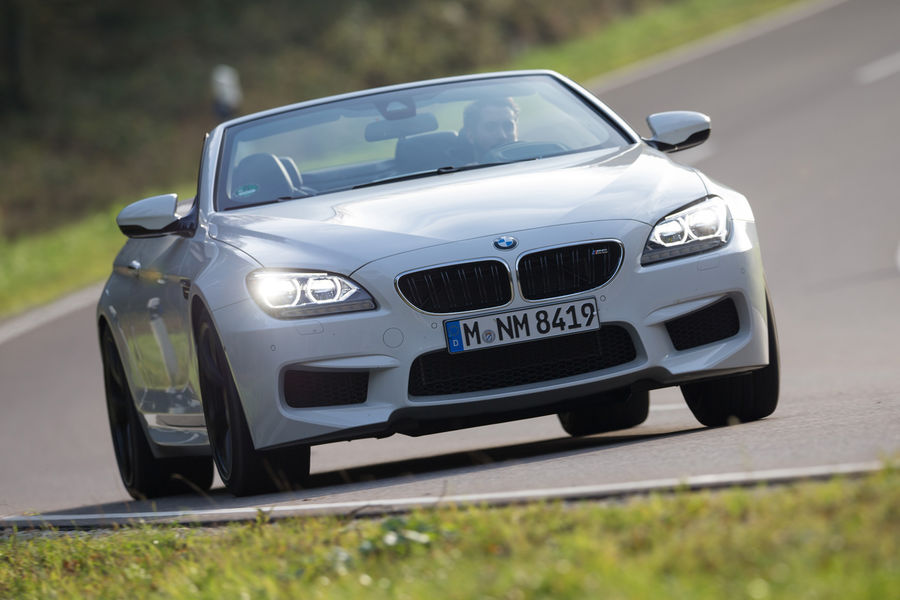 That doesn’t mean the BMW is not good. On the contrary. It is very well balanced, has great grip on the front and rear axles and surprisingly neutral handling, steering in Sport Plus with honest feedback. Transmission shifts quickly with no delay. With a lap time of 1.14,7 minutes the Competition-M6 is 0.7 seconds faster than the “normal” Convertible with 560 hp.

In the case of the SL 63 AMG, the feedback from the steering is precise, but a bit too easy. In direct comparison with the tight M6’s steering the SL feels a bit synthetic. While the ceramic brake system convinced with uniform delay values ​​of up to 11.5 m / s2, the Conti tires limited the ride. The fastest lap recorded for the SL 63 was 1.13,1 minutes. The outside temperatures were still 26 degrees Celsius high.

The SL 63 AMG went a little out of breath. As the data record shows later in the lap time comparison, the passage from 150 km / h was not quite as strong. Because one has thermal problems and reduces engine power as a precaution? Subjectively, it seems. The Mercedes SL 63 AMG drove around the track in 1.14 minutes. That was last July. Now, a series of cooling malfunctions made the testers send the engine from Hockenheim straight back to Affalterbach, for checking. But according to AMG the diagnostic device reported no problems. 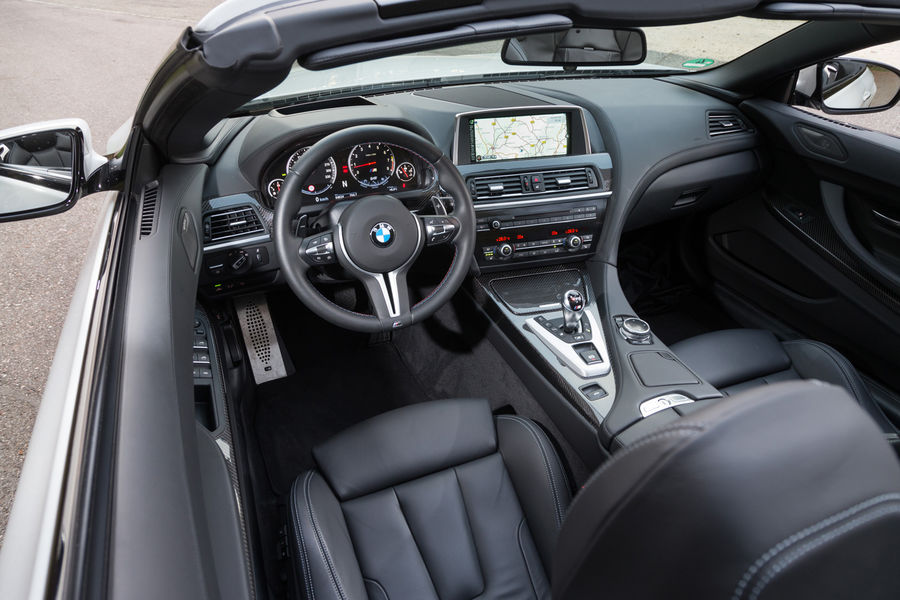 The BMW M6 Convertible was also left stranded with a cooler defect. A piece of debris lying on the highway, which was thrown by a preceding vehicle, hit the BMW in its snout.

The verdict is unequivocal. Weight continues to be an issue in both cases. With 2,027 kilos (M6) and 1,847 kilos (SL), both convertibles are probably more likely to be found in the VIP parking areas of race tracks than the straight the slopes. Still, the two big boats can fare surprisingly well on the race track, if needed.