German magazine Autobild has published the first official photographs and passenger ride of the all-new 2017 Mercedes E-Class Cabriolet, ahead of the luxury drop-top’s premiere this Spring. Read on for their exclusive impressions. The chassis, as much as it can be judged from the passenger seat, provides a successful compromise between comfort and agility – it is lowered by 15 millimeters in comparison to the sedan and operates with a deft precision. There’s a small amount of body lean when you corner hard in Sport mode, but otherwise it’s surprisingly agile, with progressive and predictable handling when pushed hard. The E-Class is less tautly tuned than the C-Class, but the suspension doesn’t give up its sporty credentials in tight corners, even if the chief developer Christan pushes the gas early.

The latest Air Body Control suspension, which will be optional on lower trim levels and standard on more up-market variants. It reacts faster to road imperfections than the previous Airmatic system. Nasty bumps are soaked up with impressive suppleness, and with little vertical body movement in Comfort mode. This convertible is already unusually stiff and rattle-free at the prototype stage.

In contrast to the predecessor model, the E-Class Cabriolet has a considerably modified structure and generous dimensions. The predecessor, on the other hand, was based directly on the C-Class. The C-Class now has its own separate (and smaller) convertible. From this, the new E-Class Convertible stands out so clearly that there should be no confusion. The futuristic dashboard was taken directly from the E-Class sedan. The rear section is so generously designed that long journeys can not be a problem, and the standard acoustic top provides a low noise level so you could forget you sit in a convertible when the roof is closed.

Speaking of the roof, the three-layer fully automatic structure engineered by Austrian specialist Magna folds in a familiar scissor action and stows in its own dedicated area underneath a plastic tonneau cover in 20 seconds, at speeds up to 31 mph. Most importantly for many customers, however, is another aspect: This cabriolet is simply beautiful. Experts speak of a minimalist design. This means that no superfluous bead or edge interferes with the harmonic lines. The taillights are wide and horizontal, the soft top fits seamlessly into the lines. As soon as the roof is opened, the viewer is free to look at an elegant, classy interior. The distinguishing feature from the sedan is the dedicated color and decor palette – as well as the metal-lighted air vents in the form of a turbine. The leather trim in blue and cream as well as the bright, open-pored wood inlays are not available in the E-Class.

With a drag coefficient of just 0.27, there’s very little wind buffeting within the interior, even at high speeds. This is aided by a wind deflector, which fits between the rear seats at the rear of the cabin, Mercedes’ Aircap system, which deploys from the top of the windscreen. An optional 12.3in digital instrument display and multifunction steering wheel featuring touch sensitive pads as part of the latest Comand APS NTG 5 infotainment system is also available. Mercedes-Benz claims a boot capacity of 360 litres with the roof up.

Under the bonnet of the E-Class convertible are four-cylinder and six-cylinder engines, which work according to the Otto or Diesel principle. The model program is still not defined, but it is already clear today that there will be no manual transmission, but only the nine-speed 9G-Tronic torque converter-equipped automatic gearbox. Top model E 400 4Matic will get standard four-wheel drive. 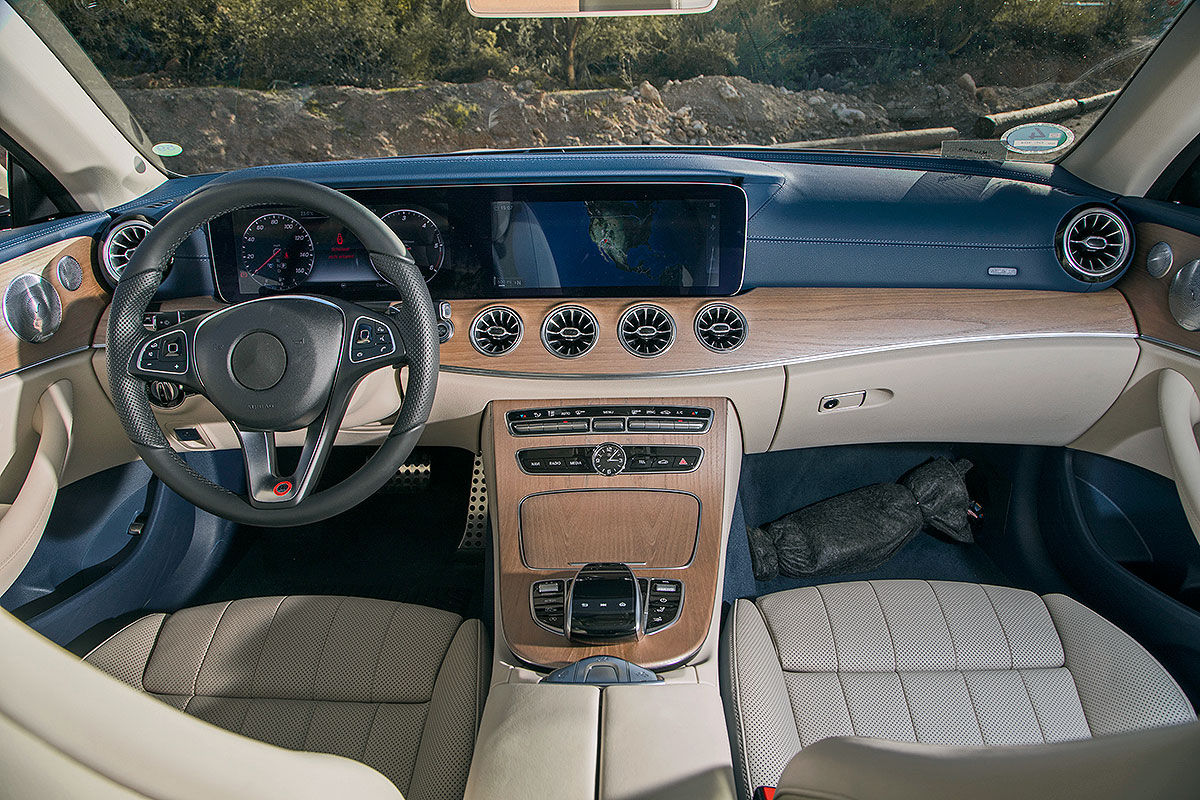