Official: Mercedes-AMG GT R Pro and AMG GT facelift are here in all their glory

At the beginning of last year, the approximately three-year-old Mercedes-AMG GT range was supplemented with a GT C variant and the German supercar also received the new grille that Mercedes calls ‘Panamericana’. Tonight Mercedes-Benz in Los Angeles has again presented a modernized version of its sportiest model.

The biggest news is that the Mercedes-AMG GT family gets a new top version: the GT R Pro, a limited edition (750 units) that is exclusively available in green or gray with racing stripes. This can be seen as the superlative of the already mighty Mercedes-AMG GT R. The Mercedes-AMG GT R Pro incorporates technology from the AMG GT3 and GT4 racers. This variant has, among other things, a modified chassis with adjustable dampers and anti-roll bars, carbon ceramic brake discs and a body that is packed with mainly functional spoiler work. In particular, the rear spoiler is striking, but if you look closely, you will notice that small tabs made of carbon fiber and other air guides have been installed in several places on the body. The front apron features carbon fiber canards that improve stability at higher speeds, while new air slots in the front fenders reduce front-axle lift.

Standard equipment includes electronically controlled dynamic engine and transmission mounts, lightweight AMG Performance five-spoke forged wheels offered exclusively in titanium grey and the new AMG coil-over suspension which allows the driver to set the spring preload length mechanically and also adjust the compression and rebound of the dampers – allows influencing the body dive and roll as the well as the traction of the AMG GT R PRO even more selectively. 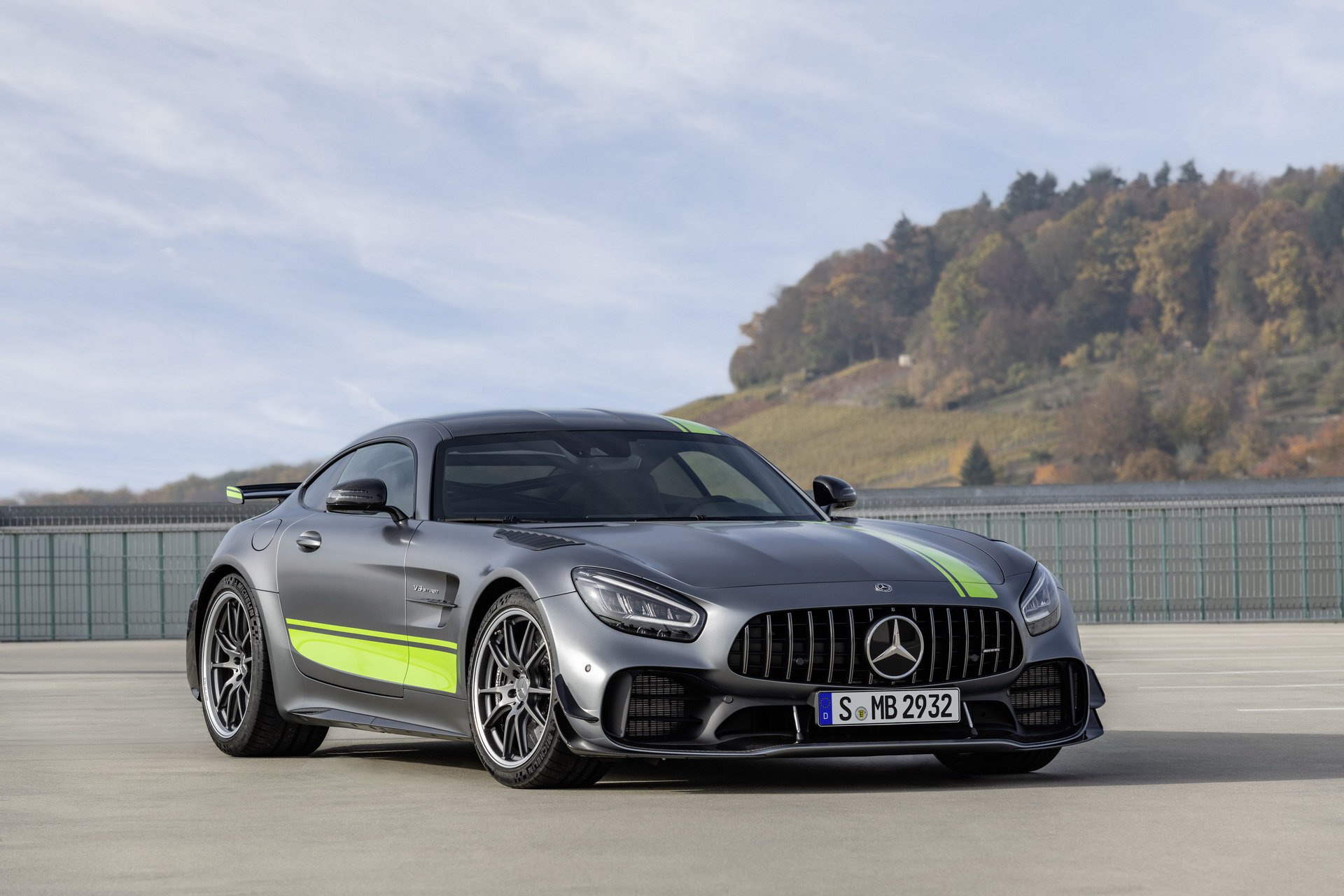 Going back to the regular variants, the renewed Mercedes-AMG GT family members are characterized at the front especially by their new headlight units whose layout shows similarities with those of the AMG GT 4-Door Coupe launched this year. The illuminated graphics of the daytime running lights are now arched through the entire headlight and also serve as position light and turn signals. The headlamps also have three individual reflectors for dipped and main beam. The light of the LED tail lights also appears even deeper set and sportier through the dark background and Mercedes-AMG also redesigned the sporty black diffuser. 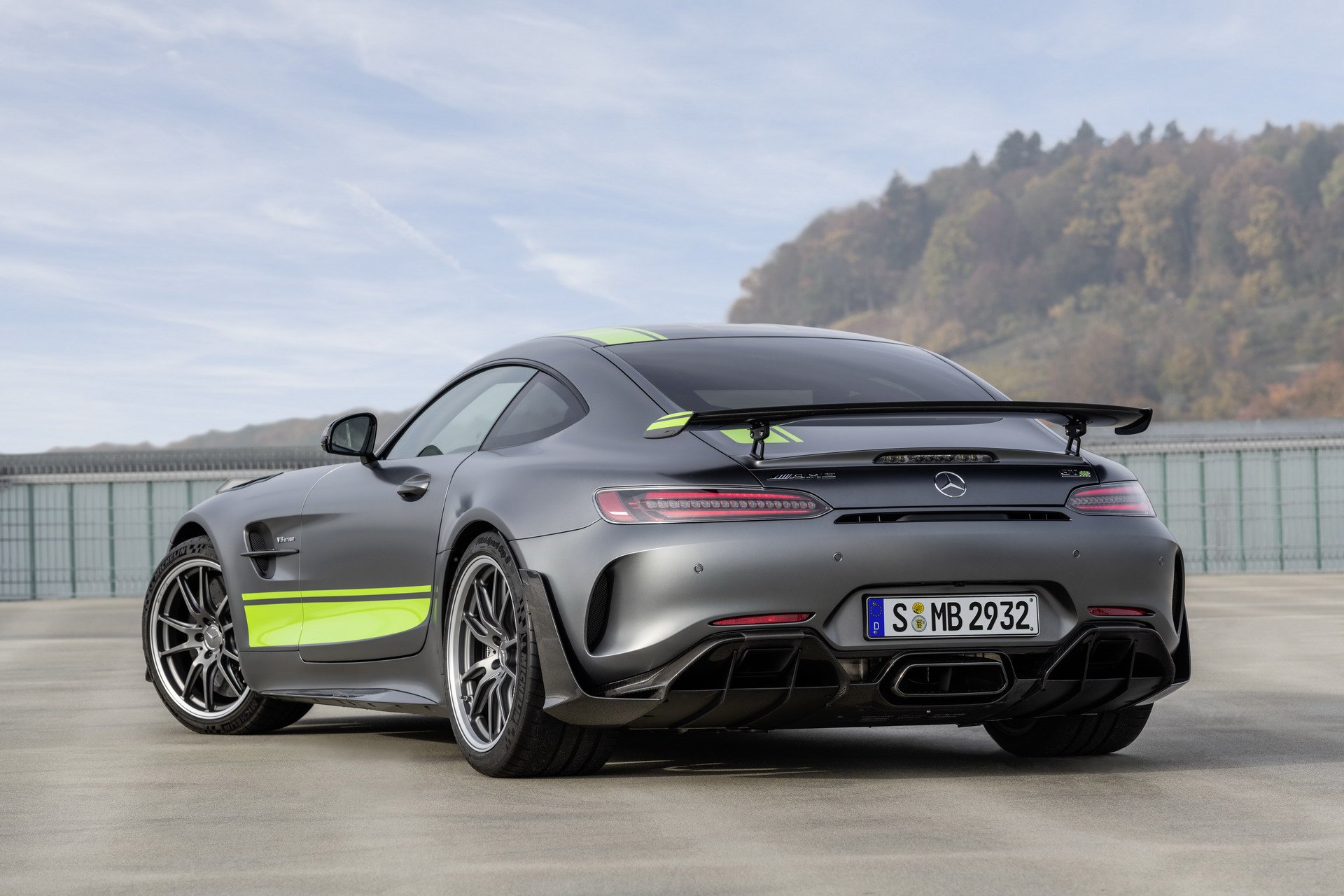 The Mercedes-AMG GT and GT C have a new black insert in the rear bumper and the exhaust tailpipes now resemble those of the aforementioned GT 4-Door Coupé. The Mercedes-AMG GT now has two round tailpipes, the GT C has trapezoidal shaped twin pipes and the R variant retains the centrally placed tip flanked by two further pipes hidden in the diffuser.

Brand new is the “AMG Dynamics” driving aid that expands the functions of ESP (four possible stages “Basic”, “Advanced”, “Pro” and “Master”) to exact dosing of power distribution at the rear axis and the characteristics of steering. With the help of sensor data, the system calculates in advance (according to speed, the steering angle or the yaw rate) how the car will react and then intervenes autonomously, optimizing the transverse dynamics to offer higher lateral acceleration, better traction, and load change reactions. The driver can choose between four steps for the driving aid. The new parking assistant “Parktronic” includes a camera for both front and rear and should make the GT better fit for everyday life. Also new is the the AMG Track Pace system (standard part of the COMAND infotainment system), a virtual race engineer for closed-off race tracks which detects and records more than 80 vehicle-specific sets of data ten times per second with one goal: better driving skills. 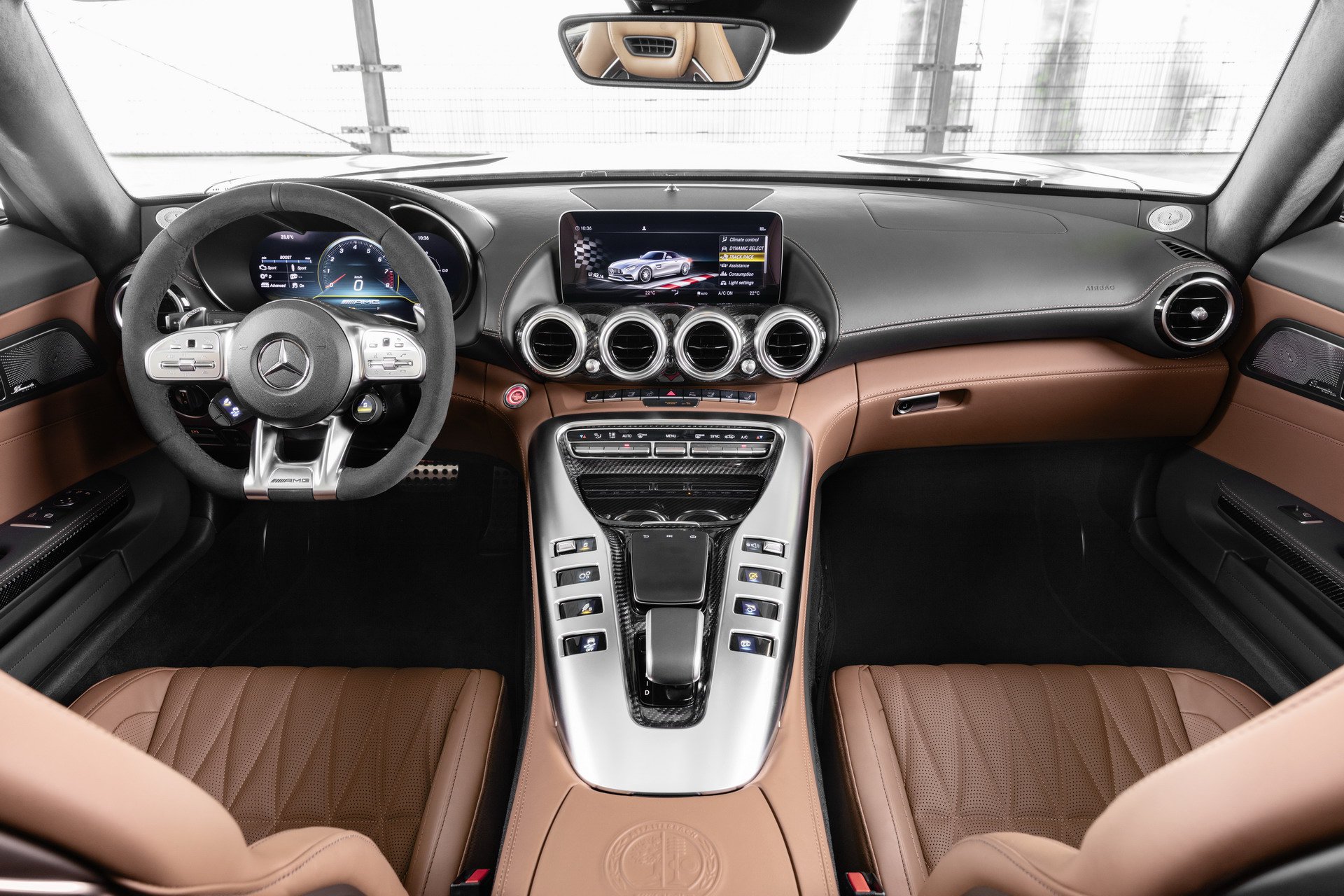 Mercedes-Benz also made significant changes in the interior. The Mercedes-AMG GT now features a new infotainment system with a 10.25 inch TFT screen mounted on the centre console and a fully digital instrument panel with a diameter of 12.3 inches (both standard – the driver can choose from three basic designs ranging from “Classic” to “Sporty” or “ Supersport”). In addition, Mercedes-AMG introduces a new flat-bottom steering wheel with galvanized paddle shifters, touch control surfaces (for functions of the digital dash and multimedia displays) and a new round controller with an integrated display with which the AMG driving modes can be set. Mercedes-Benz also renews the mid-tunnel. Here we find the new touchpad with which the infotainment is operated and new colored TFT display buttons that replace the old round push-buttons. The symbols displayed on them are self-explanatory and can be used to fine-tune the chassis, exhaust, rear spoiler for example, or to switch off the ESP. The driving programs and the volume are adjusted via two classic rocker switches.