Mercedes-Benz has pulled the wraps off the stunning EQ Silver Arrow Concept at the Concours d’Elegance of Pebble Beach.

The remarkably designed Mercedes-Benz EQ Silver Arrow is especially a car meant to attract attention during Pebble Beach, but according to Chief Design Officer Gorden Wagener the concept also give a taste of future designs of the brand. See the concept car as a vision that shows an extreme version of the EQ design language.

A few weeks ago, Mercedes-Benz announced through a teaser that this year it also brings a show car to the Concours d’Elegance of Pebble Beach. Last year it was the impressive Vision Mercedes-Maybach 6 Cabriolet that stood out in the Californian sunshine and this year it’s the turn of the Mercedes-Benz EQ Silver Arrow to create a stirr. 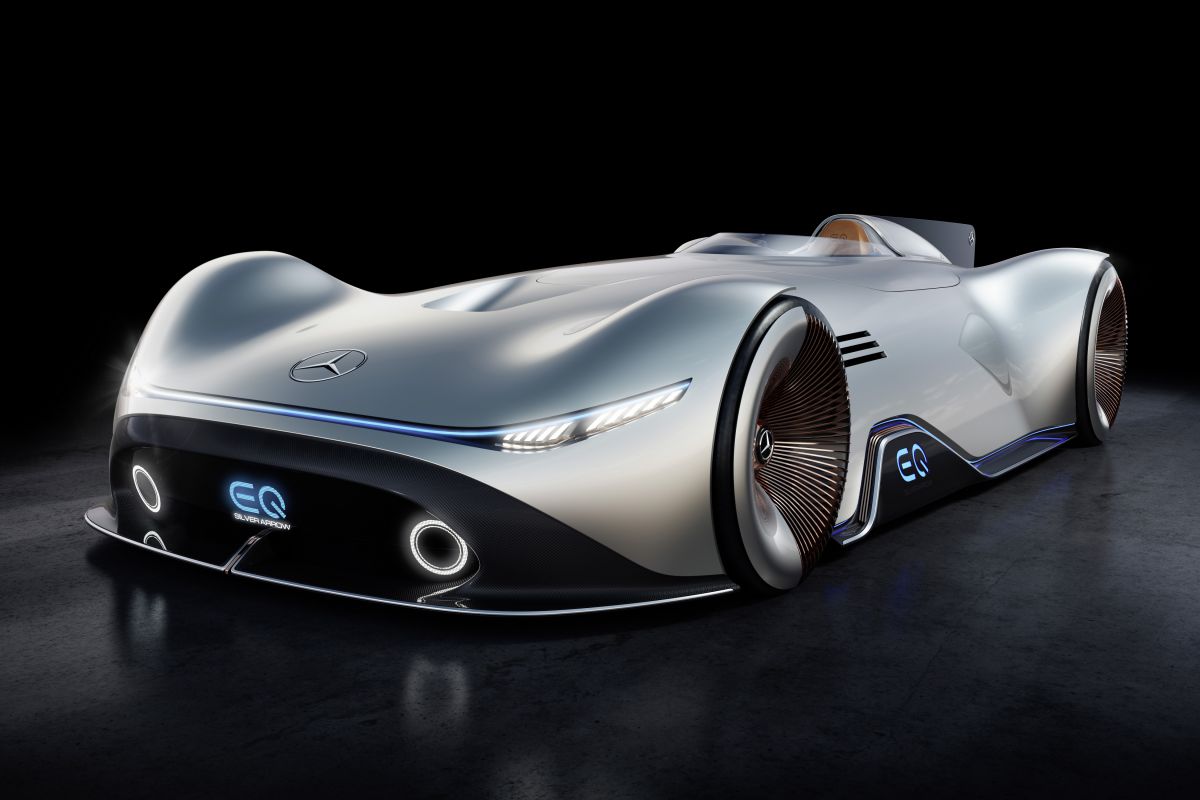 The initial trailer video presented by Mercedes-Benz was accompanied by the hashtags #eqsilverarrow and #SwitchToEQ. It should come as no surprise that the EQ Silver Arrow has an electric powertrain and also pays homage to the W125 from 1937, one of the silver colored F1 racers that was referred to as ‘Silberpfeil’. Fun fact: to save weight, those cars were not painted at the time. The bodywork of the 5.3 meter long and about 1 meter wide Mercedes-Benz EQ Silver Arrow is covered with a layer of unique paint called alubeam Silver. Just like the historic racers, the car is a single seater that only offers space to the driver.

The ‘silver arrow’ has a 750 hp electric motor on board, while the battery pack with a capacity of 80 kWh is concealed in the foor. Mercedes-Benz promises a range of more than 400 kilometers according to the WLTP cycle. 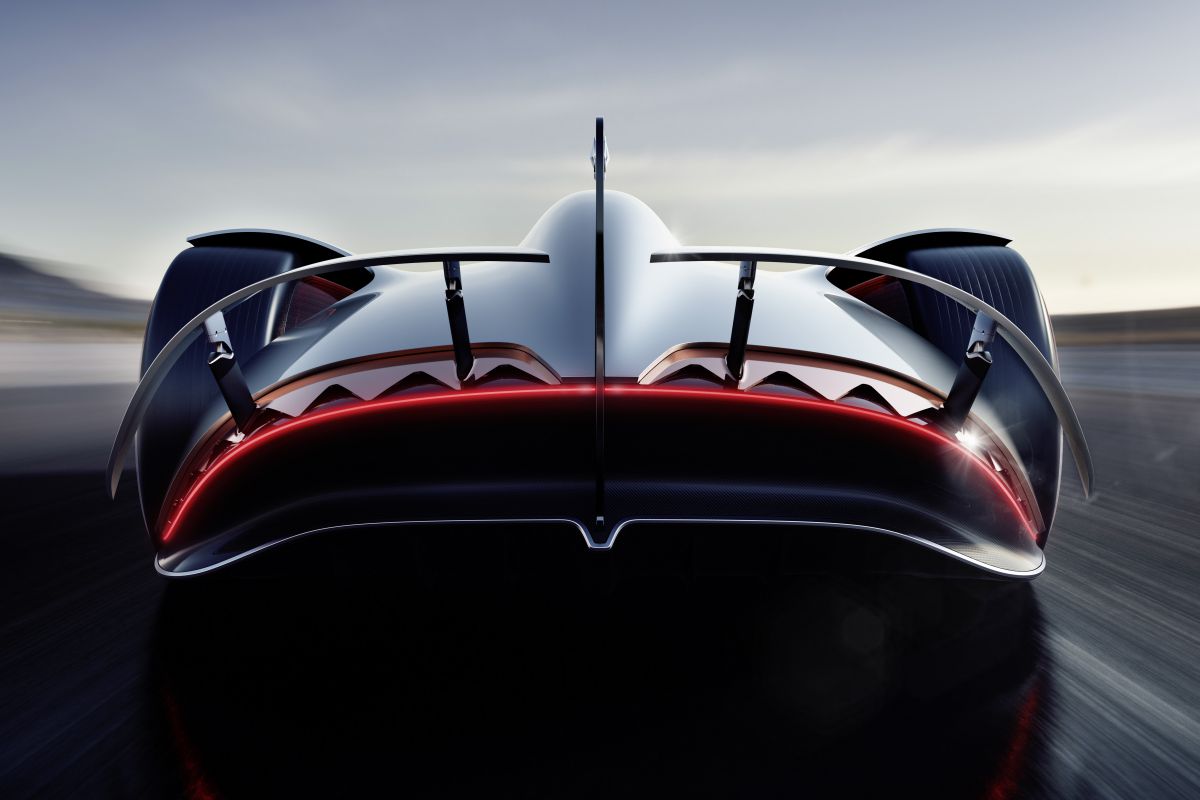 Various things, think of the splitter at the front, are made of carbon fiber. The grille gives the impression of being a display and at the front we also find a wide blue light bar. We find more remarkable design cues in the form of a forward-fold cover of the driver’s compartment, semi-freestanding wheels, stationary hub caps at all times and the remarkably designed 168-spoke wheels that have been sprayed with pink gold. The wheels measure 24 inch at the front and 26 inches at the rear. A star pattern is provided in the tire tread. At the rear two extendable spoilers are placed, spoilers that also function as an air brake. 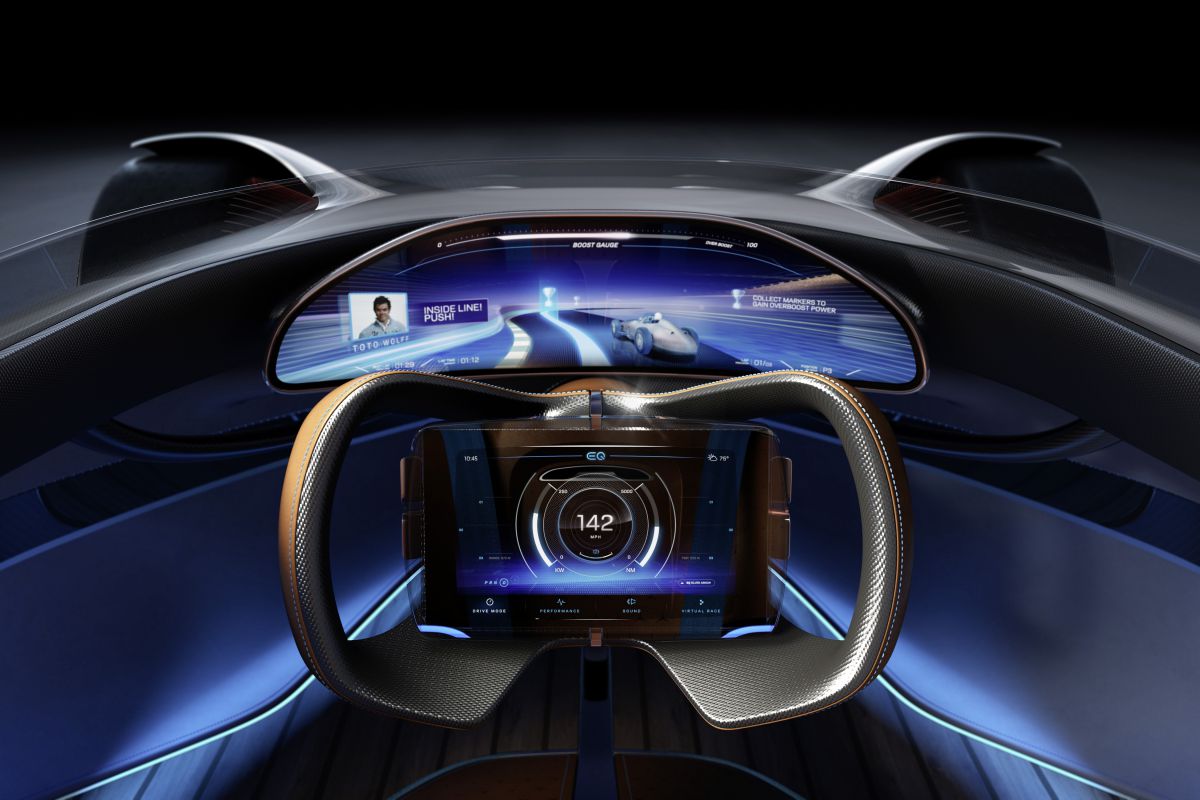 Naturally, the necessary energy has also been put into the design of the interior, where Mercedes-Benz applies leather, brushed aluminum and walnut wood. The dashboard further consists of a large curved panorama screen and a touchscreen is integrated in the steering wheel. The display can help the driver on circuits to drive faster and hit faster laps. 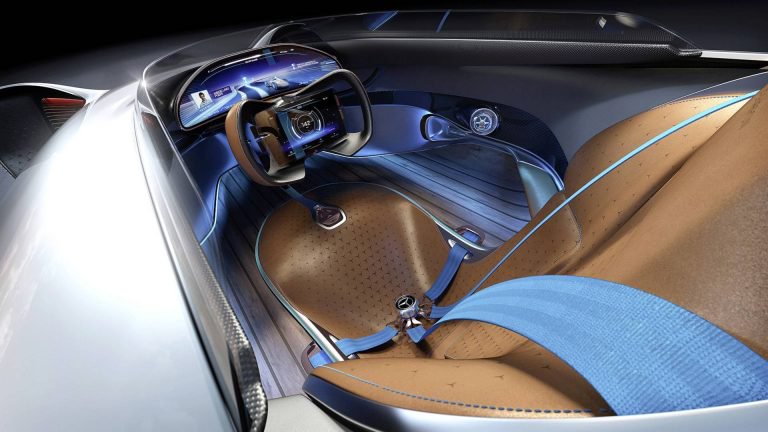 The screen not only displays advice, but also shows a ‘ghost’ of the opponent. The display in the heart of the steering wheel can be used to select various driving modes. Also, the sound that makes the car is configurable. Both the sound of an F1 car and that of a Mercedes-AMG with V8 are available.

Mercedes’ famous Airscarf that prevents a cold neck is also incorporated in the chair. Furthermore, not only the steering wheel and seat, but also the pedals adjust with the help of a button placed on the driver’s seat.