Not his usual ride: Lewis Hamilton gets the Mercedes-Maybach

Lewis Hamilton got a consolation prize for his disappointing result in Singapore. The 2-time world champion has just received a Mercedes-Maybach S600. Not what we would expect from the man who plays around the racetrack with one of the world’s fastest car though…

The Mercedes-Maybach is not Lewis Hamilton’s typical ride and it is miles away from his Formula One Mercedes AMG Petronas hybrid racing car. But nobody says no to the Maybach. Right before getting on the plane to fly to Asia for the Japanese Grand Prix, Hamilton showed off his expensive new set of wheels. By the way he smiles, he seems to have fully recovered after he had to retire due to technical issues and poor choice of tyres in Singapore. “My new whip!”, he captioned on Instagram. He forgot to mention though, if he is going to be chauffeured around or if he will be driving the bright white with chromed wheels Maybach himself.

Just two weeks ago, Lewis Hamilton was posing with a G 63 AMG 6×6, asking fans if he should get one or not. It was obviously not, as the world champ decided to go for the exclusive limousine. 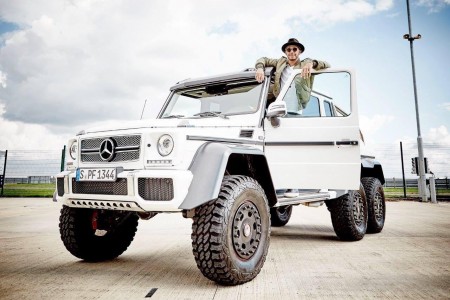 The Stuttgart grand brand claims the Mercedes-Maybach S-Class S600 is the world’s quietest production saloon. The sound of the twin turbo V12 engine developing 523 HP and 830 Nm of torque gets through to the precious occupants.