No rise of the machines yet! Mercedes-Benz fires robots and hires humans

It takes humans to build robots, but robots are not enough to build the cars of the future. Mercedes-Benz is bringing back the humans to the assembly line, after realizing that robots can’t handle such sophisticated machine.

So it seems that robots are not better than humans. They are not smart enough to put together the exlcusive Mercedes-Benz S-Class, that comes with a growing range of features and options like carbon fiber trim, heated and cooled cup-holders and even four different types of caps for the tyre valves. The robots seem unable to keep up with that.

Thanks to their dexterity and flexibility, surpassing that of the robots, the humans get reclaim their posts along the assembly line and the plant managers are expecting them to outperform the machines.

„Robots can’t deal with the degree of individualisation and the many variants that we have today,” Markus Schaefer, the German automaker’s head of production, said at the factory in Sindelfingen. ”We’re saving money and safeguarding our future by employing more people.” Even though robots do not request a salary, they have high maintenance costs and they need constant updating. 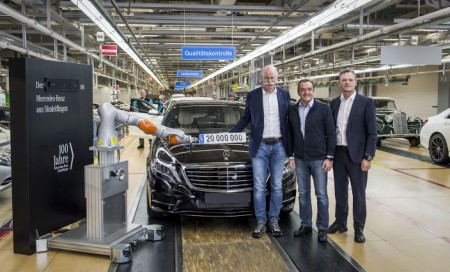 The 101-year old Sindelfingen plant is the place where super cars like the GT and ultra-luxury like the Mercedes-Maybach get to see the light of day. The facility processes 1,500 tons of steel per day and rolls out more than 400,000 vehicles per year.

“With manufacturing focused around a skilled crew of workers, Mercedes can shift a production line in a weekend instead of the weeks needed in the past to re-programme robots and shift assembly patterns”, Schaefer said.

With 30 more models set to hit the showrooms in the upcoming decade, robots won’t completely disappear in Sindelfingen. They will be lightweight machines, more flexible and reliable, and will work under the command of humans, not the other way around.