Elena Luchian, September 28, 2015
2.57K 0
Home Lifestyle No light at the end of the tunnel for two Mercedes-Benz drivers

Incapability met egotism in UK, as two Mercedes-Benz drivers bumped into each other right in the middle of a narrow tunnel, in which there was no way they could pass by each other. 40 minutes into the conflict, dozens of cars were lined up outside the tunnel waiting for a decision.

The female driver of the Mercedes convertible was the one to put up with all the harsh allegations. “There are men here trying to get their kids from school, so just back off, you are shaming yourself!”, screamed in a soprano voice, the man who was supposed to keep all under control.

The woman in a convertible Mercedes had entered the tunnel heading north towards Maidenhead. A sign at the side of the road stated that she had right of way. Meanwhile, an elderly man, also driving a Mercedes, was passing through the tunnel, heading south towards Bray. 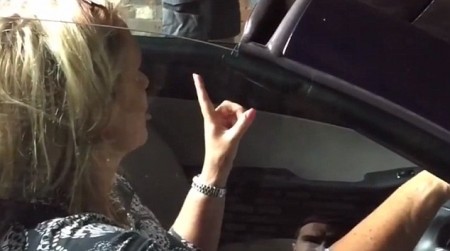 The elderly driver was a long way through the tunnel when he bumped into the navy blue convertible. But in narrow tunnels like this one in UK and most of the ones on the Amalfi Coast in Italy (the Italian drivers know exactly what I mean), it is not a matter of who gets there first or of common road courtesy. Both ends of the tunnels are guarded by road traffic controllers and sometimes there are even traffic lights that signal the drivers when they can drive through or when they need to stop. 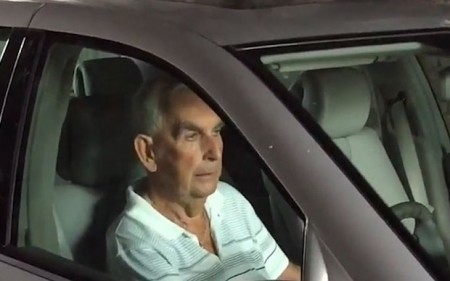 The recalcitrant woman did not panic, although she heard tones of insults coming her way. She just sat there waiting for the other driver to reverse his vehicle.

“My teenage daughter and her friend are walking home, if anything happens to them it will be your fault”, an angry exasperate woman shouted at her. 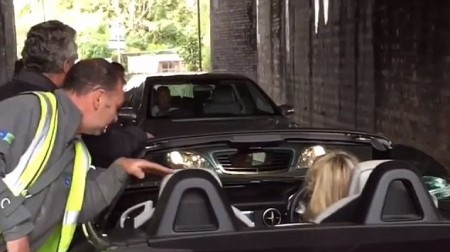 We will not take sides in this and will definitely not gonna pull out that feminist card. But we can but laugh when the old gentleman decides to give in and reverse. But he’d better not do that. He is inches away from crashing his silver limousine into the wall of the tunnel, as he had no idea how to reverse. So that was one of the reasons the argument went on and on. Does he still have his license?

Check out the mental fight in the following video: