Mercedes Formula 1 driver, Nico Rosberg posted a photo today on his social media accounts announcing that he and his wife Vivian are expecting their first child in August.

The 29-year old German Nico Rosberg who married his childhood sweetheart last year wrote on his twitter account “Exciting time for our little family! Vivian is pregnant and if all goes well we will get a little baby girl in August!” 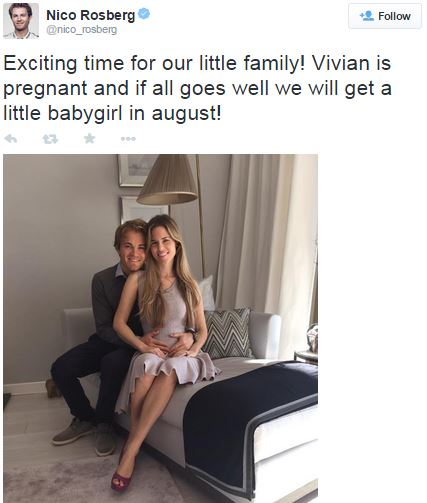 Nico Rosberg and Vivian Sibold got married last July in Monaco and he announced the good news on the second day of testing in Barcelona. The Mercedes F1 driver will join the growing list of young fathers including Felipe Massa, Sebastian Vettel, Kimi Raikkonen, Romain Grosjean and Pastor Maldonado.

He was congratulated immediately by the Mercedes Formula 1 team on the official Twitter account – “We wondered who ordered the entire stock of these…huge congrats to Mr. and Mrs. @nico_rosberg! Fantastic news! #F1” and “Best get the guys working on another seat for the 3rd generation of racing Rosberg hadn’t we?”

Furthermore, he received messages from his rivals as well. Romain Grosjean welcomed Nico Rosberg in the parents club, while Williams Racing wondered if the little one will join the family business.

Mercedes posted on the Twitter account on Friday morning that Nico Rosberg will be at the “wheel today, as scheduled” at the Circuit de Catalunya, despite suffering from a trapped nerve in his neck.