Nick Matthew – If the Steering Wheel was a Racket

Nick Matthew may be one of the best squash players in the world, but he is a terrible driver! Wait a minute, we’re not offending him or anything. He says so himself, in his autobiography “Sweating Blood”. God save the Queen, but the British sportsman recently got a Mercedes-Benz A-Class from a dealership in Derbyshire, England.

If the steering wheel was a squash racket, everything would be so easy for the former world number one, Nick Matthew. In his autobiography, the three-time world champion amusingly tells the tale of his first driving experiences behind the wheel of a turquoise Mercedes-Benz B-Class.

One night, he offered some girls a lift home, somewhere in Sheffield. But reaching their house, on top of a hill, he realized there was no way he could turn the car in such a narrow space. So he went backwards, downhill, hitting just about any side mirror of the parked cars, on the way down. “No doubt a few residents peered out of their front windows to find out what all the commotion was about. There I was in my turquoise car with my name written large down the side, driving backwards with all the finesse of an Egyptian taxi driver”, he remembers. 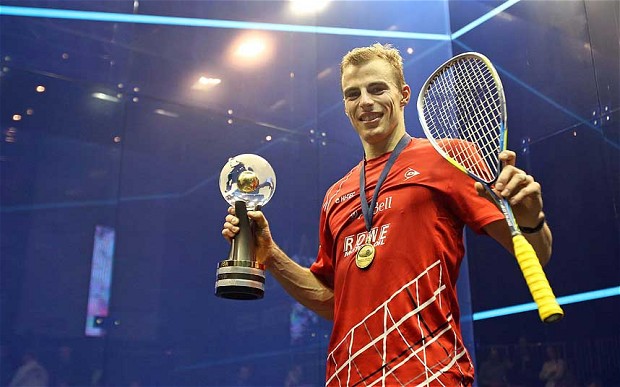 Two days later, a policeman knocked on his door. One of the residents had made a complaint for a 700 pounds damage to her parked car. He told the policeman he only scraped the side mirrors, not the bodywork.

Well, he “only” had five attempt to get his driving licence and lost it soon after that, for overspeeding. So other two exams followed for him to take it back.

Nick Matthew’s second Mercedes was a silver C-Class and he recently got a A-Class. All with his name written on them. “I couldn’t drive badly or resort to road rage because everyone would instantly know who the idiot behind the wheel was.”

“Luckily for other road-users, my driving skills have improved in the recent years.”, the three-time world champion humbly says.