The new Audi R8 has been caught in production guise, less than a month before its official debut at the Geneva motor show. It retains its predecessor’s proportions, mid-engine layout and V8/V10 engines.

Design-wise, the second-generation R8 is still easily recognizable as an Audi in supercar clothes. The front end is only modestly reshaped, the more aggressive bumper and all-new grille/air intakes combo being the most obvious differences compared to the current model. A closer inspection reveals new flanks which appear to feature more sculpted panels, as well. 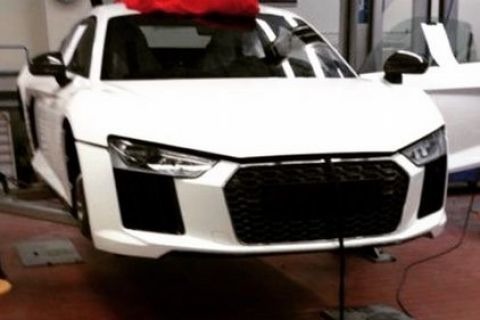 At the heart of the all-new R8 will be reworked versions of the current V8 and V10 engines. Cylinder deactivation and stop-start technology will bring a 10% fuel economy improvement. Power will jump to over 450 HP and 570 HP respectively, corresponding to a hike of at least 25 HP for both versions.

The new R8 V8 is expected to arrive in Audi showrooms early next year, costing from just over 100,000 euros.