Next-gen MBUX user interface was presented at the 2018 CES

Mercedes-Benz is preparing a next-generation user interface system for 2018, a system that provides drivers and passengers with new levels of interaction via voice, touch and conventional controls. The luxury car maker has presented the system in Las Vegas, at the 2018 Consumer Electronics Show.

The Mercedes-Benz User Experience (MBUX) shall premiere with the launch of the future A-Class, that is set to see the light of day this spring. The system integrates two large configurable screens, one playing the part of the instrument cluster and the other one being the main infotainment center. Both accept conventional and touch controls, operating like a smartphone. A touchpad will replace the COMAND rotary controller.

A simple complaint such as “Hey, Mercedes. I am cold” will be enough for the system to activate the climate control. A simple question such as “Do I need sunglasses tomorrow in Miami?” activates the display of the weather forecast.

The voice control is able to learn, as now it can understand non-native speakers better. The system will be capable of providing answers and build up dialogues, dropping the stereotypical answers. 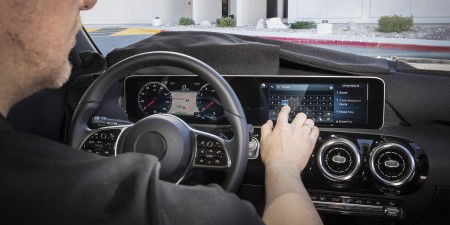 MBUX is also based on artificial intelligent, which can adapt the system to the habits of the users. If the user has the habit of calling his mother on a daily basis, at the usual time, he will receive the suggestion to make the call. The navigation system learns the route frequently driven and also suggests it, updating it with real-time traffic information, a feature that turns the car into a personal assistant for the driver.

The Mercedes me app is also keen on getting the car’s occupants in time to their destination, reminding them to leave on time, considering traffic conditions.

The MBUX system can also be accessed via smartwatch, a demonstration performed at the 2018 CES, where Mercedes used the Android Wear 2.0 operating system. For the very forgetful ones, the Parked Vehicle Locator will indicate the car’s location within a radius of 1.5 kilometers. All these features can also be operated on iOS.