The new Mercedes-Benz GLS proudly stands as the company’s biggest and most luxurious SUV, more than ever before. For the first time, the SUV is optionally available with two luxury individual seats in the second row. The Mercedes portofolio counts seven high-ride vehicles.

The Mercedes-Benz GLS grew in size in all directions. It gains 77 mm in length up to 5207 mm, 22 mm in width up to 1956 mm and its wheelbase has been extended by 60 mm up to 3135 mm, which translates into more generous interior space.  Despite the larger proportions, the car features a Cd value of only 0.32. 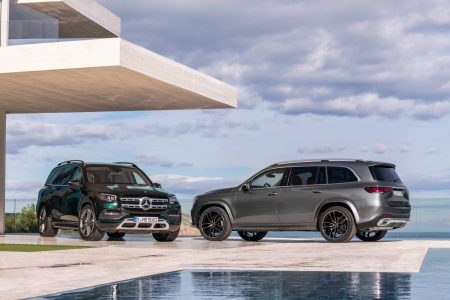 An upright radiator grille flanked by the MULTIBEAM LED headlamps with a total of 112 LEDs er headlamp, creates a striking stance. At the opposite end, 3D-looking taillights emphasize the vehicle’s robustness.

There are three fully electrically adjustable seat rows onboard fitted as standard, with the third row featuring complete lowering in the floor to increase boot space up to 2,400 liters. It is also possible to fold down all the seats simultaneously by pressing the “ALL” button. The sill lowers by 50 mm at another button push. 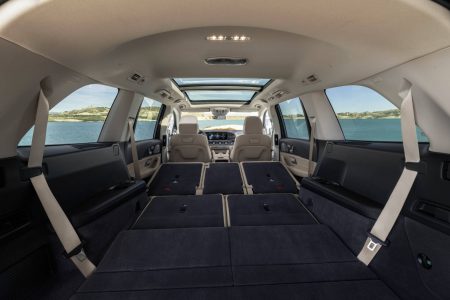 The Easy-Entry function allows facile access to the rear seating area. The future owner may choose a three-seater rear bench or two luxury individual seats with armrests for the second row. Mercedes claims that two people of up to 1.94 m tall may travel comfortably in the third row, which also feature seat heating.

Equipped with the E-ACTIVE BODY CONTROL suspension based on a 48-Volt system, that made its debut with the GLE, the GLS boasts the abilities of a typical off-roader. The air suspension comes as standard, with with Adaptive Damping System Plus. The E-ACTIVE BODY CONTROL operates to pull the GLS out when stuck in a rough situation, automatically lowering and rising to change the tyre pression on the ground and improve traction. 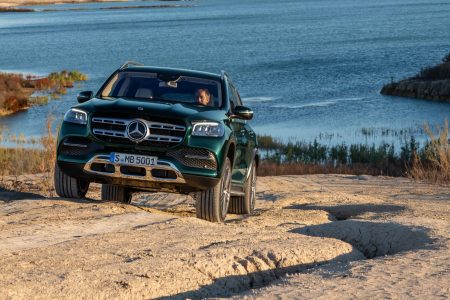 A premiere for the range is the Carwash function, that readies the car for entering a carwash at the press of a button. Thus the mirrors are folded, all windows and the sunroof are closed, deactivates the rain sensor and activates the 360-degree camera to offer support to the driver when driving into the carwash.

The cabin of the GLS receives the artificial intelligence-based MBUX system with the two 12.3-inch screens. The system is also available for the rear seats, with two 11.6-inch touchscreens that are able to show movies, to play music, to offer internet connection and further entertainment, as part of the MBUX Rear Seat Entertainment System. A Rear Comfort package Plus brings separate tablet for controlling various functions of the MBUX from the rear.

The full-color Head-up Display can be optionally ordered. 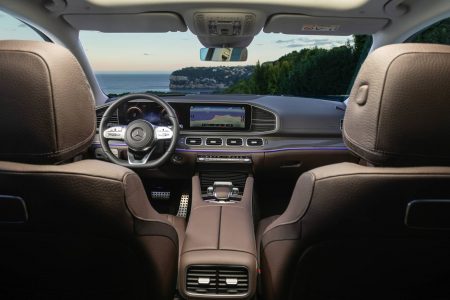 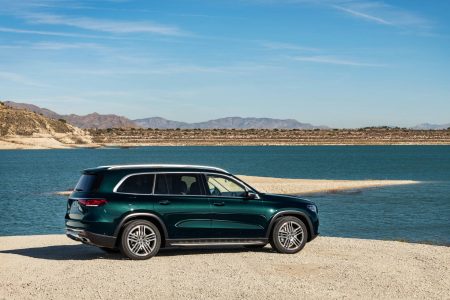 Just like its luxury siblings, the new Mercedes-Benz GLS comes equipped with the Active Distance Assist DISTRONIC, with Active Stop-and-Go Assist. Like the new GLE and the GLC, it is also fitted with the Trailer Manoeuvering Assist, as an option available in Europe.

Manufactured at the Tuscaloosa plant in Alabama, USA, the new Mercedes-Benz GLS will hit the showrooms by the end of the year.