The introduction in China completes its global launch of the highly versatile new Vito. Its adaptability makes it ideal for China’s rapidly growing small- and medium-sized enterprises. It is the only vehicle in its segment offering AGILITY CONTROL suspension with frequency-selective damping. Therefore the new Vito balances comfort with agility, adapting to both road conditions and driving situations.

Now completely redesigned, the new Vito’s cockpit is exemplary in terms of functionality and ergonomics. Symmetrical in its fundamental form, the structure is clear and uncluttered for maximum operational safety. All controls are within easy reach of the driver. A great deal of attention has been paid to detail in the cockpit, which has an exceptionally high-quality look for this vehicle class.

It is the first vehicle in the Mercedes-Benz portfolio to be available with a choice of rear-wheel, all-wheel and now front-wheel drive. Another first for the vehicles bearing the star is the associated use in one and the same body of engines installed lengthwise for rear-wheel and all-wheel drive systems, as well as the transverse-mounted engines for front-wheel drive.

Small, but mighty: the compact four-cylinder OM 622 turbodiesel unit, with a displacement of 1.6 litre, is a case study in systematic downsizing for low fuel consumption. Long maintenance intervals of max. 40,000 km or two years reduce costs and attest to the engine’s robustness. The engine meets the requirements of the Euro 5b+ emissions standard, as they currently stand. It is already ready for the future Euro 6 emissions standard. The exceptionally powerful Mercedes-Benz OM 651 engine is the right choice for rear-wheel and all-wheel drive versions. The new Vito comes with a six-speed manual transmission. The optional 7G-TRONIC PLUS automatic transmission with a torque converter is likewise designed for maximum fuel economy. 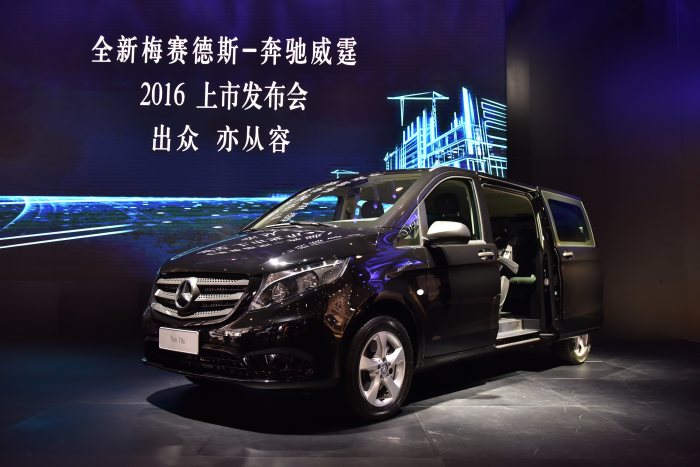 Local production in Fuzhou, China, started in August. Fujian Benz Automotive invested around 200 million euros in China (1.4 billion RMB) for the production of the new mid-size models Vito and V-Class. In addition to increasing the localization of components and features for these new models, the investment improved the preparation and modernization of the body shell and assembly, as well as providing for the qualification of staff in the company’s Fuzhou plant.