That’s how it is for the newcomers. They first have to prove they are good, before everyone trusting them. So now the Porsche 911 Carrera 4 GTS is putting the Mercedes sports car, the AMG GT S, to the test.

When the Mercedes-AMG GT S came out in the fall of 2014, the Porsche fans said: Well, that looks so much like a Porsche. Ok, the Mercedes fans can live with that. But how about a face to face race to prove which one is better? So this is it:

The team in Motorsport Magazine was the one to put the Mercedes-AMG GT S one on one with the Porsche 911. 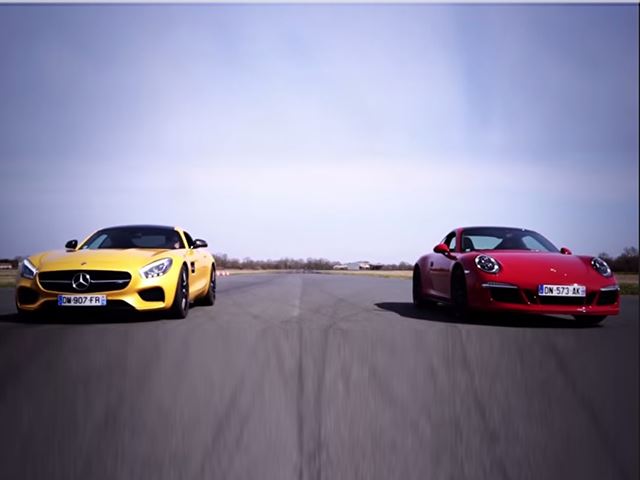 The red candy Porsche begins well along the 400 meter racetrack and takes the lead. We can’t possibly speak about a weight advantage, since it is only 80 kilograms lighter than the Merc. But that is only before the Mercedes 650 Nm torque kicks in (only 440 Nm for the Porsche). Therefore, the first to cross the finish line was the solar GT S.

After chasing the Aston Martin Vantage, the Lexus RC F and the Porsche 911 Carrera away, one question still stands for the Mercedes-AMG GT S: who’s next for a drag race? Not that we’re bothered, but maybe the yellow guy should pick someone of its own size and potential.

Check out a brilliant comparison of the two fireballs, the Mercedes-AMG GT S vs Porsche 911 Carrera.