Mr. Bean sells one more Benz. It is yet again a Mercedes-Benz 500 E W124, manufactured in 1993, that has been in his possession for the past five years. The car is going under hammer.

Rowan Atkinson, famously known as the character of Mr. Bean, sold his silver 500 E W124 in the fall of 2019. He’s now coming with a brand-new offer. This time is a Nautic Blue sedan with almost identical specifications. “To me, this color scheme is by far the most attractive”, the actor says.

The sedan that saw the light of day in the Porsche factory is in a very good condition, marking a score of 108 out of a 135, something most cars can only dream of. The original has been changed though throughout the years. The wood trim was refurbished and the seats received a new upholstery. 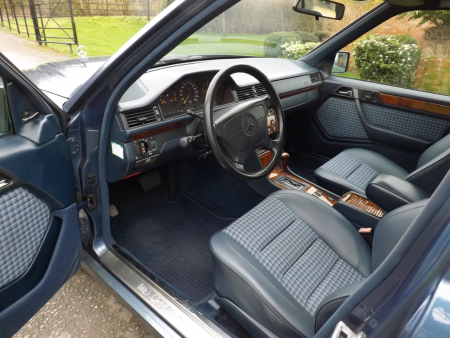 The model is equipped with driver and front passenger side airbag, something that was quite uncommon for the cars in Europe at that time. It features manual air conditioning, front power windows, front power seats with memory function, cruise control and a power side mirror on the left side, the latter being quite a new thing at that time as well.

The organizers of the auction still keep the price under wraps, but Classic Car Auctions could fetch an amount between 18 and 22,000 pounds for it. The auction is scheduled for this coming Saturday.