Family MPVs, a slowly dying breed that seems to be still alive only thanks to premium carmakers. Mercedes, the inventor of this segment in the luxury arena, has just launched its third generation B-Class, while its main competitor, the BMW 2 Series Active Tourer, has recently been updated. FIRST COMPARISON TEST via auto-motor-und-sport.de.

The all-new Mercedes B-Class is again based on the same technical platform as the A-Class, offering a ten centimeters higher seating position and better practicality. But this doesn’t mean it is simply an A-Class derivative anymore. Mercedes now says the B-Class has an independent character, being billed as the more comfortable, GT-like alternative to the A-Class. 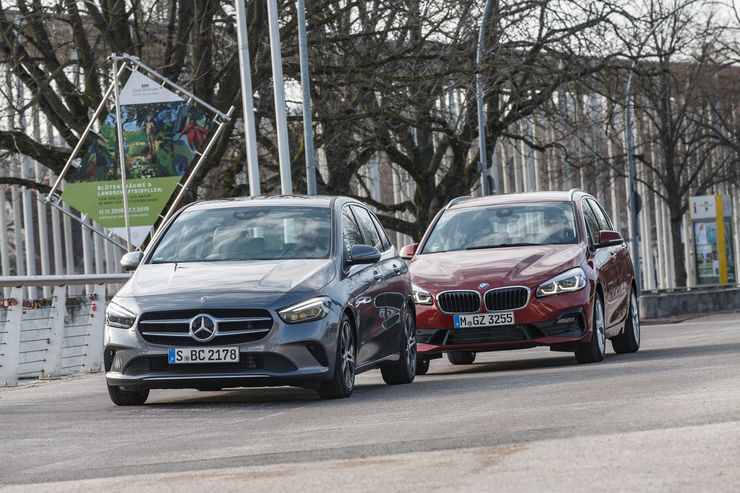 The success formula is, of course, retained, including the extremely generous luggage capacity whose volume varies between 445 and 1,530 liters. Another major practical detail is the presence of the folding passenger seat back and the three-section folding rear seats which also slide 14 cm back and forth for larger foot or trunk space.

In the BMW the rear seats can slide for 13 cm and the 390 euros remote unlocking option allow the reclining rear seat backs to fold at the press of a button – an initial variability advantage. Otherwise, both models play almost identical comfort tunes with easy access (thanks to wide opening doors) and the ergonomically sound seats and controls. Rear passengers sit higher than the ones in front with the Mercedes sofa-like approach the winner. 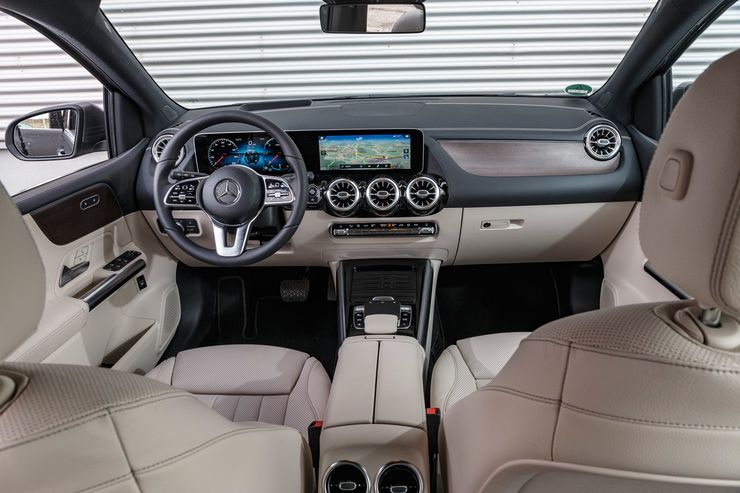 Quality is also high, but even higher in the Mercedes, as evidenced by the metal-clad door handles, lush upholstered seats and huge storage space in the center armrest (thanks to steering column mounted gear selector). BMW prefers a more restrained solidity.

The Mercedes also scores a big victory in the youth allure arena with its state-of-the-art infotainment system and dual-screen dashboard layout (two 10.25-inch TFTs optional). The all-new MBUX system can be controlled via the center touchscreen, via the center touchpad between the seats or the touch-sensitive buttons on the steering wheel. The left one allows you to configure the digital instruments and the right one the menus on the touchscreen. Voice control is also present and even an artificial intelligence assistant (like Siri) that responds to the “Hey Mercedes” command. 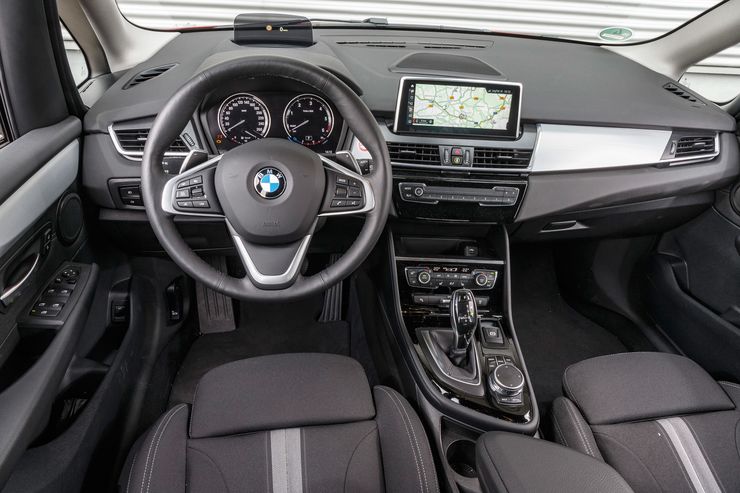 The abundance of control options does make the operation any easier, though, as the MBUX menus are rather thick. That said, some functions are really neat: the navigation system plays the view of the front camera on the display and displays directional arrows to facilitate route guidance.

BMW is the more traditional car here. Old fashion pointers still indicate speed and revs with only the head-up display bringing a touch of modernity – though we are talking about a pseudo HUD, extending plexiglas unit. Despite the sheer amount of features which make it more nested than before, the iDrive remains the benchmark of logic with an easier to use structure and a normal rotary controller. Normal switches for assistance systems are also good, offering quicker and more direct access.

On the engine front, both cars are powered by 2.0-liter Euro 6d clean diesel units. The B-Class’ latest OM 654q engine has been modified for transverse mounting and is coupled to a newly developed eight-speed dual-clutch transmission (smaller gasoline engines get the older seven-speed unit), trimmed for efficiency and long distances: it weights 3.6 kg less than the seven-speed gearbox, shifts faster and can cope with as much as 520 Nm of torque. The single turbo diesel develops 150 hp and 320 Nm (from 1,400 rpm) and works in a relaxed manner with the dual-clutch transmission, embracing the comfortable overall attitude of the B 200 d.

Road and wind noise are extremely low, thanks to the 0.24 Cd aerodynamic coefficient and the more elaborate insulation of the cabin. The adaptive suspension is supple and hides bumps well even in the sports mode. The steering does not offer much feedback, but the B-Class is a safe, finely balanced car, which remains neutral, but not particularly sporty in fast bends. Body roll is higher than in the BMW, but that was expected. 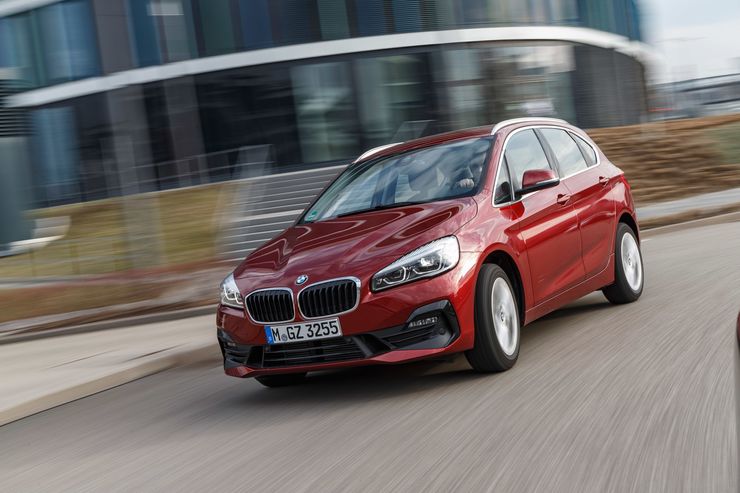 The BMW takes a more direct approach. Its steering responds with sharp precision, as you would expect from BMW, it is more stable and more agile thanks to the tighter suspension, which, is also comfortable enough even in Sport mode due to its variable damping. On long journeys, however, the harsh agility-trimmed set-up can become slightly tiresome. Despite almost the same noise readings, the wind makes itself heard subjectively louder in the 2 Series Active Tourer.

The engine in the BMW 218d is also more vocal, but a lot more spirited too, than the Mercedes’ diesel. It is also a 2.0-liter Euro 6d temp turbo, matted to an eight-speed Aisin automatic transmission with a classic torque converter. The gearbox shifts smoothly and reacts spontaneously to driver inputs, but does not bring any economy advantages compared to the B 200 d which finished the test with 10% lower consumption. 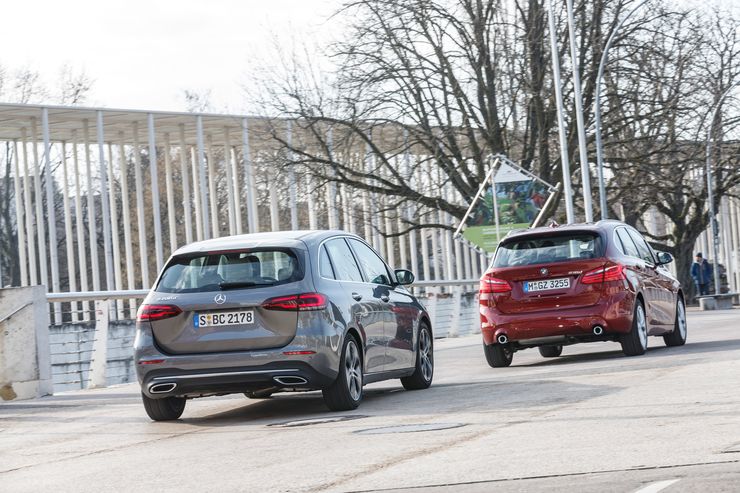 Conclusion
More practical than ever, the Mercedes B-Class wins thanks to its flattering comfort, high safety, efficient drive and modern gadgets with only one complaint: the complicated infotainment system. Very agile and practical enough, the BMW 2 Series Active Tourer unfortunately slightly neglects comfort. In the case of assistance systems, on the other hand, the Bavarian MPV is now really far behind.