The wait is a killer in any circumstance and especially when you count down the days until you get to meet your motorsport idols again. It stands for Formula 1, WRC, Moto GP, and it is just as exciting when it comest to DTM, the Deutsche Tourenwagen Masters – the most beautiful and spectacular competition of the kind in the whole world. The Hockenheim racetrack was the starting venue of the 2015 adventure.

And the wait that we have been speaking of is even more complicated when you know you will bump into a new format, new regulations and various changes at the pits of the three big competitors: Audi, BMW and Mercedes-Benz. If the racing cars stayed the same as in 2014, there has been an emulation among the people behind the wheel. The drivers’s grid and the competition numbers are: 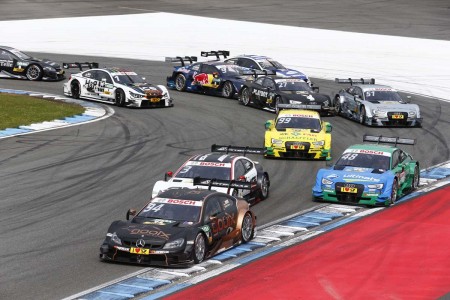 The championship has a 9-racing weekends layout, just that the big change is that we will be having to races per event. The first one, on Saturday, will be run according to the 40-minute principle, plus one more lap, while the one on Sunday will be 60 minutes long, plus one lap. Altogeher, 18 rounds will be run, so the show and the battle at the top will be even more exhilarating. After the two races run in Hockenheim, in the April, the 30th – May, the 3rd interval, the lurid weekends in DTM will take place in: 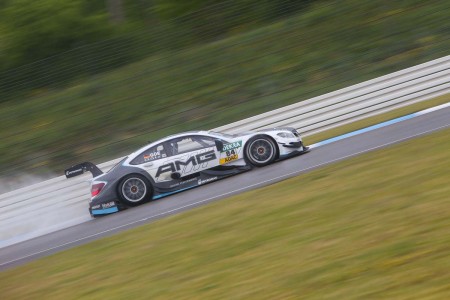 The first of races, the one taking place in Hockenheim this past Saturday, May, 2nd, was not going to be any other way but explosive. After a qualifying session knocked down by Jamie Green, it was still him to comfortably sit in the lead, right after the green light was on. Once past the first corner, Green set off for his own race, a race that certified that Audi is having a good moment, despite all speculations that badged them as outsiders in 2015. BMW was a disappointment, as their first racing car was barely found in the 10th spot of the grid – Augusto Farfus.

After the start, Pascal Whrlein and Paul di Resta took second and third positions, in a Mercedes-AMG brotherly duel. As a matter of fact, no major events happened at the top, as the race came off quite smoothly and steadily. But at the back, starting the seventh spot, things were slightly mental. Retirements equally cut to pieces the auto makers involved in DTM: Robert Wickens and Daniel Juncadella (Mercedes-AMG), Timo Scheider and Edoardo Mortara (Audi), Tom Blomqvist and Martin Tomczyk (BMW). 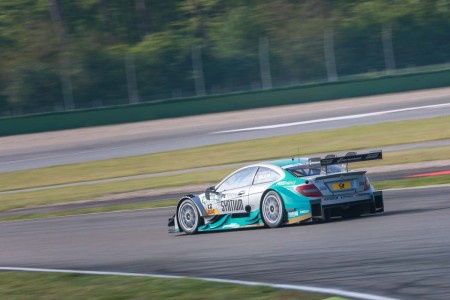 Subsequently, the abbandon of Lucas Auer meant first failure for a DTM newcomer in 2015, as the dreams of the young Mercedes-AMG driver were shettered in a clash caused by the „enemy” Tomczyk. Actually, the race was twice interrupted by the show up of the Safety Car, the only thing that spoiled the almost flawless pace set by Jamie Green ahead of the contestants.

By the end of the extra lap run after the exact 40-minutes, the chequered flag was – for the first time – picked up by Green himself. The podium of the starting round in Hockenheimring was rounded by Pascal Wehrlein and by Paul di Resta, a beautiful triumph for Mercedes-AMG. The best positioned driver in BMW was Maxime Martin, but his seventh place is far from the legitimate expectations of the Bavarians. And we must keep in mind that Marco Wittmann is the DTM ruling champion, the one bearing the number 1 and only finishing first round in the ninth position.

The long Sunday round

On Sunday, according to the new DTM format, a longer round is run, the one made up by 60 minutes plus an extra lap. The difference from the Saturday race is set by the a mandatory stop at the pits for all drivers, who, apart from the previous seasons, in 2015 they must also complete a qualifying round on the exact same day of the race. 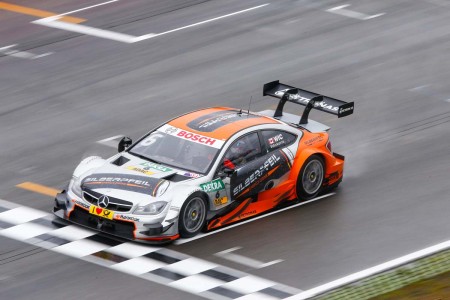 The pole position was knocked down by Mike Rockenfeller. Rocky was but a flash in the pan, because he was completely flushed at the start, quite a failed one, that gave Wittmann the possibility of clearing the skirts of BMW from the first race and reach a position which would have been worthy of his competition number. But the young champion was caught from behind quite fast, by Mattias Ekstrom and by Eduardo Mortara. First drive of the Swedish fox, a championship veteran who seems to be more and more competitive. 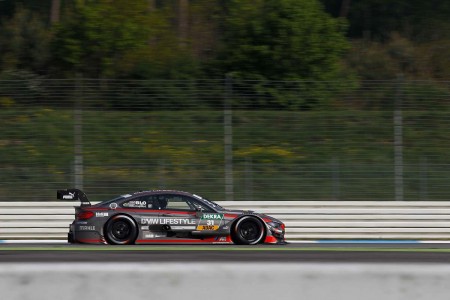 The blitz was the rain, which came to mess up with the plans regarding tires. A constrained journey to the pits followed, of which one of the steadiest and best drivers of the modern DTM era, Ekstrom, came out favoured. The congenial Mattias came out on top in Hockenheim, in an Audi double that not even the Ingolstadt auto maker would have honestly hoped for. 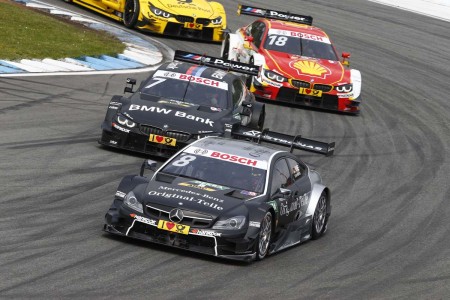 More by token, the podium of the second day was rounded up by Edoardo Mortara and by Gary Paffett, therefore, a triple with four circles. The first BMW only came in fourth, as it was the one driven by Martin Tomczyk, who, as if keeping in mind the Audi era, he parked in the closed car park, next to the RS5 DTM models. Unfortunately for Mercedes-AMG, the second round of the 2015 season was a failure, with the first racing car barely coming in seventh (the Canadian Robert Wickens). 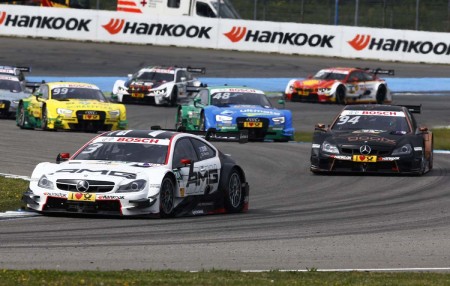 The aftermath goes by no means according to the fancy of the starred brand, that had an weekend they will not dearly remember. Somehow, they keep on the not so good circumstance of the past season, when Mercedes-AMG mostly functioned on idlesness, n matter the squad, nor the drivers fighting for the brand. The situation is more displeasing as the sister-squad in Formula 1 is going like a bomb and the pressure set on the shoulders of the DTM program conductors might clos in on them in the near future. But before that, Audi is rejoicing and Mercedes-AMG can find comfort only in the BMW performance, which is as bad as theirs.