Monster for sale. How much does a Mercedes-Benz G63 AMG 6×6 get to cost nowadays?

It is what it is. A monster on wheels. Six of them, actually. On three portal axles with complicated geometry, similar to that of the Unimog axles. All wrapped up wtih 700 horsepower. They all come for a jaw-dropping price of 800,000 Euros. The off-roader is now for sale in an exotic cars dealership in Germany. 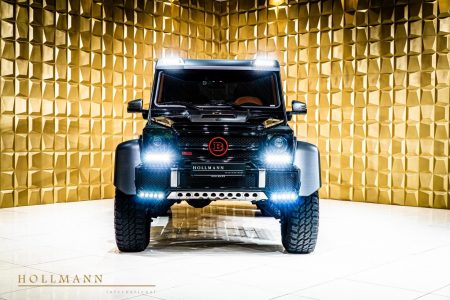 It is not just any Mercedes-Benz G63 AMG 6×6, but one tuned by Brabus. It rolled off the assembly line of the factory in Graz, Germany, where the entire G-Class family sees the light of day, in 2013. The models features an almost half a meter ground clearance. It simply uplifts it above rough terrains tht might seems impossible to most high-ride vehicles.

The model that got out of the hands of the Brabus engineers wears the Obsidian Black Metallic paint and 18-inch wheels with one-of-a-kind design. It also received new bumpers, a new hood, extended thresholds and redesigned wings, all in carbon fiber.

The square bonnet shelters the 5.5-liter V8 twin-turbo engine that the German car maker has stopped building. The engine transfers torque all six wheels via an AMG Speedshift Plus 7G-Tronic. 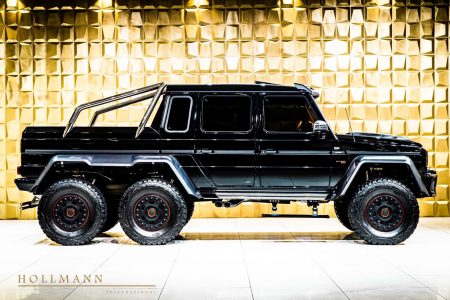 All these tweaks should explain the price difference of the standard 6-wheel Mercedes-AMG from 7 seven years ago and the price that the owner asks for.

The model remained in production for only two years as Mercedes intended to keep it as exclusive as possible. The real number of the units the company sold was always under wraps. But unofficial sources claim that it may be anywhere between 100 and 150 units, with most of them being delivered to the Middle East, to join the exotic fleets of Arab princes.