One the most anticipated films of the year, Furious 7 features all the spicy ingredients fans of the series love: amazing cars, visually dazzling locations and beautiful women. Among the stars shine two Mercedes-Benz models, the G-Class and the S-Class, none other than the vehicles of choice for the villainous Jason Statham’s henchmen.

The G-Class has been heavily modified to mimic the look of armored military vehicles. Among the modifications, we notice all-new matte-black body panels, coupled with perforated metal plates covering the windows for bullet-protection. In contrast, the S-Class are plain jane W220 models with black paint. The only movie props seem to be the chromed 21 or 22 inch alloy wheels. 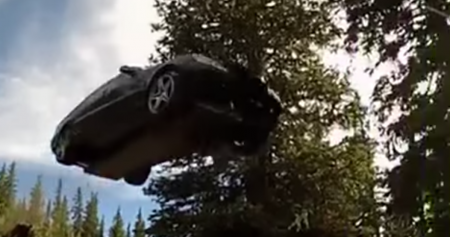 We do not want to spoil anything, but we can reveal this much: the S-Class will literally fly, as tradition dictates in the case of Hollywood extravaganza.

Starring alongside the above mentioned Mercedes-Benz models, Vin Diesel, Paul Walker, Jason Statham and Dwayne Johnson are a handful of other gorgeous sports cars, including a Ferrari F458, a Bugatti Veyron, an Audi R8, a McLaren MP4-12C, a few Dodge Chargers, a Nissan GT-R, a classic Dodge Charger and a Lykan Hypersport.

Check out the extended Furious 7 trailer in the video below, two months before the official movie premiere on April 3.