Mini Countryman has never showed up on Mercedes’ radar. Until now. Starting with the all-new generation, expected to debut sometimes next year, the Britons plan to move up and challenge directly the highly successful GLA.

The latest spy pics reveal the new model is set to adopt a more rugged, boxier shape. All that while keeping the classic MINI shape and signature detailing, of course. Tech-wise, Mini’s new crossover will use the wide-spread UKL platform, the same architecture found in the BMW 2-Series Active Tourer and the all-new X1. So, in essence, the future Mini Countryman is basically a BMW X1 in disguise. Hence, the GLA association.

Front wheel drive will be standard, with the ALL4 all-wheel-drive system offered as an option. Top versions including the Cooper S should come with 4×4 per se, though. The engine line-up is hardly a surprise with the 1.5 litre three pot engines that have made their debut on previous current MINI models taking center stage and the two liter turbo four-cylinder engine reserved for the Cooper S variant. An all-new eight speed Aisin automatic gearbox will also be available.

Safety will also be paragon with a full list of safety and comfort enhancing features like a head up display, a parking assist system, collision and pedestrian warning systems as well as a speed limit information system available. 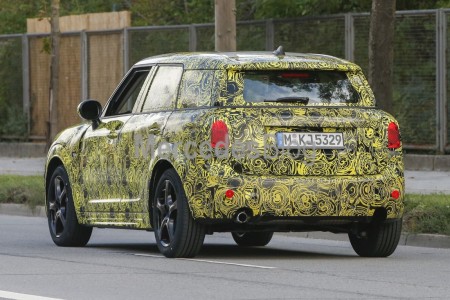 Since the Mini line-up will be limited to five models only, the new Countryman should be the fourth member of the family. It will join the current MINI Cooper (3 and 5 doors), the soon to come Clubman and, possibly, a new sportscar or roadster (Superleggera concept) that will replace the outgoing Coupe and Roadster.