Mild (by BRABUS standards) tuning for the Mercedes-Benz V-Class

The first reaction when hearing that BRABUS did its dirty work on a V-Class was “cool, a 850 hp van”. It all went downwards from there…

You have to ask yourself why would you want a tuning package for a car – no, a van – such as the Mercedes-Benz V-Class. Well, answers on a postcard, but until the mailman reaches us, we can only speculate that just because you opted for a large vehicle that specializes as a people carrier, it doesn’t mean you’re not interested in a bit of personalization.

With that in mind, BRABUS started by offering V-Class customers an aero kit that does two things: first and foremost, it makes the van look meaner and second, it reduces front end lift for better handling during corners.

If the wheels had stayed the same, that would have been a first in the tuning world, so BRABUS duly complies and offers a choice of 18 and 19 inch rims. They have also lowered the ride height by no less than 15 millimeters, which sets it at around 25 millimeters. This is part of the suspension adjustment that also comprises of a special set of sport springs calibrated for the production shocks. 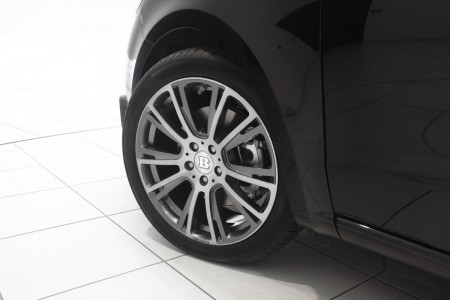 It feels a bit funny talking about sportiness in conjunction with a van, but if BRABUS does it, so will we. At the rear, flanking the air diffuser there’s a BRABUS quad  sport exhaust system sticking out which gives the V-Class a rather surreal look that will make a lot of people rub their eyes in disbelief.

On the interior, the BRABUS V-Class comes with the proprietary business/entertainment system showcased at the 2015 Geneva Motor Show consisting of two 15.6 LCD screens displaying images from Apple TV, a Blu-Ray player or a DVBT receiver. The audio can be routed towards a set of wireless Sennheiser wireless headphones. 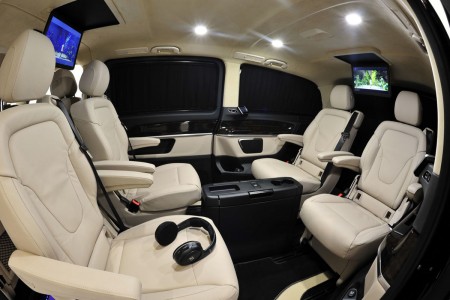 All these suspension modification talks make us hungry for some beefier power figures. BRABUS is game and came up with the PowerXtra D4 performance kit for the Mercedes-Benz V 250 BlueTEC, which boosts the engine’s power by 45 hp and 70 Nm. Therefore, the BRABUS V 250 BlueTEC is good for 510 Nm between 1,400 and 2,400 rpm and 235 hp, enough for an 8.8 seconds sprint from 0 to 100 km/h.

If, by some reason, you’re interested, you can go check out the www.brabus.com website and try your own configuration.