“Beyond the Reach” is a new movie that stars Michael Douglas and Jeremy Irvine as main characters and the Mercedes-Benz G 63 AMG 6×6, that is said to be a character of its own.

Michael Douglas plays a corporate shark that embarks on a deadly cat and mouse game. Madoc, the character played by Michael Douglas, is a ruthless businessman who hires and expert guide to lead him on a hunting expedition in the desert, then abandons him to die after a disagreement regarding the death of an old man. For Ben, the guide, the test of survival begins in one of the merciless environments on Earth, the Mojave Desert. Michael Doughlas’ character is a calculated villain who follows Ben from distance in order to make sure that the heat will “take care of the problem”, but it will soon become a hunting game between the two of them. 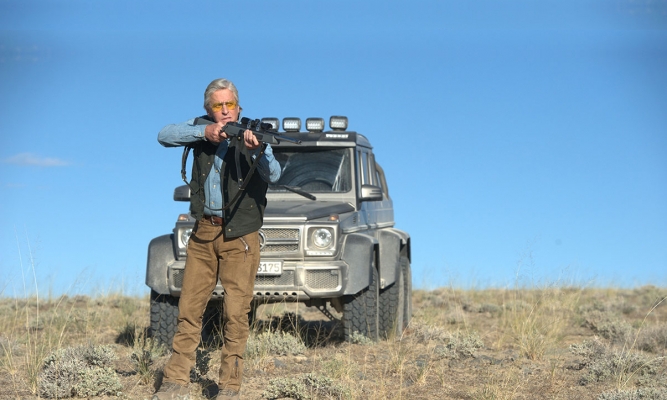 Madoc’s faithful partner in crime is the mighty Mercedes-Benz G 63 AMG 6×6, the third star of the film actually. It becomes a villain along with Michael Douglas and Irvine’s character, Ben, fears it every time it appears. Obviously, the movie is suspenseful, a modern take to the old 1970s westerns containing a moral dilemma, that everything you do, be it good or bad, you will end up paying for it.

The G 63 AMG 6×6 was a prototype and the only one of its kind at the time. The vehicle was flown by Mercedes on a cargo carrier jet to Houston and then trucked to location in New Mexico. Mercedes also sent a German engineer to oversee the 6×6 during the shoot. Furthermore, the articulating automatic floodlights, a motorized gun compartment, espresso machine and microwave were added by the art department of the production.

The movie is based on Robb White’s novel Deathwatch and the film will be released on 17th April in the US.