The X-Class joins the VW Amarok. Both pickups have powerful V6 engines with 258 hp under the hood. But the Benz costs a lot more. Is the extra charge worth it? Mercedes X 350 d test.

So far, the VW Amarok was the lead wolf among the pick-ups. Three-liter diesel with six cylinders and 258 hp, because the Mercedes X-Class of Mercedes could only lag behind with its four-cylinder engine. But now Mercedes is fighting back. Behind the massive radiator star of Mercedes now is also installed a six-cylinder, 258 hp strong and with an enormous 550 Nm. Customers have to invest at least 44,840 euros for the powerhouse, compared to the base models available from 39,900 euros.

Buyers, however, have to live with the fact that they get with the X 350 d the slowly expiring V6 with seven-speed automatic and not the new, up to 340 hp straight six-cylinder with nine gears. A shortcoming is not, in principle, the V6 engine has enough buzz. But in the new in-line engine, two turbochargers in series bring virtually full power out of idle. The V6 of the X-Class, however, has only one turbocharger. And until it comes up to speed, it takes a few milliseconds when starting up. If the driver does not dose the gas sensitively enough, the load buckles. At the latest at the third traffic light, however, the gas foot has adjusted to it. 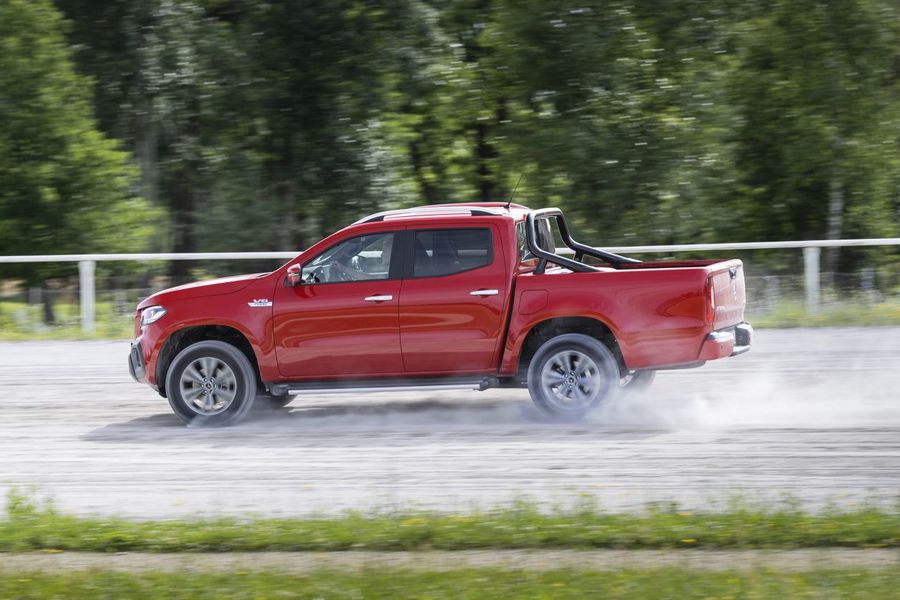 After 7.5 seconds, the 2285 kilogram pickup truck reaches country road speed, at 205 km / h the maximum speed is reached. In sports mode, the interaction between the drive and the gearbox works most harmoniously and the light onset weakness is best concealed here. The Eco and Comfort programs are ideal for relaxed highway driving, while off-road off-roading is the right choice.

3.5 tons on the hook? You do not feel it
But do you really need six cylinders? A car that you can not drive under ten liters of fuel consumption? Contractors, gardeners or horse lovers, who are always hooked and may be traveling in the mountains, will not want anything else after their first trip. Even with a 3.5-tonne trailer, the V6 only takes a deep breath once before sending its 550 Nm to the two-stage transfer case of the rear axle and setting it on a straightforward course. In off-road, the driver can switch to 4H mode for improved traction. 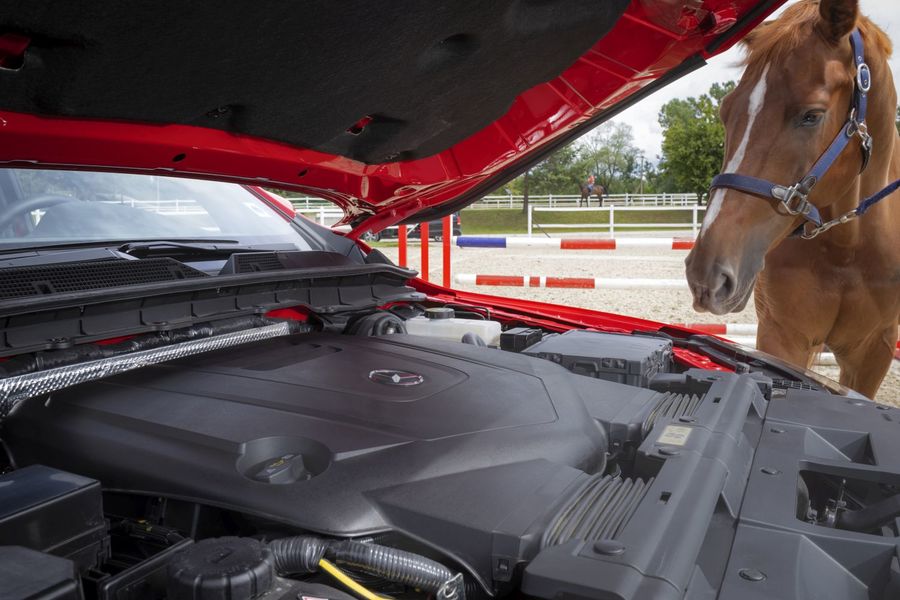 Or he immediately chooses the off-road program with reduction, longitudinal and transverse differential as well as electronic downhill assistance. With 222 millimeters of ground clearance, 60 centimeters of fording depth and 50 degrees of inclination, the X-Class then climbs through regions that are found in Germany at most in the closed course. Especially helpful is the front camera. It points the way when nothing more than a blue sky can be seen on a 45 degree steep hill through the windshield.

Thanks to the permanent four-wheel drive, which is designed with a load distribution of 40:60 (front / rear) rear-biased and provides good traction, the X350 d can also move a bit faster on asphalt and gravel. The optional differential lock on the rear axle, a variably adjustable longitudinal differential lock or the electromechanical multi-plate clutch and the reduction ratios for heavy terrain also help here. A real benefit is the fact that the reduction can be activated up to a speed of 40 km / h, and the off-road fans do not have to stop. Even without adaptive dampers, which are not an option, the X-Class 350 d quickly swallows successive transverse joints much more confidently than the little brothers. Compared to the four-cylinder brings the top diesel, the X-class much closer to other Mercedes. 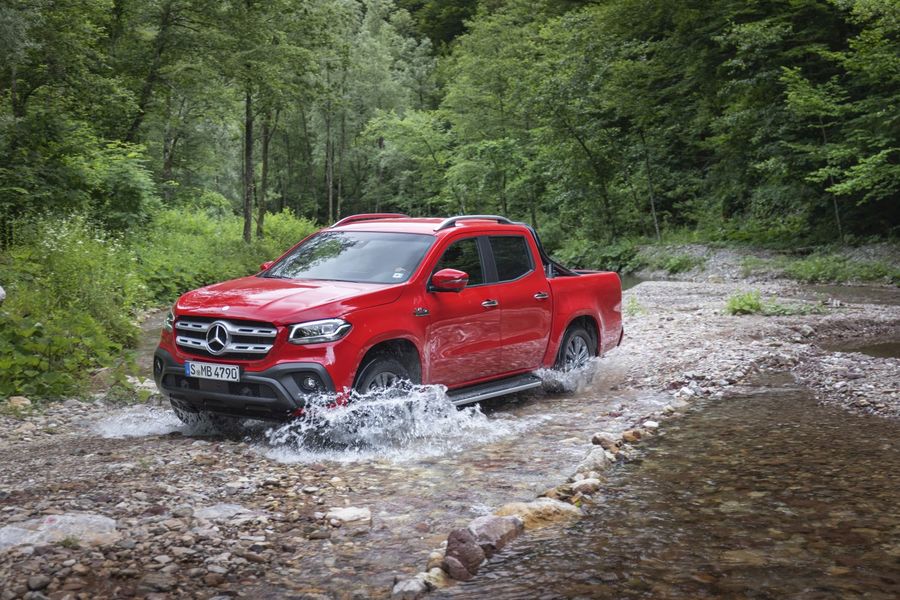 As a rule, however, the pick-up will take asphalt under the wheels, where it will benefit the car-like handling. Long-legged drivers complain that the steering column can only be adjusted in height. But otherwise you feel like in every Mercedes in the X-Class. The safety features include seven airbags, LED headlamps and trailer ESP and collision warning with brake intervention, lane departure warning and traffic sign display. There is no intelligent distance control though.

As far as pricing is concerned, a Mercedes is still a Mercedes. Who does not want to spend a lot will possibly choose the VW. The Amarok 3.0 TDI costs 3,000 euros less, but is the noticeably older model here. 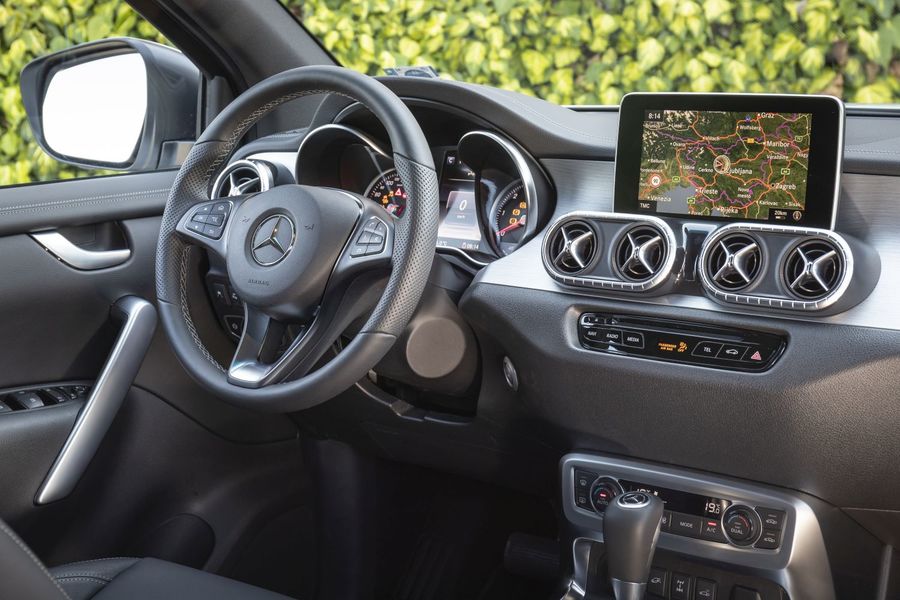