Mercedes Vision EQ A, the smallest member of the all-new EQ family of fully electric Mercedes cars will debut next month at the IAA Frankfurt motorshow and we have the first official picture to prove it.

Whether wanted or unintentionally – Mercedes has delivered a first teaser for the stand at the IAA in which can also be seen completely unmasked the electric SUV study Mercedes Vision EQ A.

Mercedes will present its first full-electric EQ concept car in the compact segment at the IAA in Frankfurt on its exhibition stand. This is a purely electric-powered SUV, the first harbinger for further compact, purely electrically driven Mercedes models.

A first look at the new study is given by the Autobauer, intending or not, with the first teaser image for the exhibition stand in Frankfurt. The Vision EQA Coupé is located on the central podium, next to the series-based Mercedes-AMG Project One show car. The Mercedes Vision EQ A – we derive the name from the well-known nomenclature study = vision, EQ = new E-series, A = compact models – looks like a round-lined Mercedes GLA.

The study also focuses on the typical blue radiator grille and slit-shaped LED headlights. The compact SUV, designed as a two-door compact SUV coupe, carries rear-facing cameras on the roof rails instead of exterior mirrors. 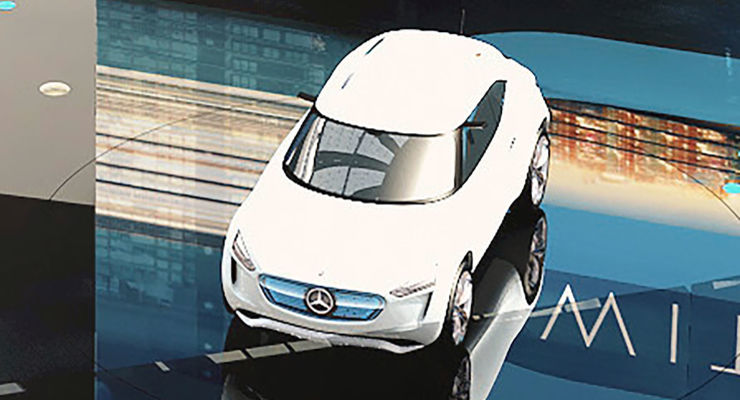