There are clues that AMG is preparing an electric GT with autonomous capabilities. Spy photos of the electric Mercedes SLS AMG wrapped up in bars full of cameras and sensors have emerged sparking the rumors of a future supersmart supercar.

Car Magazine reports that no such car is planned for the near future, even though the SLS E-Cell has been spotted in Germany this week, but it might happen sooner or later. AMG though confirms commitment to electrification, with its four-door sports coupe with EQ Power+ sporting the 4.0-liter petrol V8 engine integrated in a hybrid system. 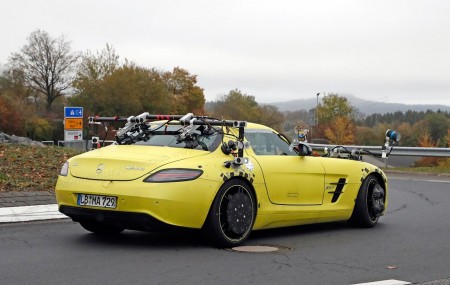 The bars with cameras and sensors are there to gather telemetry data in terms of electric range. Why aren’t they doing this with any other car in the current portofolio of the three-pointed star brand? Car Magazine has snatched the information from an insider, saying that Mercedes is trying to fuse the high-performance electric drivetain and the latest sensors/cameras for autonomous driving.

The SLS AMG is the ancestor of today’s wide GT range. In 2010, once the series production stopped, Mercedes rolled the electrified model off the assembly lines, in what seemed to be the swansong of the high-performance car. Eventually going by the name of SLS Electric Drive, the vehicle was an extremely limited series, but, way ahead of its time, it never made it to the hearts of the supercars enthusiasts.