Autonomous S‑Class Mercedes Saloon prototype is being put through its paces in test drives in the heavy traffic and exposed to the special national features in the Chinese megalopolis of Shanghai in October.

Pedestrian crossings on the motorway, separate speed limits for each lane, traffic signs with Chinese characters – traffic in China differs from that in Europe or the USA in many aspects. That is why China requires foreign motorists to have a Chinese driving licence. Automated and autonomous vehicles also have to prove their fitness for this market in advance. Mercedes-Benz started the ‘Intelligent World Drive’ at the Frankfurt International Motor Show (IAA) in September to adapt more highly automated driving functions to national user and traffic practices.

Urban traffic is one of the biggest challenges on the road to autonomous driving. Automated driving functions must be able to master highly complex traffic situations, which can differ greatly around the world to boot. The focus of the test drives in Shanghai is on assessing the driving behaviour in extremely heavy traffic with its different participants, as well as on infrastructure peculiarities. 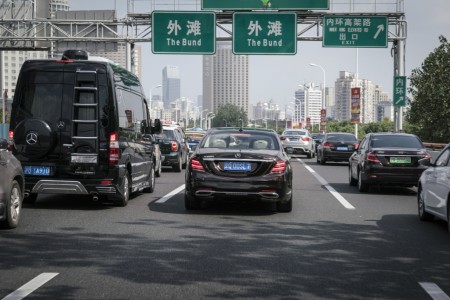 The high density of cars, two-wheelers, three-wheelers and pedestrians and the associated traffic behaviour in Chinese cities pose different requirements on automated driving functions than in Europe or the USA. In addition, there are road signs with Chinese characters and lane markings, which in China have different or even multiple meanings. For example, short white lines, known around the world as pedestrian crossings, can also be found on motorways. However, they don’t denote a pedestrian crossing, but the minimum distance between vehicles. The sensors must be able to recognise this and interpret it correctly. The same is true for speed limits, which can differ from one lane to another. Another challenge: Parking spaces come in many different shapes and frequently are full of obstacles that are hard to detect for sensors.

These special national features show how important it is to gather worldwide insights into real-life traffic on the road to autonomous driving and to adapt automated driving functions to the particular traffic practices and conditions. In the past seven years, Mercedes-Benz conducted about 5100 test drives around the world with 175 test mules for validations of driver assistance systems in the field alone. The performance of the driver assistance systems was assessed on some 9.5 million kilometres in Europe, the USA, China, Australia and South Africa, and more than 1.2 million measurements were made especially in real-life traffic situations for their continuous advancement. 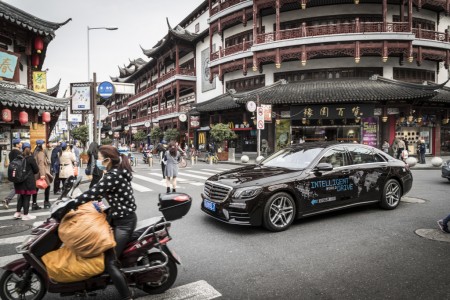 With the ‘Intelligent World Drive’, Mercedes-Benz is testing automated driving functions on five continents using a test vehicle based on the S‑Class. Over a period of five months, the saloon will face traffic situations of different complexities to gather valuable experiences on the road to autonomous driving. The first leg took place in Germany in September. This test drive focused on assessing the specific driving behaviour on motorways and in tailback situations, an important component for the development of future technologies. The second leg in the Shanghai megalopolis will be followed by test drives in Australia in November and South Africa in December. The focus in Australia will be in particular on the validation of the latest digital map data of HERE, whereas in South Africa pedestrian detection in many new situations will play a major role. The final stop of the ‘Intelligent World Drive’ will be the CES in Las Vegas in January 2018. The test drive in Greater Los Angeles and afterwards on to Las Vegas will concentrate on evaluating the driving behaviour in heavy American urban traffic and in tailbacks as well as when traffic is overtaking on the right on highways. 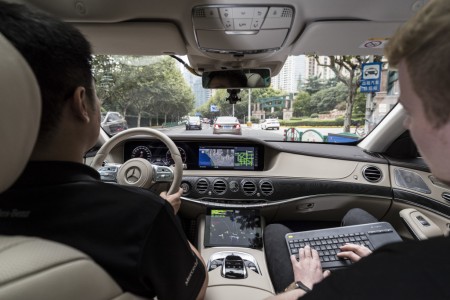