Mercedes teases the V12 Maybach. What comes next?

Mercedes-Benz is working on a V12 Maybach. The luxury sub-brand is now teasing the future top-of-the-range variant.

The V12 Maybach will proudly sit at the top of the range. Mercedes showed a photo of a W223 sporting a V12 badge on the front wing on the occasion of the brand’s centenary. The car maker thus cuts off speculations that a V12 engine would be dropped for this generation. The W223 Maybach is currently available only with the 4.0-liter twin-turbo V8. 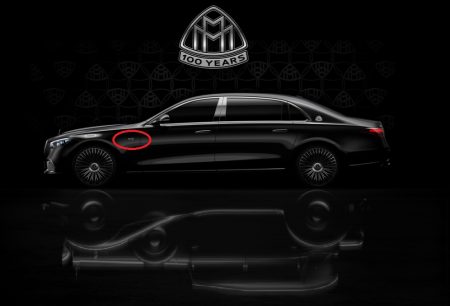 The Germans are keeping most o the details under wraps. But for the moment it is certain that it will be powered by a 6.0-liter twin-turbocharged engine with mild hybrid technology. The car will get the badge S 680. It should churn out in excess o 600 horsepower, 612 to be more precise. A 4MATIC all-wheel drive system and a 7-speed automatic transmission should channel resources to both axles. It will be the first time a V12 engine will come with an all-wheel drive..

Mercedes unveiled the new Maybach S-Class in the beginning o March. The entry-level version – if there anything entry-level about it – is the S 580 4Matic. It comes with a 4.0-liter V8 with mild hybrid tech, that develops 510 horsepower. An integrated starter generator provides it with extra 22 horsepower.

A plug-in hybrid Maybach will follow the V12 version

A Mercedes-Maybach S 580 e Plug-in Hybrid is also in the works. It will get a new 3.0-liter inline-6 turbo engine with 367 horsepower, that will operated together with an electric motor of 150 horsepower. The system output will be of 510 horsepower, with a peak torque of 750 Newton meters. A 9-speed automatic transmission will transfer resources to the tarmac. A 28.6 kWh battery pack will store energy and will be capable of charging with up to 60 kW in only 30 minutes, when connected to DC stations. The battery unit will provide the car with an impressive electric range of above 100 kilometers.