Launched back in the summer of 2013, the new Mercedes S-Class has the most complete hybrid program in the luxury segment and the Mercedes S 500 Plug-In Hybrid is the first Plug-In Hybrid luxury saloon. The first test in Copenhagen.

It may seem surprising, but, although it is a brandnew model with less than a year since launching, the new S-Class already has three hybrid versions: two mild hybrids – S 400 Hybrid (it puts together the aspirated 3,5-liter and 306 HP V6 engine wiht an electrical 27 HP engine) and the S 300 BlueTec Hybrid (it mixes the same electrical 27 HP engine with the 2.1 litre biturbo 204 HP diesel) – and a full hybrid that can plug into an electrical socket – the S 500 Plug-In Hybrid.

But let’s go back to the S 500 Plug-In Hybrid. The official informations are spectacular. The electrical engine, developed together with the Porsche, produces 116 HP and 340 Nm and can fully electrically propel the car up to 140 km/h. Gently pressing the throttle, the Lithium-Ion 8,7 kwh battery provides an electrical autonomy of up to 33 km. Then the famous V6 3-liter biturbo, generating 333 HP and 480 Nm cuts in. Altogether, the system provides 442 HP and 650 Nm and propels the S 500 Plug-In Hybrid from 0 to 100 km/h in 5,2 seconds (4,8 seconds for the long wheelbase S 500) and then up to 250 km/h. According to the European cycle measuring the fuel consumption that very much favours the hybrids, drawing in a high percentage assigned to the in-city drive, the proclaimed average fuel consumption is of only 2,8 l/100km (3,1 l/100 km for the Porsche Panamera S E-Hybrid).

There is something more important than the figures. This Plug-In luxury hybrid is very effective for the in-city drive for shorter than 33 km distance and if you don’t push the throttle over a predefined position. In this case, the heat engine will never start, as the zero gas emission drive is for real.

Mercedes conceived an intelligent drive style in multiple modes: Hybrid, E-Mode, E-Save and Charge, combined with three transmission types: E (Economy), E+ (Economy Plus) and S (Sport). Up against a normal S-Class, the Comfort (C) mode was practically replaced by the E+. Of all the transmission types, the E+ is the most effective, as all the intelligent fuel consumption saving systems are on in this mode:

– If the destination is inlaid in the navigation system, the energy usage of the battery is rightsized by the help of the Comand Online system, which provides data regarding the route profile and the speed limit. For example, the battery energy is employed in up-hill drive and the energy is recovered when descending.

– Based on the radar technology, the energy recovery is more effective when coming close to the vehicle at the front. The radar sensors measure the distance from the front vehicle and the speed gap by delivering a double discrete impulse into the throttle for the driver to lift the foot from it. Therefore, if the transmission is in the E+ mode, two things come about: if the car at the front does not reduce speed, then the radar system stops the Otto engine and disengages from the transmission, as the car goes into the “sailing” function and if the vehicle at the front reduces speed, than the radar system activates the braking and the energy is recovered. This function is available in speed higher than 60 km/h for not bothering the driver in traffic jams by double impulsing the throttle.

The defined mark of the heat engine cutting in, in the throttle travel, allows relaxed driving in the electrical mode

In the E-Mode, the fully electrically rolls as much as possible. For the driver not to exploit the throttle, the pressure point the driver must not go over is on and the heat engine does not start unless the throttle is heavily pressed on. If the heat engine used to start at the slight bite of the throttle in models like Lexus, the usage margin of the throttle travel in the electrical mode is way larger in Mercedes. And, quite practical, the moment the heat engine starts is clearly defined, as the throttle encounters a pretty higher resistance. Along the test itinerary roads of Copenhagen, the real electrical autonomy varied between 20 and 33 km. The heavier the traffic is and the more it brakes, the bigger the energy saving is and the higher the autonomy becomes. It is actually, exactly the opposite of a heat engine for which the traffic jams raise the fuel consumption.

The electrical 33-kilometers autonomy can be reached for real

E-Save is also a very intelligent mode, as it entirely preserves the battery capacity for a future stage of the ride, when after a long highway drive, the S 500 Plug-In Hybrid gets into a metropolitan crowded area. If the navigation route is set, the charge/discharge battery process is better managed for optimal energy usage.

There is also a Charge mode during which the V6 engine actually charges the battery and the electrical engine does not work. If you forget to charge the car overnight, the Charge mode is the charging-while-rolling key, but it is not the most effective. However, the use of the heat engine as a generator and on the other hand, the combined power of the heat engine-electrical engine system is not at your service any more.

Mercedes is currently working with BMW for a charging wireless system for which the charging cable becomes useless. The driver parks the car right above the charger and the energy supply is induced. It is a future technology and Mercedes promises it will be available during the current S-Class life cycle. 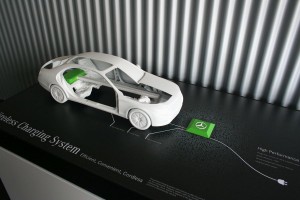 The lithium-ion battery is manufactured by Magna, not Tesla, as we might have thought (Tesla delivers the battery and the whole drive train for the electrical B-Class), it has a 8,7 kwh capacity and can be charged in 4,1 hours the most from a normal outlet and in 2 hours from a wall box. Slightly smaller than the Porsche battery, which deposits 9,4 kwh, the autonomy is comparable: 20 -33 km for the Mercedes, respectively 18-36 km for the Porsche.

As for any hybrid with expanded electrical autonomy, the battery comes up with an extra weight and snatches away from the boot volume. The battery weighs 114 kg and together with the electrical engine and the control unit of the hybrid system, it leads to a 2215 kg unladen mass, by exactly 200 kg more than for the long S 500. We need to mention that the S 500 Plug-In Hybrid is only available as a long version and the price in Germany is exactly the same as for S 500 Long: 108.944,50 euros.

And the boot volume is affected, as it goes down from 530 liters to 395 liters. But Mercedes claims that the S 500 Plug-In Hybrid brings the best compromise between the volume taken by the battery and the available autonomy.

On the other hand Mercedes offer standard as a world premiere an extended pre-entry climate control. Using Mercedes connect me linked with the mobile phone, at the start of the journey the S-Class is air conditioned to the preset temperature if the driver has entered the departure time. But not only the temperature could be preseted but also the heating of seats, steering wheel, and armrests in the doors and in the central console or the ventilation of the seats.

The brake pedal has a linear travel, as it is not affected by the negative feedback when recovering the energy, typical for most of the hybrid cars

Do the extra 200 kg have an impact? How does the brake pedal react? Does it really electrically roll for 32 km? There are interesting questions demanding an answer. The first delightful surprise is the reaction in the brake pedal. For most of the Plug-In hybrids or electrical models (except for the Tesla S, which allows the adjustment of the brake pedal feeling), there is a back stroke in the brake pedal when recovering the energy. It’s not the case in the S 500 Plug-In Hybrid, as the linearity in braking is transcendent. The extra 200 kg mainly pressure the rear axle, as the 114 kg battery is mouned next to the rear axle, which is not bad at all. You don’t feel the extra weight in speeding up. You only feel the rear a bit heavier on speedy bends, but you need to go up to limit, on side speeding up, significantly higher than those scored while usual drive.

In the Hybrid mode, when both engines are working, there are is no obvious dynamics difference from the the S 500

We compared the price up against the long S 500 and we imminently relate to the long S 500 again when it comes to the performance. In the Hybrid mode and with at least 20-30% battery charging and in the Sport mode of the 7-speed automatic transmission, the V6 biturbo 333 HP heat engine works together with the 116 HP electrical engine (442 HP total output) and the response is close to the biturbo 455 HP V8 in the S 500. In the Charge mode, when the electrical engine is not working and the heat engine is charging the battery, the response is obviously slower. 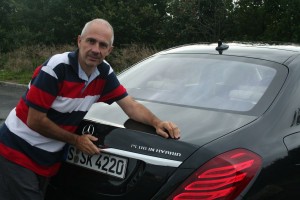 But the fuel consumption advantages up against the S 500 are undeniable, as the difference is to the moon and back, especially in in-city drive. And there is more. The S-Class is the quietest limousine in the world. The wind noise and the roll noise are very much reduced. Therefore, the silence aboard the Plug-In Hybrid is grand. You get the feeling you ride a futuristic spaceship. And not even when strongly pressing the throttle in the Sport mode, as the tuneless whistle of the V6 turbo engine sounds is if it was a far away noise. The V6 is almost just as quiet when in-load as the biturbo V8.

Mercedes will sale S 500 Plug-In Hybrid also on american market as a 2015 model. In US the name will be S 550 Plug-In Hybrid but the propulsion is the same like for S 500. Mercedes will not offer in the US the S 300 BlueTec Hybrid and the S 400 Hybrid will not return after the version based on former generation was stopped two years ago.

The Plug-in Hybrid is the key of the future for the mid class up limousines. Mercedes did not build just another Plug-In Hybrid, but a very intelligent one, that not only charges the battery out an outlet, but also during driving and “knows” exctly how to manage the battery energy. And the electrical autonomy is for real, as the efficiency of the system is clearly proven by the first test. From all these perspectives, Mercedes made a big step ahead of the BMW and Audi, but also ahead of the Lexus, fallen behind after it was a ground breaker in the hybrid technology 10 years ago.