Mercedes remains the second most valuable car brand in the world

Mercedes has retained its position as the second most valuable car brand in the world. Toyota is still number one, for the seventh consecutive year, while BMW still occupies the 2nd place.

Market Research Company Kantar Millward Brown has published a new annual report on the most valuable brands in the world. Mercedes remained second in front of BMW, with both manufacturers declining 9% of market value. Mercedes had a market value of $ 23.3 billion, down 9% from last year. BMW was valued at $ 23,32 billion (minus 9%).

Toyota retained its dominance in the automotive industry with a market value of $ 29.1 billion (minus 3%). Toyota was the most valuable car brand in the world in 12 of the 14 years that this study was made.

Honda has overtaken Ford and climbed 4, while Tesla has exchanged seats with Audi and is now ranked 7th in the top 10. Nissan retained its sixth position in the top 10.

Tesla exchanged seats with Audi and ranks 7th, while Volkswagen climbed up to 9th. This year’s novel comes from Porsche, which surpassed Suzuki and managed to take the top with a ranking on 10th place. 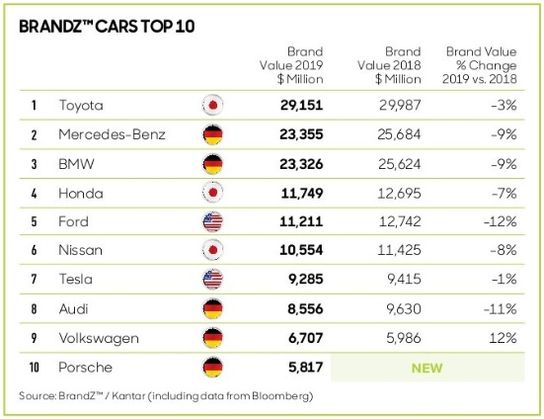