Leave the past behind – looks like these words have been guiding everything Mercedes did during the ’50s. Then, the “Ponton” sedans had shown the way to follow.

By the end of the 2nd World War, about 85% of Daimler-Benz production capacity was disabled. The heavy bombings had left their marks all over the surroundings of Stuttgart. By the other hand, in 1945 the Allies were already aware about the necessity of a fast and efficient reconstruction of the european industry. The Marshall Plan, with a major capital contribution from America, helped this process also in Germany, starting from 1948. However, the activity on the Daimler-Benz industrial site from Unterturkheim resumed earlier, on the 20th of May 1945, with 1240 employees. After rebuilding the facilities, the chassis, body and technique of the pre-war Mercedes 170 were taken as basis for the early post-war production. As an achievement of these ressurection efforts, the first new Mercedes car (with a kind of estate body) rolled out of the factory in May 1946. The assembly of the Mercedes 170 V sedan (W 136) begun in 1947.

Upgraded versions of the pre-war Mercedes 170 came along during the next years, but everybody knew things should change radically and soon in order to secure the brand’s future.

The way to do it was publicly shown in July 1953, when the Mercedes 180 (first version of the W 120 series) began it’s career. The nickname Ponton had nothing special to do with the personality of the car, it was just referring to the kind of design of the front end: tall, vertical edges of the wings, large bonnet, headlamps and grille being held together by an upright frontal panel – all these were particularities of the (by-then) modern, so-called “ponton design”. Beyond it’s completely new look, Mercedes “Ponton” came with some important tehnical innovations: self-supporting body and independent suspension for the rear wheels (swing-axles). 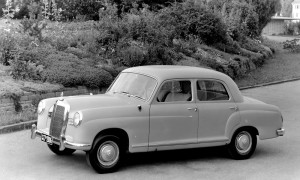 However, since Daimler-Benz had not enough ressources to develop completely different car series for different market segments, the Mercedes “Ponton” served also as basis for the glam-models W 180. Their body was, also, somewhat longer. Caution: the W 180s were 6-cylinder engined cars, so the “180” figure which can be seen in the internal project’s denomination has nothing to do with the official name of the previously mentioned Mercedes 180 (equipped only with  4 cylinder engines). In fact, the official name of these luxurious “Pontons” tells the difference, as they were called Mercedes 220a (introduced in March 1954, with 2,2 litre, 85 PS engine) and 220S (introduced in March 1956, with 2,2 litre, 100 PS engine). Coupe and cabrio bodies were also available. Between 1954 and 1959, 84.645 examples of the W 180 series were assembled. 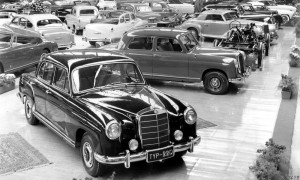 Another member of the “Ponton” family was the W 105 series, officially called Mercedes 219, produced between 1956 and 1959. It’s body had the long nose of the W 180s (their engine compartment was designed to accommodate straight-six engines) and the short main body section of the W 120/W 121, with less legroom for the passengers sitting on the rear bench. The engine was similar to the one in the Mercedes 220a (2,2 litre, 85 PS), but the finition was less refined.

The most luxurious Mercedes “Ponton” was the W 128 series, produced from 1958 to 1960. All of them were fitted with straight-six 2,2 litre engines.

Officially called Mercedes 220 SE, the W 128s had the longest wheelbase in the Ponton-family: 2819 mm. Almost all of the visible parts of the interior were covered with leather (also the luggage compartment) and an automatic clutch for the 4-gear mechanical transmission was offered as an option. 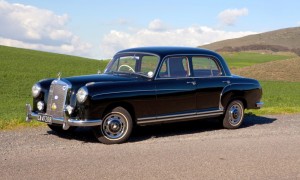