Mercedes-Maybach S-Class receives a mild update, which sees the luxury version of the S-Class get classy two-tone paint and lavish new interior trims, just in time for the Geneva Motor Show 2018, next month.

The original Maybach was a big failure for Daimler. Only 3,000 units were sold from 2003 to 2013, when the brand was closed. But Mercedes did not give up and use the Maybach brand to create a luxury version inside the new S-Class range. The move was a real success. Since the market relaunch of the Maybach in February 2015, over 25,000 Mercedes-Maybach S-Class models were sold. In 2017, more than 1 in 10 S-Class models sold was a Mercedes-Maybach.
Hot on the heels of the Mercedes S-Class facelift revealed last year comes the refreshed 20-centimeter longer luxury version. After three years since launch, the Mercedes-Maybach S-Class is now visually more distinct from the normal S-Class. Among the biggest changes is the new radiator grille, inspired by a pinstripe suit, Mercedes explains. This a modern version of the classic Maybach grille with 25 vertical struts, which was used for the first time in the Vision Mercedes-Maybach 6 study. Redesigned headlamps and front bumper are already known from the S-Class facelift.

Taking inspiration from the first Maybach revival model, built at the dawn of the new millennium, the facelifted Mercedes-Maybach S-Class will be available in two-colors paint schemes for its upper and lower body sections. A total of nine different two-color finishes are available for the new Maybach.  On request, Mercedes paints dark colors by hand with a second layer of clear lacquer to make them look deeper and more brilliant. 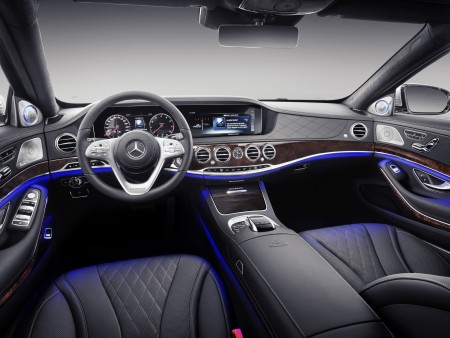 The S 650 Cabriolet donates its chromed rims, in the 20-hole multi-spoke style. Alternatively, there are two more 20-inch wheelsets to choose from. For the interior, which is equipped as standard with executive seats in the rear, Mercedes offers two new color combinations: armagnacbarun / black and savannabeige / black. If you order black nappa leather, you can choose contrasting seams in copper, gold or platinum. The wood is now also available in the Designo variant Magnolia Flowing Lines.

The exterior dimensions remain unchanged. The wheelbase and length of the 5.46 meter long Mercedes-Maybach surpass the S-Class long version by 20 centimeters each. Thus, the luxury version of the luxury sedan is 33 centimeters longer than the regular wheelbase S-Class.

Maybach buyers can choose between V8 and a V12 engines, both with twin-turbo charging. The four-liter V8 in the Mercedes Maybach S 560 offers 469 hp and 700 Newton meters and it can also be combined with 4Matic all-wheel drive. The six-liter V12 in the S 650 delivers 630 hp and 1,000 Newton meters – exclusively to the rear axle. The S 560 accelerates from zero to 100 km / h in 4.9 seconds – regardless of whether it is equipped with four-wheel drive or rear-wheel drive. The V12 does this exercise two-tenths faster, in 4,7 seconds. Maximum speed is electronically limited at 250 km / h. 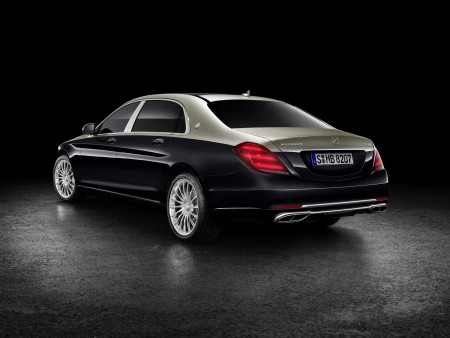