The Maybach is coming back in a different form, but with the same peerless exclusivity and high-end luxury. First drive with the new Mercedes-Maybach S 500.

Mercedes had not been too lucky with the Maybach revival in 2002. Based on the 1998 Mercedes S-Class platform, they failed to differentiate it from its Mercedes S-Class model range. Less dynamic than the Rolls-Royce and with a name almost unknown outside Germany, the Maybach 57 and 62 and its derivates registered very poor sales, much less than Mercedes expectations.

Daimler CEO, Dieter Zetsche, took a radical decision in November 2011 and announced that the brand would cease to exist in 2012. The official announcement came on August 14, 2012, while the last Maybach was manufactured in Sindelfingen on December 17, 2012.

But the death of the Maybach creates enough room for new versions of the Mercedes S-Class. Zetsche’s move was very clever, with four new S-Class versions from which two are completely new. The existing CL coupe was integrated in the S-Class range, as the S-Class Coupe and a new Pullman were launched. But the new Mercedes-Maybach and the S-Class cabrio (full four seater, textile roof) were never exist in the S-Class range.

By the way, Mercedes-Maybach is not an equipment line but a sub-brand. In fact, it is the second sub-brand alonside Mercedes-AMG. Mercedes has plans to offer other Maybach models in the future, in a more exclusive form and the first candidate seems to be a car based on the next GL generation. 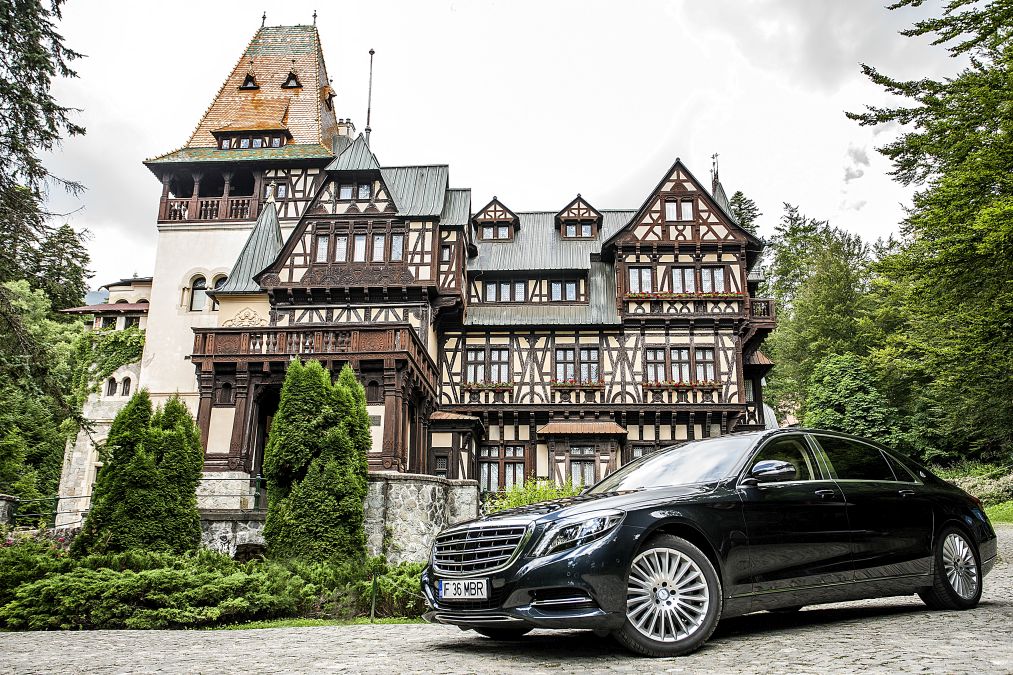 Mercedes-Maybach S 500 in front of Pelisor Castle, near the Peles Castle

We drove the Mercedes-Maybach S 500 which is, more or less, the natural successor of the Maybach 57.  The former Maybach 57 had a length of 5.73 meters with an wheelbase of 3.39 meters. The new Mercedes-Maybach measures 5.453 meters in  length with an wheelbase of 3.365 meters. So, we are talking about almost the same wheelbase, despite the fact that the new Mercedes-Maybach is 280 mm shorter than the old Maybach. There is so much space in the rear, so we won’t regret even the longest and ugly Maybach 62. From the 207 mm length increase, 200 mm were used to lengthen the wheelbase. Mercedes claims that the kneeroom space in the rear has increased from 166 mm in the case of the V 222 (the long S-Class) to 325 mm in the case of the X 222 (the Mercedes-Maybach).

The new Mercedes-Maybach offers as standard the executive seats on the left and right which are on the option list on the long version of the S-Class.  The backrest is adjusted separately while the footwell and seat reference point remain unchanged. The cushion can be adjusted also separately. The backrest angle varies between 43.5 degrees in the most relaxed position and 19 degrees in the most upright position. The executive seats includes also a calf support which could be adjust for length and angle and an extra cushion for the head restraint. 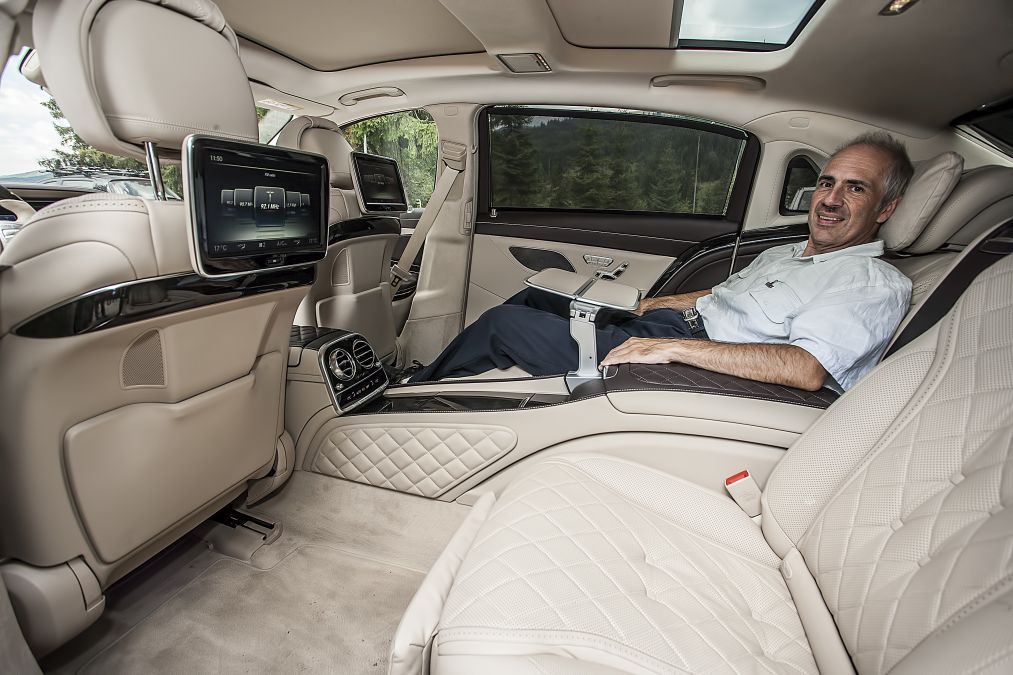 Executive seats and Chauffeur package are standard on Mercedes-Maybach

The Chauffeur package is also standard for Mercedes-Maybach and include 77 mm more footroom for the right rear seat occupant, an electrically adjusted heel support and Easy Adjust luxury front head restraints while the one on the front passenger side is folding.

The Chauffeur package allows a more relaxed position for the right rear seat occupant. But a reclined position on a flat seat cushion would be a danger of the pelvic area sliding beneath the belt strap. Mercedes prevent this possible sliding with a cushion bag which raises the front section of the seat cushion and counteract the submarining effect. Talking about safety, the rear belts include an airbag and the seat belt has a buckle extender.

The Thermotronic automatic climate control system in the rear with two aditional climate zones for the rear seats is standard together with possibility for the driver to adjust the climate control in the back using multimedia Comand Online system.

On our test car, the optional First Class rear suite was installed. It is in fact a rear centre console with thermo cup holders and two tables which can be folded in and out like in an aircraft seat.

Looking from front and rear, there are not too many differences from the regular long S-Class. The radiator grille features three double louvres in chrome, the bottom section of the rear bumper has chrome double louvres and the Maybach lettering is placed on the boot lid. The panoramic roof and the 19 inch multispoke rims are standard.

But from profile we have had a nice surprise. Mercedes designers found a way to avoid rear massive, long and heavy doors. In fact, the rear doors has been shortened with 66 mm and the doors has no triangular window. The triangle of the doors was relocated into the C- pillar. As a matter of fact, the rear seats are situated beyond the door cutout, which creates a feeling of privacy. And this privacy could be even exceptionally because of the roller sublinds. And there are roller sunblinds not only for the rear windows but also for the small triangular windows and both could be adjust electrically. 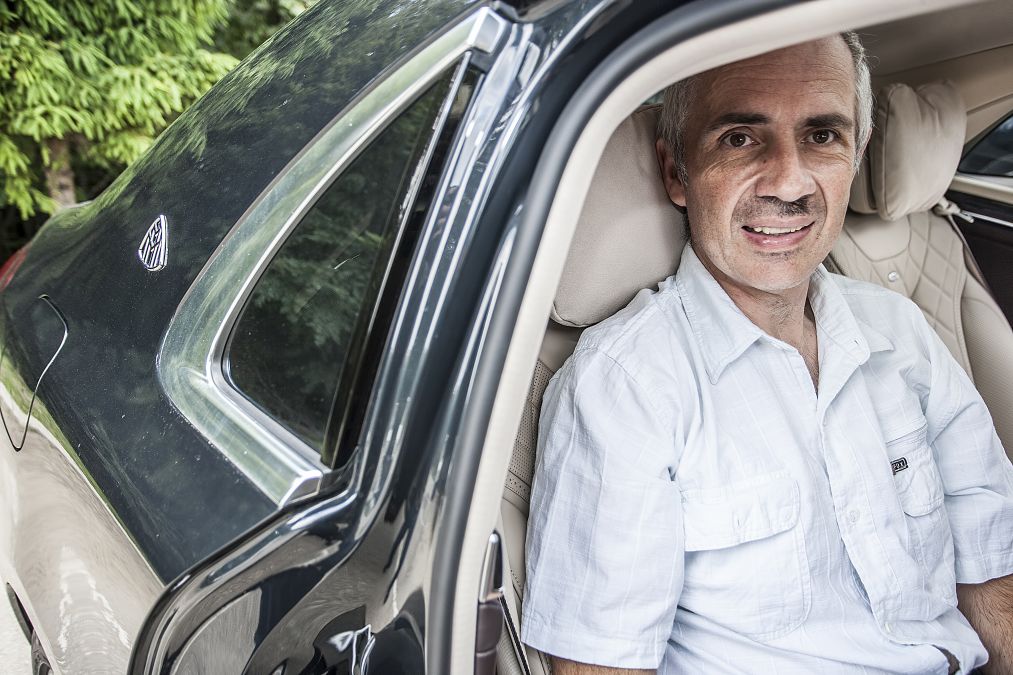 The double M inside an arched traingle –  Maybach Manufaktur logo – adorns the C-pillars while the B-pillars are covered in chrome. Definitely, from the lateral side, Mercedes-Maybach has a different personality compared with the long S-Class.

But is not so exclusive like is Rolls-Royce Ghost relative to BMW 7 Series. It has almost the same interior with the S-Class and the same engine. But on the other side, the price is much much lower than Rolls-Royce Ghost.

With all standard equipments from which many luxury things are offered only in option for the regular S-Class, Mercedes-Maybach S 500 costs only 24,273 euro more than Mercedes S 500 Long. And you get a lot of things for these money if we consider only the executive seats, the Chauffeur package, the Thermotronic climate control in the rear, the panoramic roof and 19 inch wheels plus more space in the rear.

The question is now how much confort could offer the new Maybach as regular S-Class already established new standards in therms of comfort.

The standard Airmatic suspension offers even greater comfort than in S-Class because of longer wheelbase. In Comfort mode, ride in Maybach S 500 is like flying at low altitude. Even the short bumps are absorbed with high efficiency. If you push the sport button, the suspension become more firm but is a kind comfort sport and not really a sport setting. No, there will not be an AMG version of Maybach.

The noise level is so low even at 180 km/h on autobahn so you can speak with low voice and you can hear the superb sound of the optionally Burmester hi-fi system. There is also an option for a high-end Burmester sound system. Mercedes claims that Maybach S 500 is the quietest car in the world, even more quiet than the S-Class Coupe. The very good aerodynamics and insulation has a crucial contribution to a very silent inside atmosphere.

But the new 9G-Tronic gearbox improves fuel efficiency a lot, the comfort on driving and the response is much quicker. With a broad ratio, the gearbox has also closer gears. The rev meter shows only 1,450 revs at 130 km/h in the 9th gear and goes to 1,800 revs in the 8th gear and 2,100 revs in the 7th gear at the same speed of 130 km/h. On the side, even on automatic mode, it changes gears much quicker without that unpleasant pause from the former 7G-Tronic. In kickdown mode, it downshifts from 9th gear to 5th or 4th gears in miliseconds if neccessary. Only when you go out of a bend is not so decided what gear to choose. 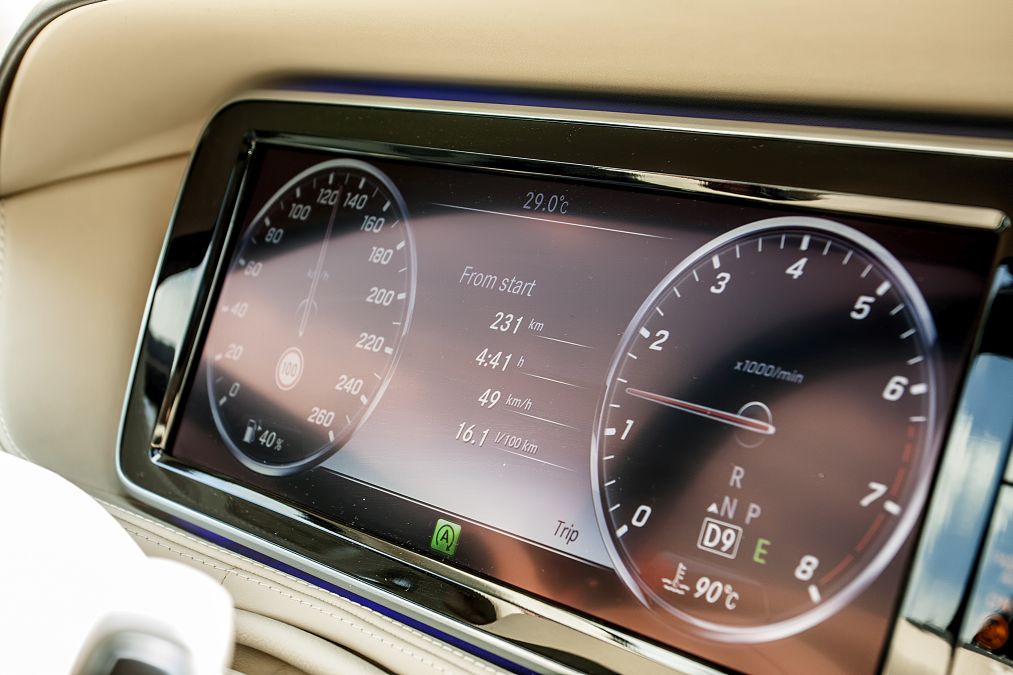 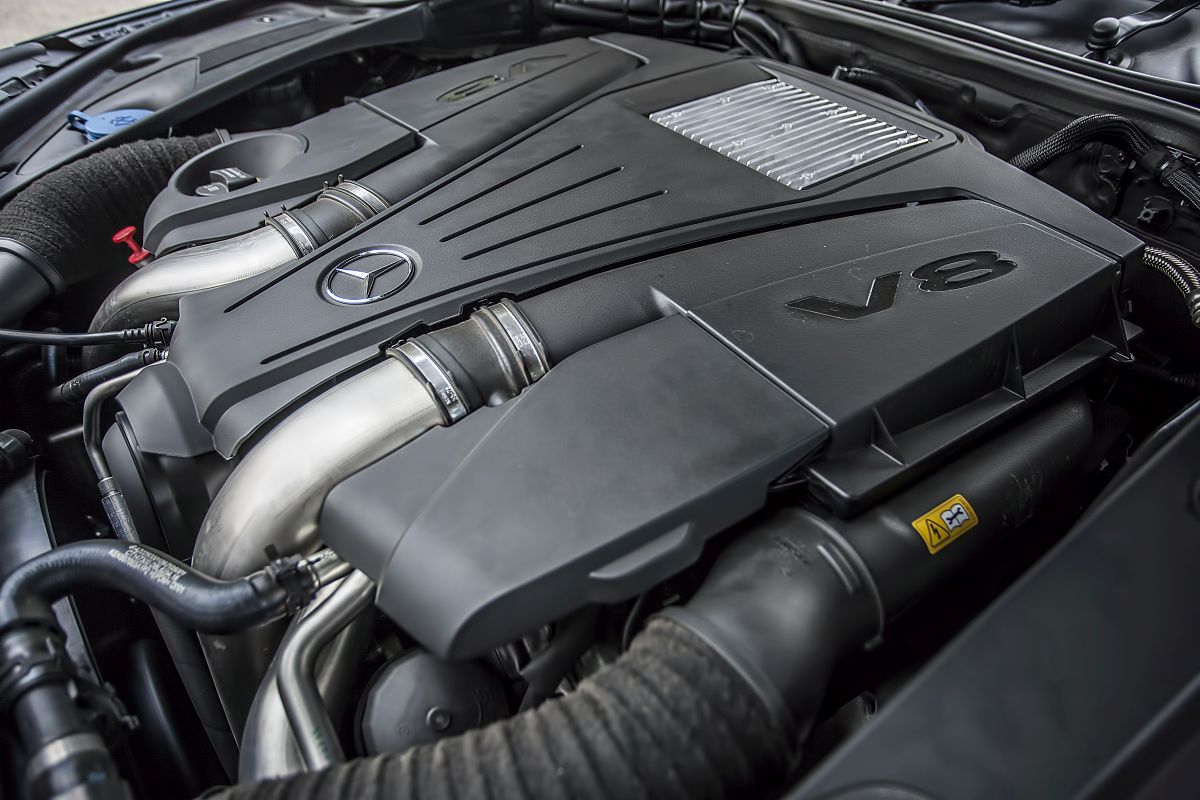 On windy roads, you feel the longer wheelbase and the overweight of 205 kg. Maybach S 500 is not so agile like the S 500 but on the other side you don’t feel the inertia of the rear part like in case of S 500 e which has almost the same kerbweight (2,215 kg). In case of Maybach the weight distribution is different compared with S 500 e which has a 200 kg battery in the trunk.

Instead of a 360,000 euros former Maybach 57, Mercedes offers now a car for almost a third of that price with relatively the same space offer and at least the same level of comfort. It does not have the exclusivity of Rolls Royce Ghost but the comfort, noise level and luxury facilities for the rear precious passengers are even better. And all these things are offered for almost a half price compared with Rolls-Royce Ghost.