Mercedes leads the way in all categories

Lucas Auer scored maximum points on the opening day of 2017 and cemented his lead on Sunday, when Gary Paffett kept Mercedes on the podium for their anniversary race in the series.

Expectations were high ahead of the new season: Audi, BMW and Mercedes adapted their cars to the new regulations and tested them extensively on three racetracks. The sporting code was equally changed for a better show – goodbye to pit instructions via team radio, tyre warmers, 3-second pit stops and processions on Saturday. Just 18 cars were entered for 2017 following a joint decision, but the caliber of racers involved kept the bar as high as we knew it since 2012.

In free practice 1 on Friday, veterans Paul di Resta and Gary Paffett were the only ones below the 1:33 mark. Next morning, times tumbled by one second and Lucas Auer stopped the clock half a second below the unofficial lap record set during winter testing by di Resta. The Austrian’s 1:31.712 made him a clear favorite for pole, while Mercedes was the car to beat, having swept the top 4 in FP2. Auer duly delievered in qualifying, with a masterful effort of 1:30.849 earning him his fourth pole in DTM. Paffett and Mortara came second and third to score their first points, with all their colleagues also in the top 10. Things were shaping up nicely ahead of the race, despite the fact that ballast came into play, compensating the qualy pace: Mercedes gained 5kg, while Audi and BMW both dropped 5. 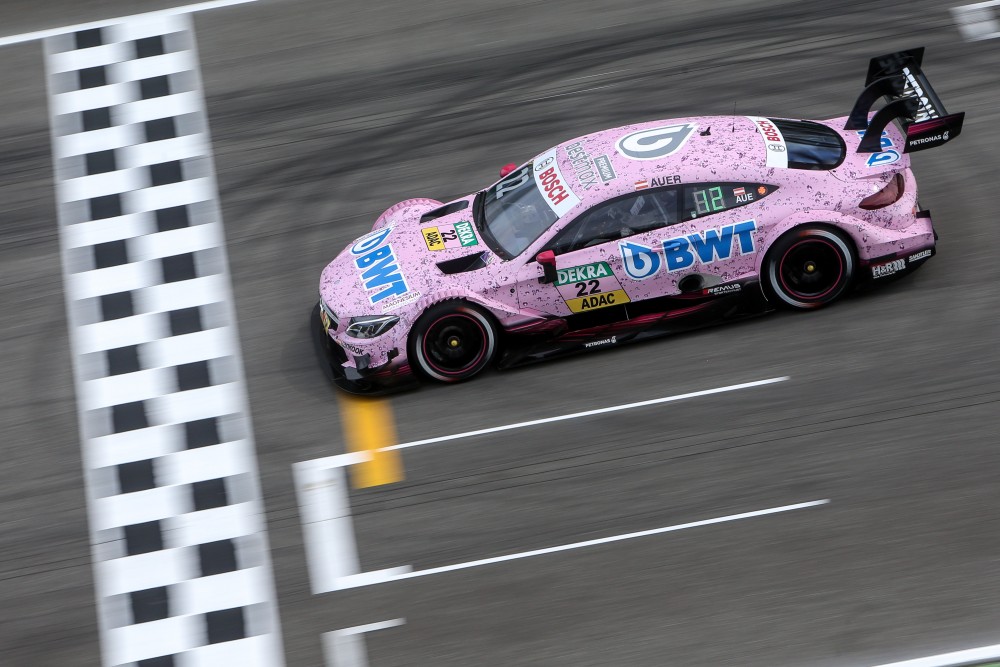 Lucas Auer had no trouble in maintaning the lead at the start, while Timo Glock emerged as his main rival after a great start. The ex-F1 driver dispatched Paffett early on and started to reel in Auer, the gap decreasing from 10 to just 5 seconds by mid-race. It was not the sharpest pit stop for the Mercedes crew, yet still Auer was lucky to get ahead of Mike Rockenfeller, while Glock lost some time behind the Audi before reclaiming second place. The chase was on and on lap 32 the yellow BMW caught up, DRS wide open. Auer defended hard, there was even a light contact exiting the hairpin, but positions never changed until the chequered flag dropped.

The young Austrian stood on top of an eclectic podium, featuring racers from all three rival squads. Mortara was critical of himself after finishing fourth, while Paffett and di Resta could only manage 7th and 8th. All 18 drivers completed the race, but Wickens and Engel were out of the points. 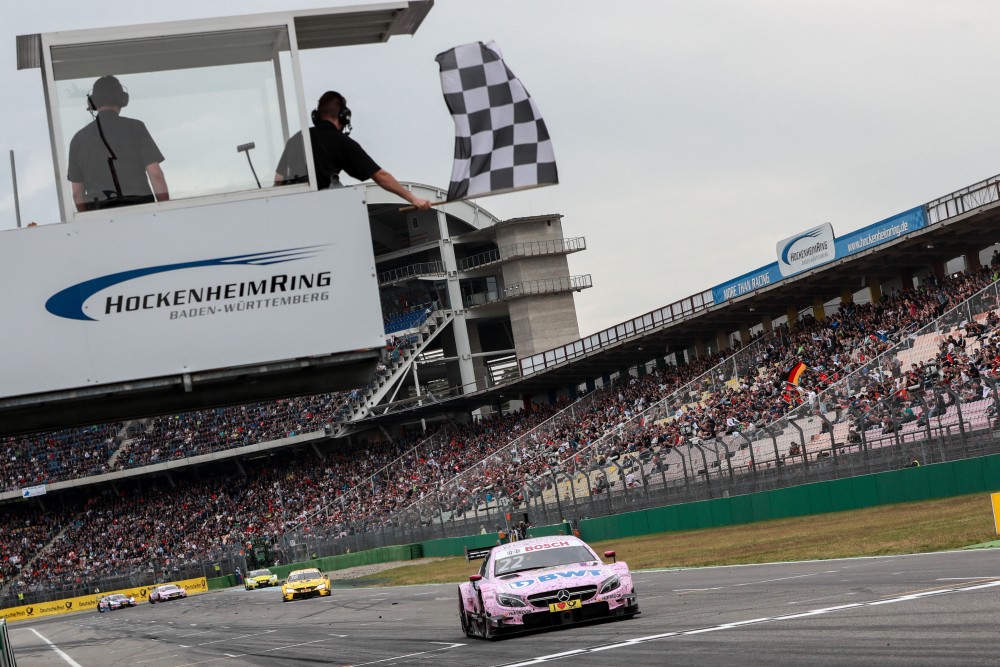 A 10kg disadvantage meant that no Mercedes ended in the top 10 on Sunday morning in FP3, but rain came into play ahead of qualifying, levelling the scores. Mortara lead the chase from the second row, while Paffett and Auer occupied the fourth row of the grid. Robert Wickens was unable to post a good laptime right at the end of the session, paying the price at the start: he tangled with two Audis in the first corner and was out on the spot.

The Safety Car came into play to clear the stricken C63 DTM. Afterwards, the field was set for the first IndyCar restart in the history of the series. It was a messy one, race leader Timo Glock being swallowed by the pack. Jamie Green moved ahead a bit too early, with Gary Paffett emerging as rival. The Britons hoped for typical weather and it didn’t take long for their wishes to come true, drops of rain effectively ending all hopes for half of the peloton, as they had already pitted for new slicks and were now forced to change tyres once again. 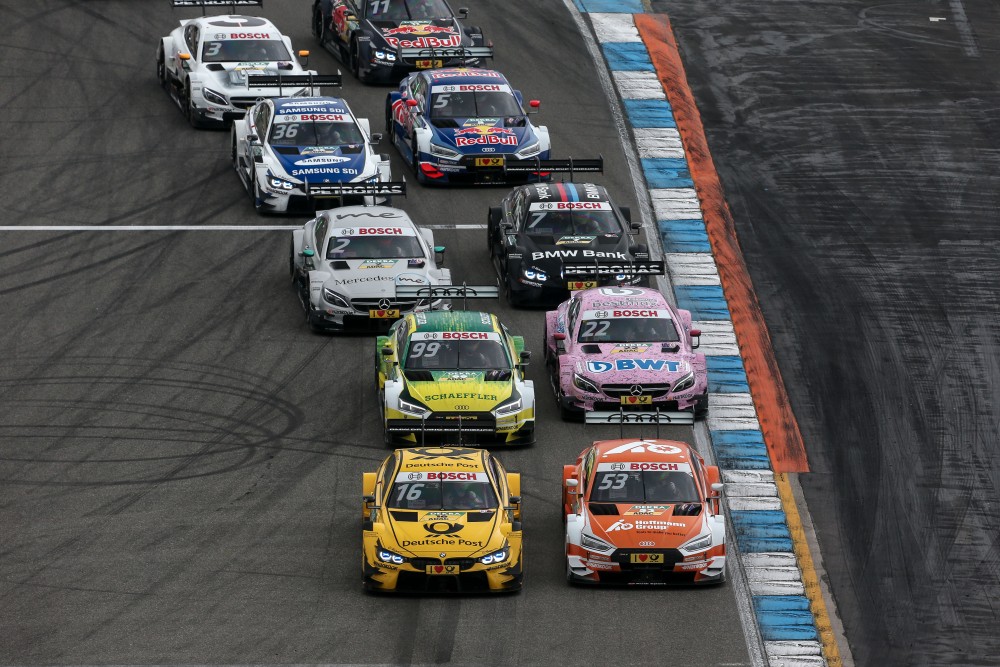 Tough luck for Glock, but a chance for Wittmann to step onto the podium after having started down in 17th. Ahead of him, Paffett couldn’t match Green’s pace, despite the penalty incurred by the Audi driver after that restart infringement. Green served his 5-second stop&go, stalled the engine, changed tyres quite slowly and still emerged ahead. Put it simply, there was nobody able to match him on Sunday, just like Mattias Ekstrom blew everyone apart two years ago in similar conditions.

Despite all that, Gary Paffett was really content to be on the podium for the 400th Mercedes outing in DTM. Chapter one was written back in 1988 and now we can look back at 176 victories in the powerful national touring car championship. Lucas Auer bagged important points in fourth, di Resta was sixth and Maro Engel scored a solitary point on his return. Edo Mortara endured a miserable afternoon, finishing last, one lap down. 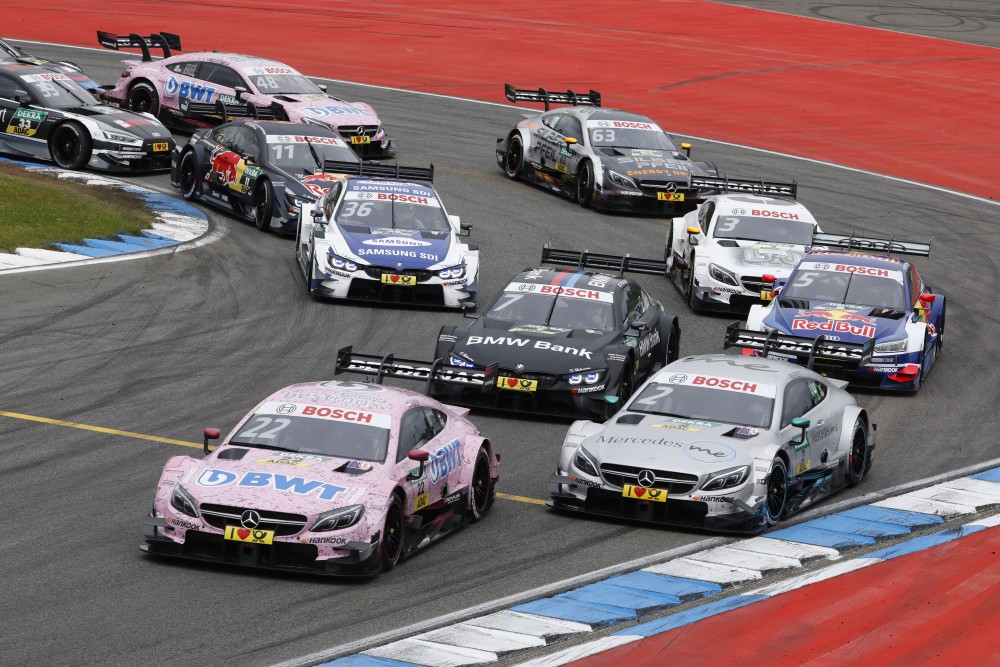 Auer leads the drivers standings with 40 points, followed by Green and Paffett on 26. Mortara has 13, di Resta 12, Engel just one. Robert Wickens hasn’t scored yet.

Audi (79p) and BMW (43p) are playing catch-up in the constructors table, where Mercedes sits on top with 92 points ahead of Lausitrzing (May 20-21).