With more than 200 horsepower and four-wheel drive, the Mercedes GLA 250 4Matic and Mini Countryman John Cooper Works All4 want to rule the sporty compact SUV segment in the premium arena. Auto motor und sport examined the two in their first comparison test.

On the matter of compact SUVs, which are also sporty, we have become accustomed now. Also, that the Mini specifically as a Countryman is not quite a mini anymore. That starts with the name Mini Countryman John Cooper Works All4, which hardly fits in one line, and stops in the dimensions: the new Countryman is 4.30 meters long, about 17 inches longer than its predecessor. And the Mercedes? The Germans invent shortcuts that promise more in the case of the GLA 250 4Matic, which even with a two-liter turbo gasoline engine, it is not a rough terrain machine despite four-wheel drive as standard for the 250 variant.

Both the Countryman in its sharpest form as JCW (we cut it off at this point to have more space for more useful information) and the GLA 250 as the strongest non-AMG model of the series want to be sporty lifestyle crossovers with at least something useful. The protagonists celebrate this quite differently at first glance. 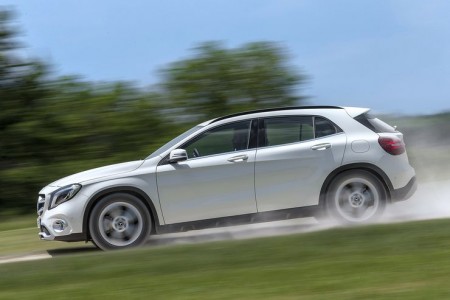 The GLA is optically more restrained with its double-louvred grille. The body shape corresponds to the compact A-Class, with all its peculiarities. This is especially true for the rear passengers, both entry and head and legroom falling short of. Even so, the passenger seat can be folded down, creating a more than two-meter-long cargo area. Otherwise, the load compartment is due to the flatter rear window including a smaller flap and only two instead of three parts foldable rear bench less usable than in the mini. Nice idea: the folding box for purchases under the loading floor.  Up front, the comfortable seats suggest more comfort than sportiness. The analog instruments are easy to read, the operation of the expensive Comand online infotainment system (3,522 euros) via touch or rotary-push control runs smoothly. However, the keyboard in the center console makes the system seem a bit antiquated.

Quite different, Mini’s interior is still playful despite the newfound seriousness of the brand. Chromed toggle switches, knobs, fancy animations and LED light games are well received by the hip target group, all others are more likely to confuse them. On the other hand, analogue instruments and the optional head-up display on the removable plastic disc (600 euros) provide clarity in the operation of important driving functions. To get into the depths of infotainment, on the other hand, it takes some getting used to. Who does not like it, can simply use the excellent voice control. 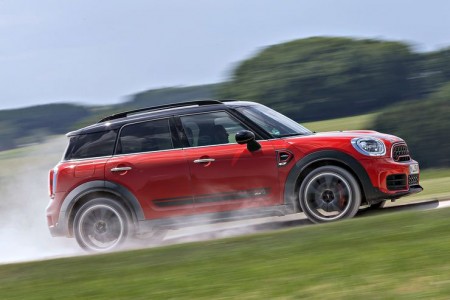 In contrast to the dignified Mercedes interior, the John Cooper Works is emphatically sporty. The almost bowl-shaped seats also offer people with a broad stature a solid lateral support. Leather and Alcantara also look more noble than in the GLA. Four passengers, the fifth seat is both more theoretical in nature, have noticeably more space in the mini. This also applies to the load, the mini swallows 450 to 1.390 liters, which is significantly more than in the GLA. 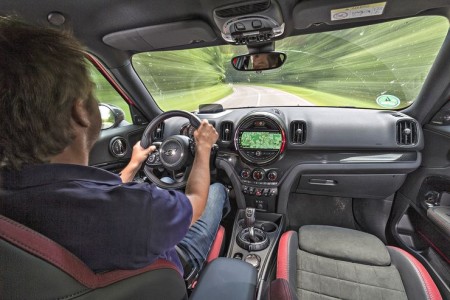 The top countryman costs at least 39,500 euros (in Germany), but it does so with a manual gearbox. The eight-speed automatic transmission with optimized, ie faster shift times costs 2,100 euros extra. This puts the JCW at the top of the mini model range. The GLA costs with standard seven-speed double clutch gearbox about 500 euros less than the Countryman. However, customers need to pay for extras such as LED headlights (1,041 euros) or an Adaptive suspension (1,333 euros). Since the infotainment system is significantly more expensive, the JCW costs less with comparable equipment. If you are looking for more power for the Mercedes, you will find it at AMG: the GLA 45 from 56,852 euros offers 381 hp. The GLA 250 is already very fast on the road with the powerful 211-horsepower gasoline engine. This is mainly due to its 350 Newton meters, which are already starting at 1200 / min.

The GLA pushes powerfully – thanks largely to all-wheel largely slip-free and a sprint to 100 km / h three-tenths faster than the Mini. The other way around, the Mercedes needs a good two meters more than the JCW to come to a stop. This costs points in the safety chapter despite many driver assistance systems. 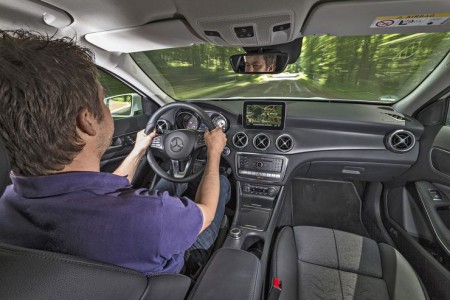 On the highway, the GLA is the more balanced, but not exactly the sportier SUV. In curves the GLA shows predictable understeer and thanks to low body height and optional adaptive damping, does so without too much roll. Long bumps are swallowed by the suspension even in the sportiest setting with a certain degree of comfort. The same applies to the dual-clutch transmission, which always served the right gear, but acting not quite as nimble and polished as the converter automatic of the JCW.

With its 20 hp nominal superiority, the mini longitudinal dynamics can play only over 130 km / h. The artificially created engine sound, which sounds like a tin can synthesizer, does not help either, so you’d better disable it. In addition, the mini consumed in the test section 0.3 liters more per 100 km. 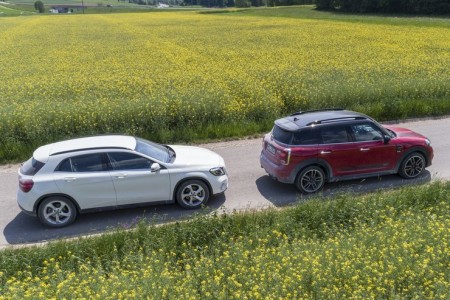 On curvy asphalt the JCW starts its dynamic program. It reduces the comfort of the two-stage dampers in favor of lower body movement in Sport mode, makes for a good mood thanks to the precise and sensitive steering and agile and safe handling for this class.

A nice gimmick is the off-road mode. As in the GLA, the off-road capabilities are limited to dirt roads, although the four-wheel drive systems work so harmoniously on both even on loose ground that you hardly notice that they exist.

The Mini wins because it’s both more practical and entertaining than the GLA. The extreme John Cooper Works design must please, but we have already gotten used to it. 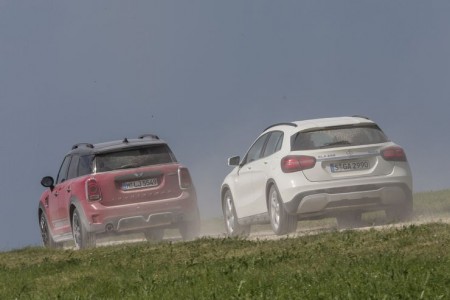