Mercedes G-Class Pick-up as a successor for Mercedes X-Class?

The Mercedes X-Class built on the platform of the Nissan Navara and produced at the Nissan plant in Barcelona was not a success and for this reason production was stopped this month. An instagram user,  jb cars, imagined a Mercedes G-Class Pick-up. Will Mercedes re-enter this segment?

Daimler’s new president, Ola Kallenius, has decided to give up all unprofitable models. Thus, the first victim is the Mercedes X-Class pickup whose production will be stopped this month.

Very poor sales contributed to the decision to stop production. Only 16,700 units were sold in 2018 and 15,300 in 2019.
In addition to the 4-cylinder engines taken from Nissan, the Mercedes X-Class also has a version with a 3-liter V6 engine and 258 hp, but this was not successful either.

Mercedes hoped that a more powerful version could attract those looking for an adventure and lifestyle car instead of a luxury SUV, but the marketing strategy was not correct.
The fact that the Mercedes X-Class was not available on the US market, a huge market for pickups, contributed decisively to the failure of the pickup.

When making the decision to enter the pick-up segment, Mercedes-Benz chose the solution to cooperate with Nissan because it considered that a Mercedes G-Class pick-up is too expensive. Nissan Navara starts at 32,000 euros and its Mercedes X-Class derivative starts at around 38,000 euros, while a Mercedes G-Class has a base price of 102,000 euros.

An Instagram user jb cars who has some modernized renderings of the BMW Z8 or Ferrari F40, imagined what a Mercedes G-Class pick-up might look like.
The strategy of deriving a pick-up model from a classic off-roader worked very well at least in terms of design in the case of the Jeep Gladiator pick-up derived from Jeep Wrangler. Why wouldn’t it work for the Mercedes G-Class? 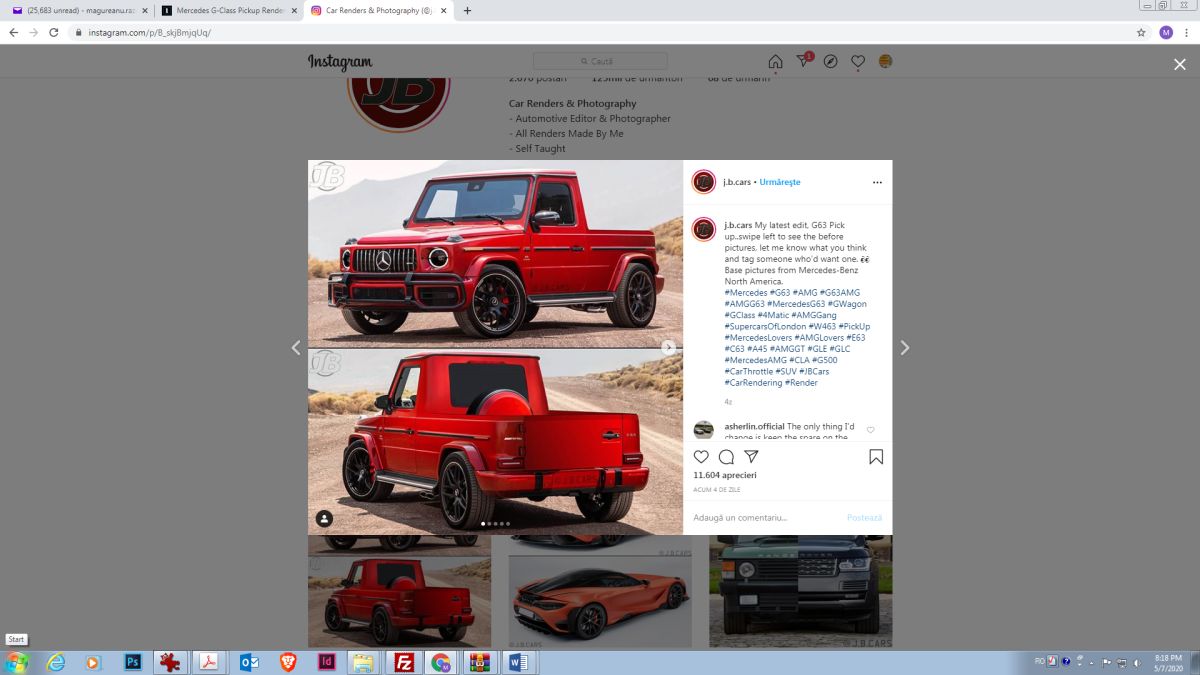 Mercedes X-Class production will end this May

The rendering shows a surreal pick-up with some big rims and a lower ground clearance than the G-Class. Up to the center B-pillar the car is identical to a Mercedes G-Class, having the same almost vertical windshield that looks great on a pickup.

The surreal design continues even more obviously at the rear. The taillights are taken unchanged from the G-Class and the rear window is not fixed as in all pickups. In its place we find the tailgate (!) from the G-Class that opens laterally in the bed (!) And the spare wheel is attached to the tailgate. 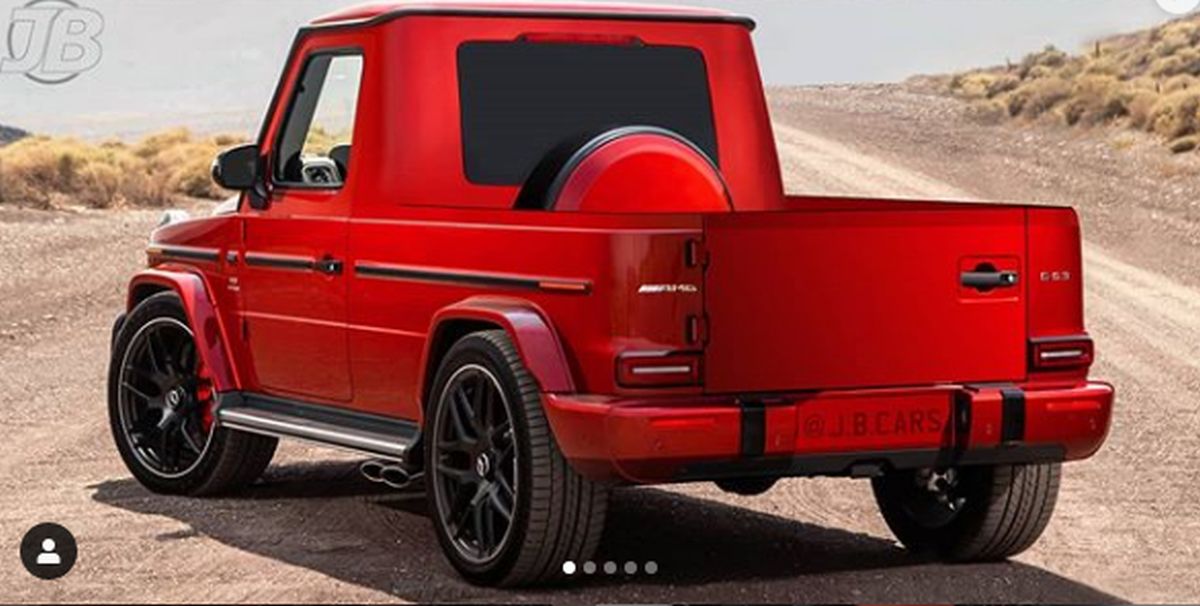 It is obvious that such a solution cannot be adopted in series production and in addition the drawn version with only two seats is not practical.
On the rear you can see the inscription G63 which means that under the hood is the 4-liter bi-turbo V8 with 585 HP.

Or who knows? Maybe the failure of the Mercedes X-Class came from the fact that it was not a real Mercedes while the Mercedes G-Class pickup would be a 100% Mercedes. 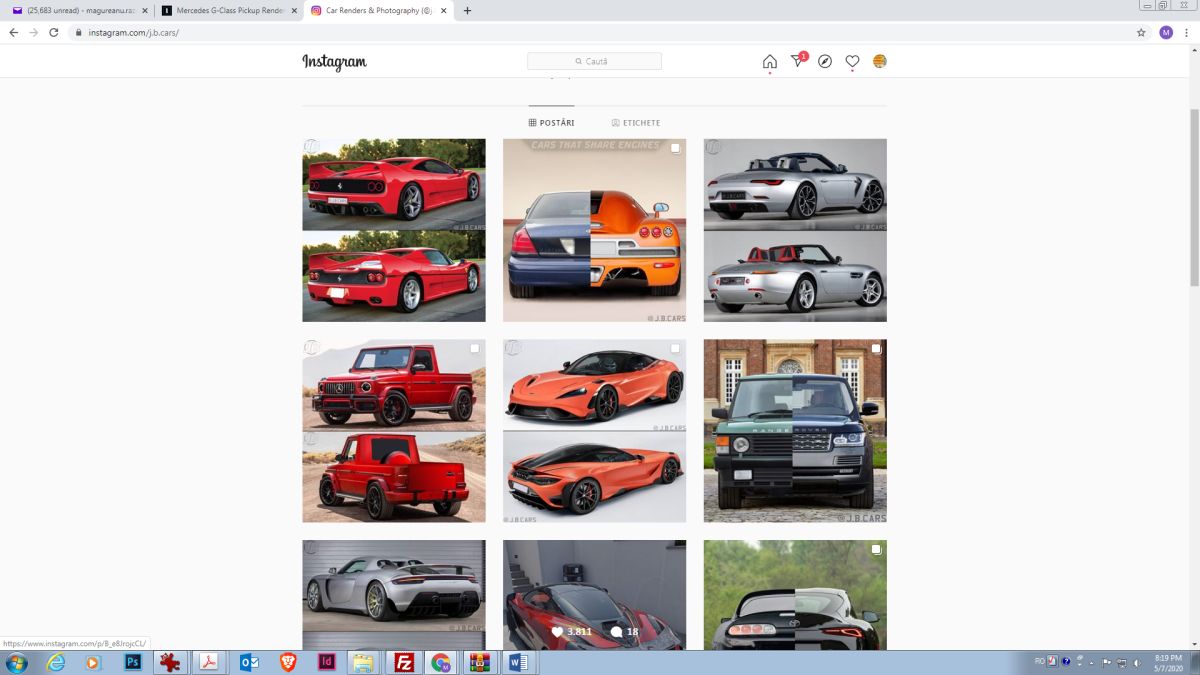