After keeping fans and media outlets on their toes with a series of teaser-pictures, Mercedes-Benz finally unveiled its self-driving F 015 Luxury in Motion concept in Las Vegas, Nevada, at the Consumer Electronics Show 2015.

UPDATE: After the official launch and presentation during CES 2015, Mercedes-Benz released official technical information regarding its self-driving F 015 Luxury in Motion concept.

As it can be seen from the pictures, the B pillars have been removed and the vehicles’s doors open at a 90-degree angle, in order to allow quick and easy access to the lounge-like cabin.

In terms of powertrain, the F 015 autonomous prototype uses an upgraded, more evolved version of the propulsion system introduced by the 2011 F125! research vehicle. In other words, a plug-in hydrogen fuel cell electric setup offering a range of 1,100 km.

Power is delivered from two electric motors installed in the rear, each offering an output of 100 kW and 199 Nm. These resources are sent to the rear axle and stand for a total output of 200 kW and 398 Nm.

With these figures on paper, the F 015 Luxury in Motion concept can accelerate from 0 to 100 km/h in 6.7 seconds and reach an electronically-limited top speed of 200 km/h. In addition, F 015 uses lithium-ion cells that can be charged through an inductive process and offer a range of 200 km.

In order to store the hydrogen used for generating electricity, the prototype has been equipped with 5.4 kg tanks at a 700 bar pressure.

All the hype around CES 2015 was focused this morning on the Mercedes-Benz stand as the Stuttgart-based company took the wraps off a new concept car: the autonomous F 015 Luxury in Motion prototype.

Following a set of teaser-pictures released in the past few weeks, the F 015 Luxury in Motion made its debut in Las Vegas, looking like a sleek egg-shaped pod with a huge passenger compartment. 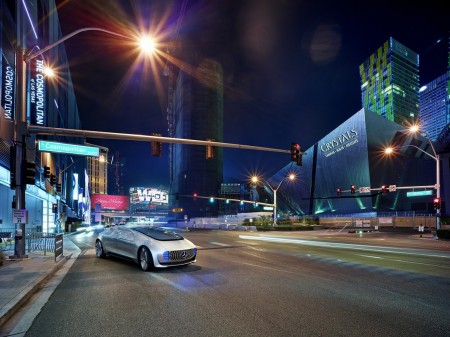 According to Mercedes-Benz, the prototype is offering maximum space in a lounge-like interior, while elevating comfort and luxury to a new level. In addition, the research vehicle is said to be in a continuous exchange of information between its system, passengers and the outside world. 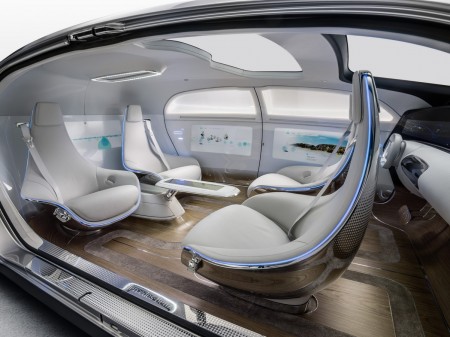 From the pictures released by Mercedes-Benz it is very clear that one of the main central points of the concept revolves around the variable seating system. This solution offers four rotating lounge chairs that allow a face-to-face seat configuration.

In addition, according to Mercedes-Benz, all passengers can use their time aboard to work, relax or communicate. To ease access in and out of the car, the electrically powered seats swing outwards by 30 degrees as soon as the doors are open. 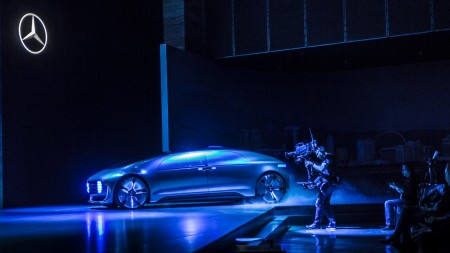 “The single most important luxury goods of the 21st century are private space and time. Autonomously driving cars by Mercedes-Benz shall offer exactly that. With the F 015 Luxury in Motion, this revolutionary concept of mobility becomes tangible for the first time,” explained Dr Dieter Zetsche, Chairman of Daimler AG and Head of Mercedes-Benz Cars. 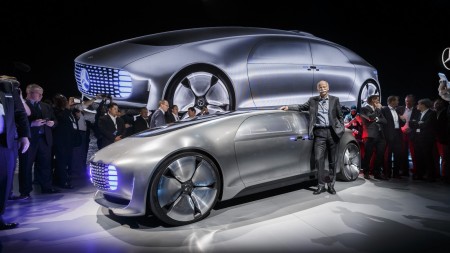 Inside, the F 015 Luxury in Motion concept offers an interface made up of six display screens integrated into the instrument panel and the rear and side panels. Therefore, passengers can interact with the vehicle via hand gestures, eye-tracking or by simply touching the displays.

On the outside, one notable feature is the pair of LED fields at the front and rear that change color based on the car’s current driving mode: white in manual, blue in autonomous.

Although Mercedes-Benz said that the vehicle is electrically propelled, there is no technical information available at the moment. We will keep you updated as more details should surface later today.

For a more detailed view of the Mercedes F 015 Luxury in Motion concept in action, make sure you watch the two short video presentations below: